The Hero XPulse 200T is a machine which is built keeping in mind the idea of a tourer, but this motorcycle really is a multi tasker. XPulse 200T is priced starting at Rs 97,000/- (Ex-showroom India) 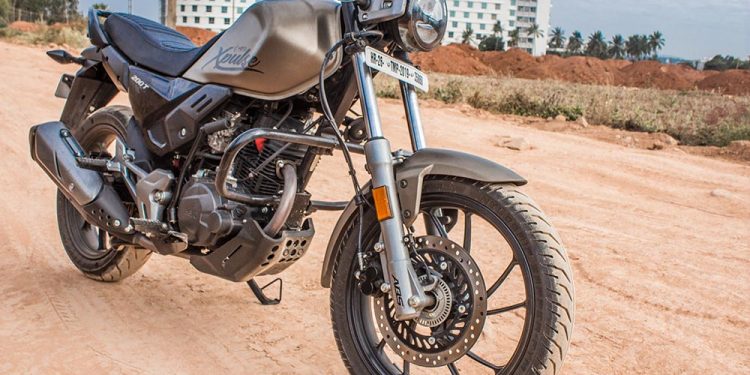 When Hero got us the XPulse cousins, a lot of emphasis was on the off-roader. After it absolutely surprised us, it was almost immediate to taste the road going version, the XPulse 200T to see what it could do.   To its name, the T stands for touring and Hero has differentiated the 200T with a set of road tyres, different styling and a few m ore changes. This is a motorcycle which is born by fusing the Xtreme 200R and the Xpulse 200, but when that happens, you get a different package altogether.

How different is it? With the way it looks, Hero has tried to take the retro route but I believe the styling could’ve been carried out slightly better. It gets the same headlight as seen on the XPulse, same body panels and even the same tank. The changes are seen with the exhaust and alloy wheels, which is straight off the Xtreme 200R. The similarities with the off-road Xpulse also extend to the instrument cluster and a rear luggage rack. Finish levels are decent to the standard eye, but really good for a Hero.

The change in the motorcycle is felt when you are in the rider’s seat. The handlebar is upright and first impression of sitting on the seat meant comfort that would make real sense when you put this machine to some use on the Highway. True to that, this is a rather comfortable motorcycle to ride on the highway. Although the rider feels comfortable, the engine doesn’t. The XPulse 200 T gets the same 200cc engine as on the XPulse and the Xtreme which makes 18.4ps of power and 14.1NM of torque.

The 5-Speed transmission unit is sorted off the Xtreme and feels rather hard to live on the highway. I say this because the gear shifts are hard – at least the bike I got – and you end up having to use your full foot power once in a while to shift up and down. But as you reach the 5th gear and get yourself onto cruise mode, the motorcycle feels really comfortable doing speeds of 70-80 kmph easily, but takes a hit as soon as it hits 90 kmph mark. The vibrations start to creep in and that is not a pleasant feeling.

I did get a chance to cross the 100 Kmph mark, and to my surprise, the power above 7,500 RPM is rather nice! A slight twist of the wrist gets the bike climbing numbers easily, at the expense of comfort. Honestly, I did not feel confident pushing the machine to check the top speed.

The telescopic front suspension does a fair job of cushioning bumps and the 7-step adjustable mono-shock at the rear meant you can tune it to your comfort. The setup in not too soft, nor is it too hard. It falls somewhere in between, but with 17inch wheels at both ends, I would’ve liked a better suspension setup.

Things change when you ride the XPulse 200T in the city. I understand this is a tourer version – according to the name – but it is not really the case in real world. I enjoyed riding the XPulse 200T more in city than on the highway. The front end is light and easily manoeuvrable, the power is decent enough to beat most city traffic and most bad patches are dealt with rather well.

For the machine as it is, it is not something that can be pushed around too much and asked to behave. It just doesn’t do that. The reason being soft suspension and the ergonomics of the motorcycle. But if you do get to ride this machine on plain, traffic free roads, the joy of riding a well made Hero is evident.

But there are still a few improvements that need to be addressed, and to start with, it has to be the gear shifts. I mean, good luck slotting it in neutral every time you stop and go in bumper to bumper traffic. Fuel injection would’ve gone a long way, USD forks would make a world of a difference, but again these are street bike tech.

The Hero XPulse 200T is a machine which is built keeping in mind the idea of a tourer, but this motorcycle really is a multi tasker. I wouldn’t say the best multi-tasker, but it can still do the job. For ethusistats, we need something which can do at least one of it in the way it’s supposed to and talking about the off-roader XPulse 200, which comes at Rs 1.05 Lakhs Ex-Showroom and the XPulse 200T coming at Rs 97,000 ex-showroom, my money would go to the off-roader.