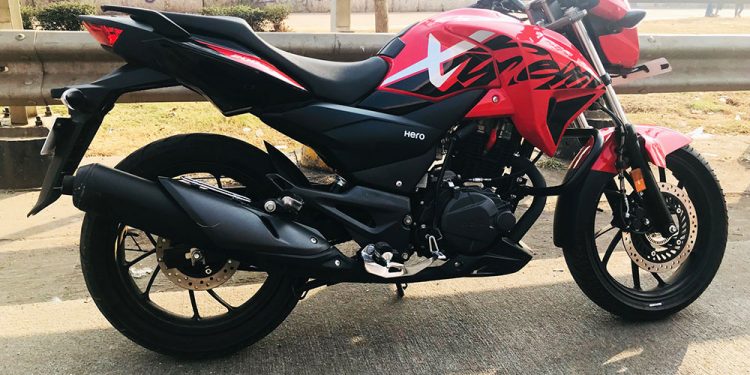 India’s most selling 2-wheeler brand has once again stepped inside nations fastest growing segment 160-200cc where Hero clearly lacked. After the much success of its iconic ‘Karizma’ and ‘Karizma-R’, the ZMR series faded out really soon. Hero needed to set foot in higher capacity segment as it has no market share in Premium bikes. 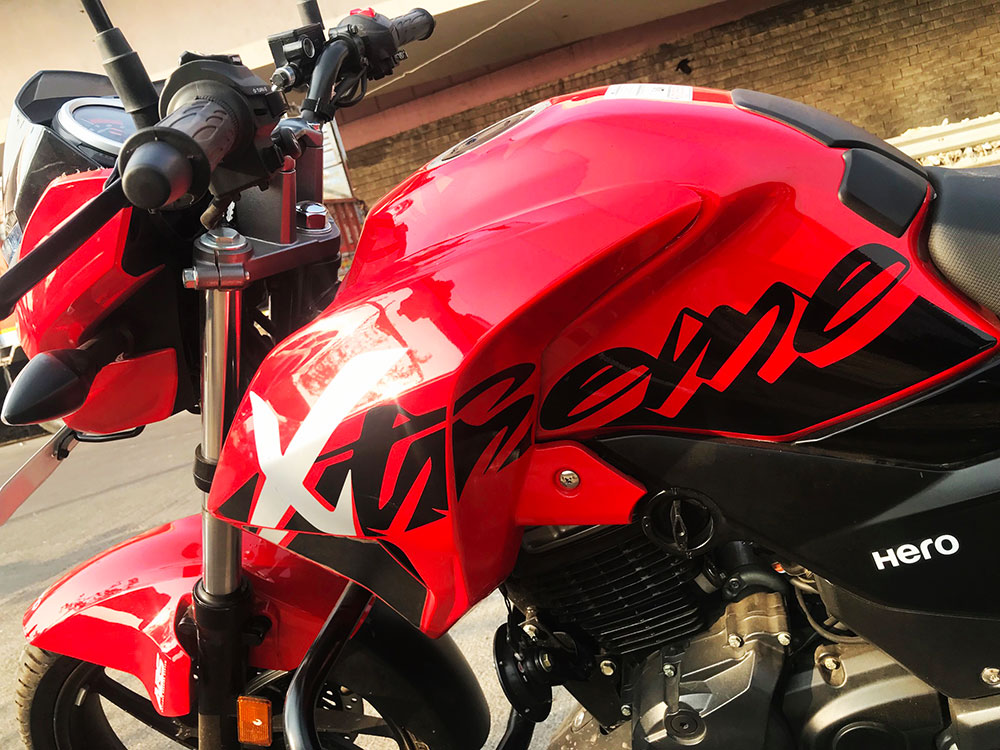 Hero first show-cased the concept 200S at the Expo and eventually took months to make it to the production. The Bike is priced aggressively compared to its rivals Bajaj Pulsar 200NS and TVS Apache RTR 200; ABS as standard offering and PAN India market, Hero can certainly except some good numbers from this Bike.

We had the bike for a city ride to understand aspects of the Bike involving regular usage by a user in City condition.

Even at 89,900 (ex-Showroom) buying a bike (or even upgrading from smaller cc) is a big deal for some people as they want bike to be worth for every buck they spend. Is it really an everyday bike and worth buying? Lets check it out. 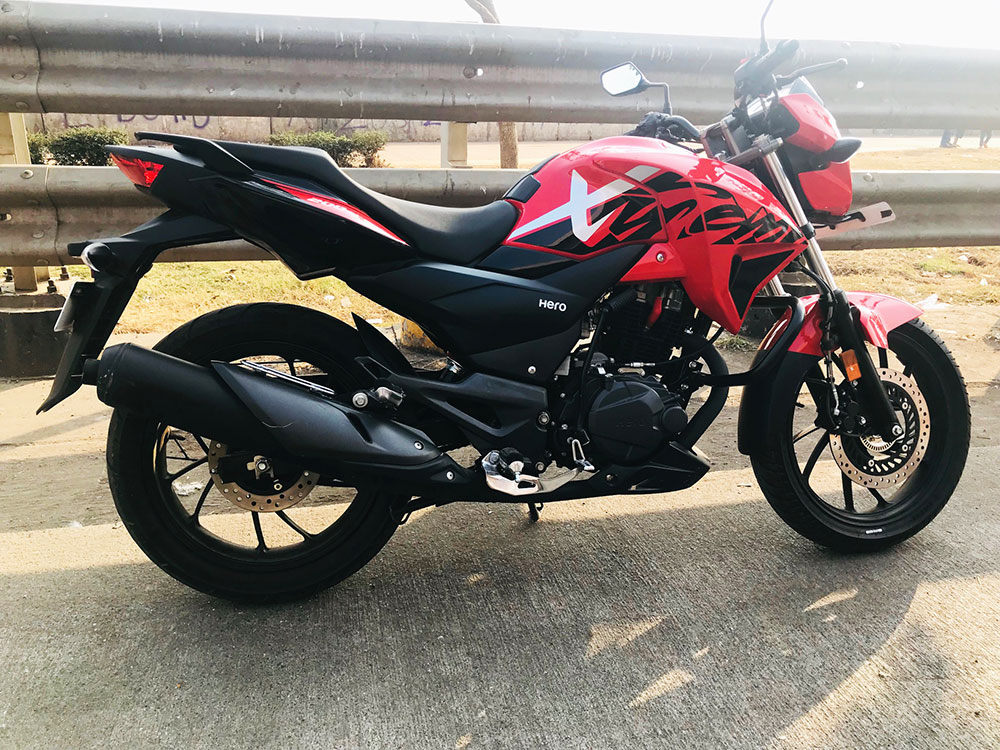 The design looks quite basic. A bulky fibre body covering the fuel tank with huge brand decals, Straight Matte Black handle bar fitted with the regular switches. Split Grab Rails, bulky and long exhaust, LED on DRL, taillight, indicators and halogen Headlight. Telescopic forks suspension, 8 step adjustable monoshock, Disc on both tyres (the front fender shouts at us stating that it has ABS). Comes in 5 dual tone shades (We had Red, looks the best amongst all).

Compared to the existing 200cc bikes, The 200r lacks the appeal of being masculine. Knowing the bike is specifically targeted to attract buyers under 30, the design lacks the muscular or sporty look. Only cosmetic addition that highlights the bike for this category are those tank extensions. The fuel tank gets those muscular shrouds with knee recesses gives a good grip of the bike. The tank pad looks cool rest the bike is very lean. The rear section adds some charm to bike. Split grab rail looks neat, tapered tail section with smooth matte black finish and stylish LED tail lamp. The Exhaust is Bulky and has no aesthetic appeal. Its quite a fat and long muffler (doesnt even sound good). The rims have smooth curvy designs that holds tubeless 100/80-17 at front 130/70-17 on rear tyres. 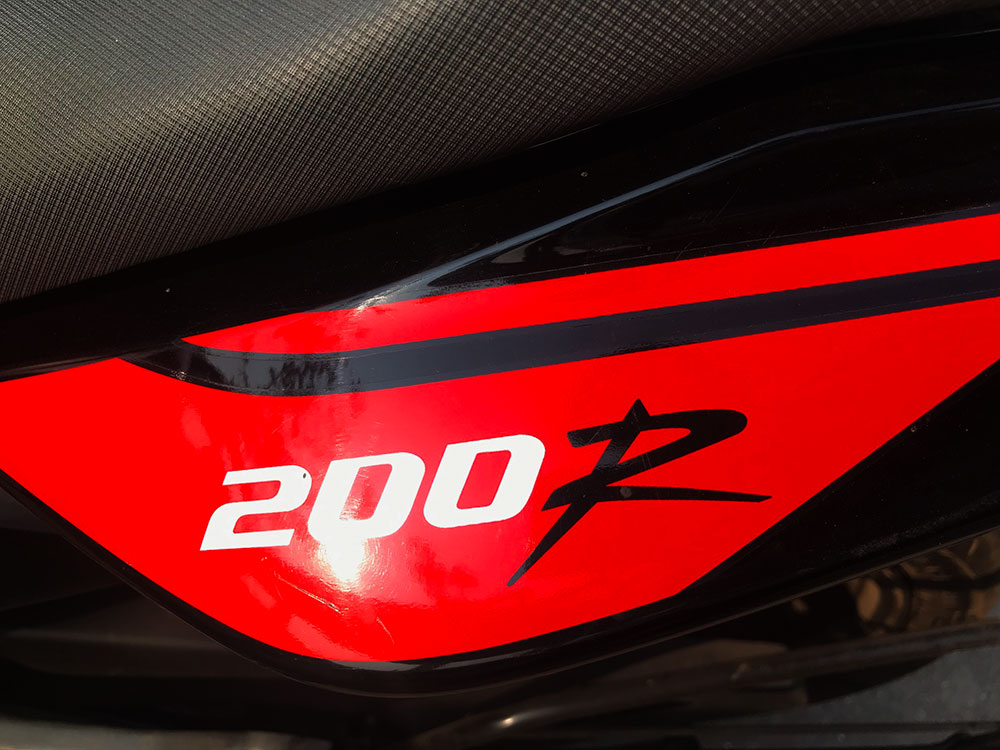 The straight & low handle bars are not exact ride comforting unit. Rider seat is low and makes the posture upright with most of the weight coming over the wrists that made it less agile to move in the city traffic. Turning radius is less too which makes taking full turn little cumbersome. Overall ergonomics shouldve added to make a city commute pleasant and less stressful over shoulder and wrist, but it doesnt (knowing it took them years to get the bike into production). 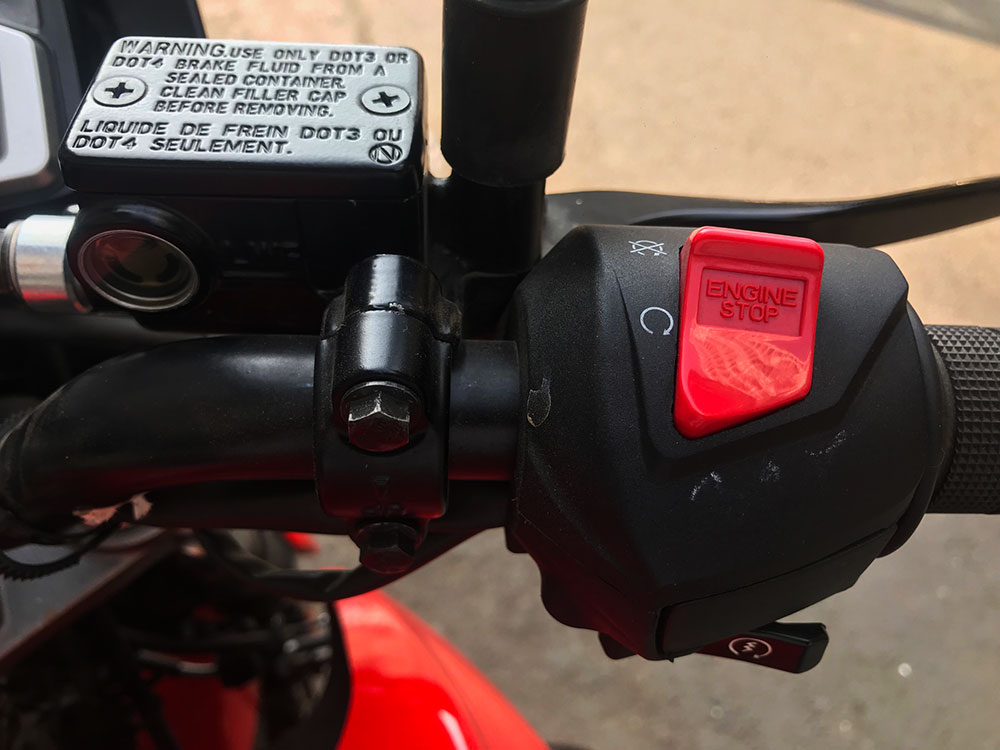 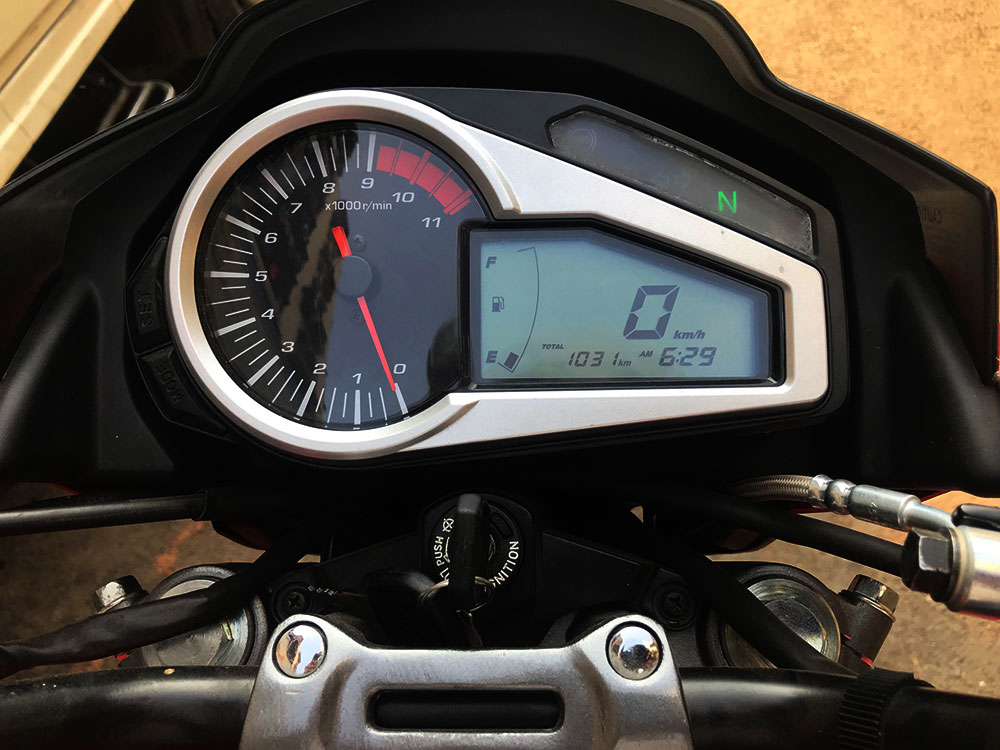 The very basic, yester-year looking, part analog, part digital instrument cluster highlighting speed, odo, trips, fuel, time in digital and engine revs on analog. ABS, turn, side stand and neutral indicators are light lit over the side. With no gear indicator, battery strength, single channel ABS (only on the front) Hero has kept its focus on cost effective offering rather than standing out amongst its competitors.

Overall the bike is good but definitely not a head turner and may not appeal to its target audience. 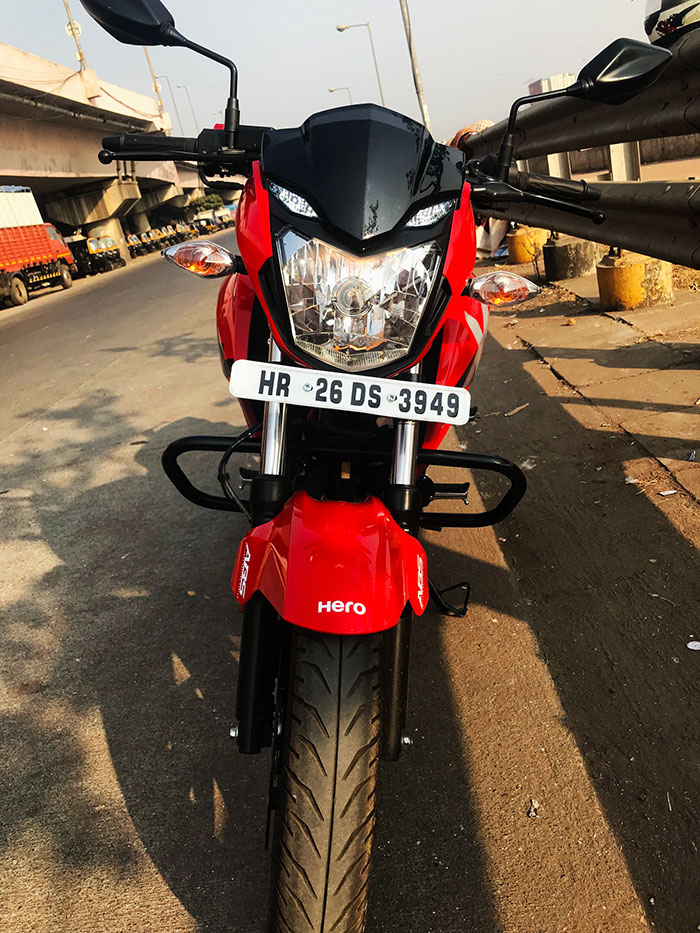 I really liked the way machine behaved in mid-range giving superior acceleration and smooth gear shifts. High torque and high gear ratios makes overtaking very easy. Infact, at 2nd and 3rd gear, as you open up the throttle it gives a surprise push helps you gain more confidence in controlling the bike. But as you get along faster and nearer towards the red line, it begins vibrating over the handle bar and you can hear the engine getting stressed. This is where the 200r lacks performance from its competitors. While redlining on every gear it feels the engine is running out of rawness that a 200cc bike should offer. After some constant acceleration the engine heated up. Oil-cooling could’ve helped to get this off in my reckoning. 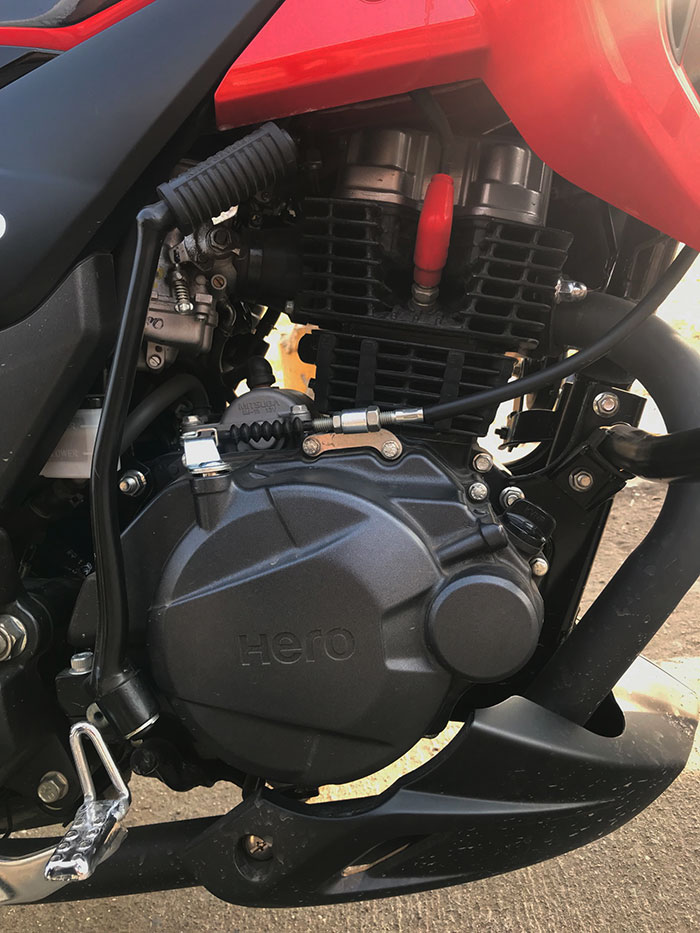 The performance isnt that thrilling, for a regular city commute its not that disappointing either. For the purpose it is made for, it is likeable in terms of power delivery and acceleration. 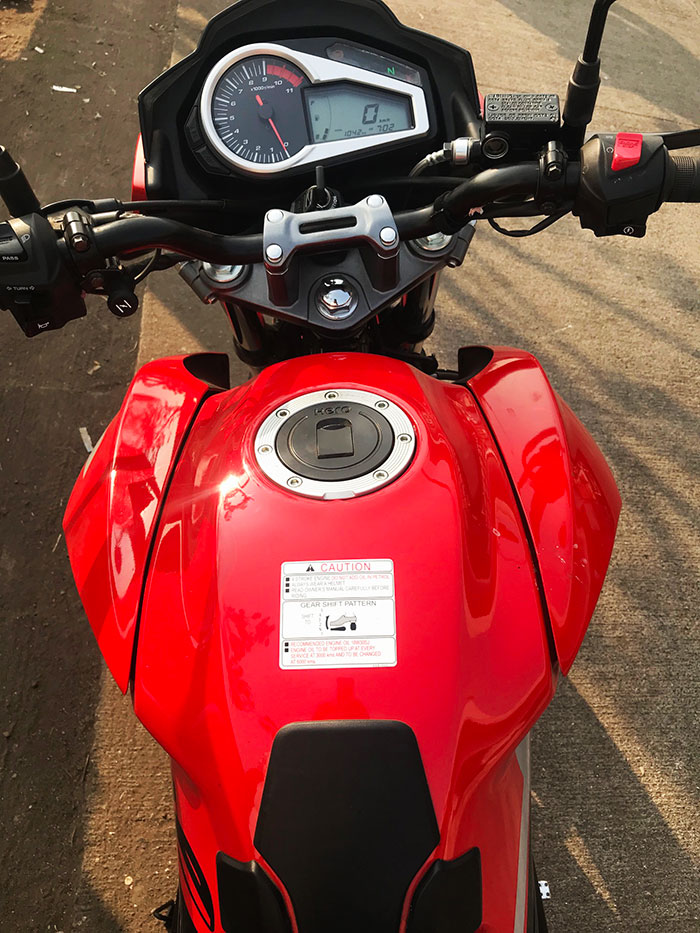 The straight sitting position coupled with straight handlebars which makes the rider sit-up putting direct stress on the wrist and shoulder is worrisome. It can get easy to manoeuvre through traffic only for those who has experience in riding bikes. 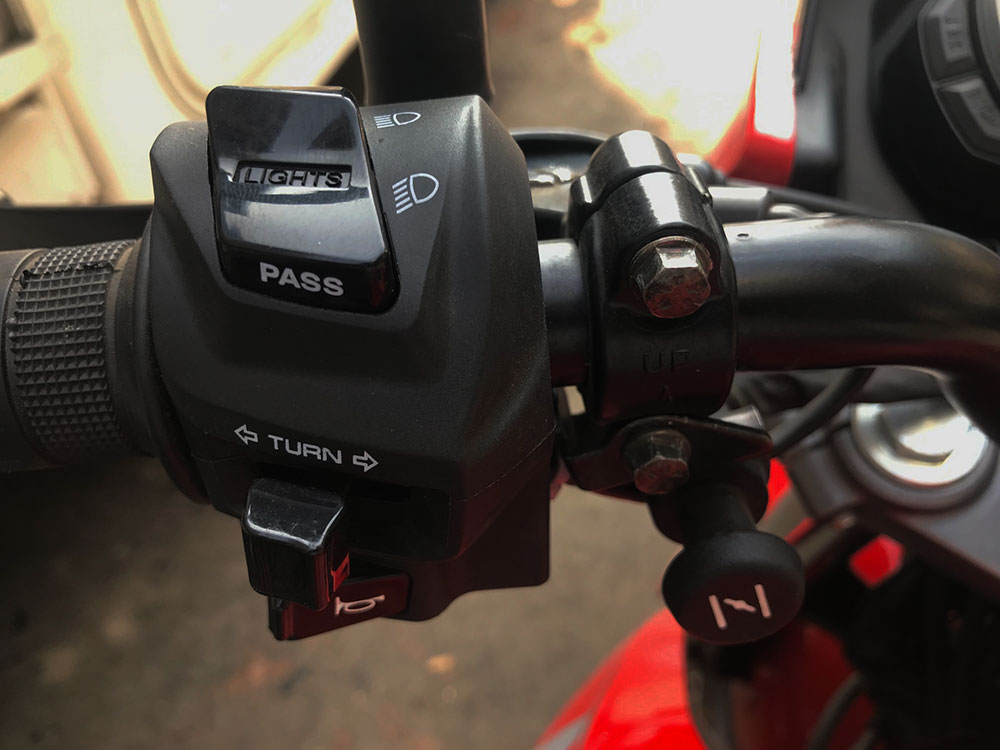 The foot rests on the bike is improperly placed because of which everytime, while at a standstill, one has to spread legs wider to touch the ground. The pegs comes directly by side and when you lift the legs back up the foot pegs shuts in. 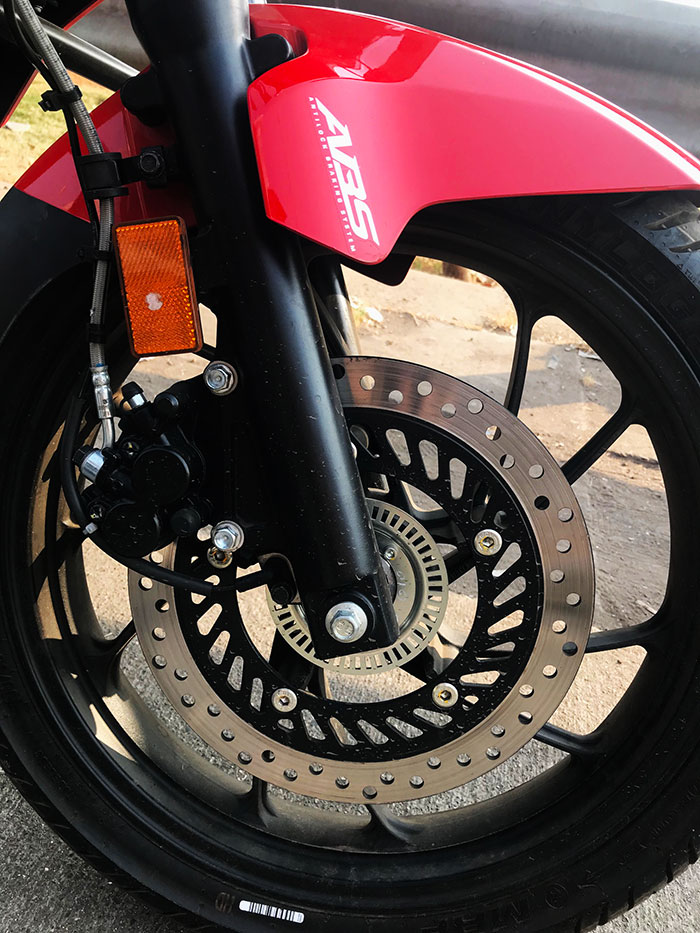 The pillion seat is small but comfy. The grab rails work well for the pillion. Mono-shock works fine giving more comfort to the pillion and even in the potholes it gives back very less jerks. Front has 37mm telescopic forks and they are bang on to give a very smooth ride with required traction to keep the bike stuck to the ground. Both the suspensions are smooth, tackles any kind of potholes, breakers with ease.

The brakes on the wheels are very responsive as well. Single channel ABS is on demand, work very neat. It gave more confidence to brake hard while going fast. We did try to lock the front but the ABS did it magic, kept the tyres stuck neatly with no skids. The rear brakes locked though but only u der hard breaking. Under normal riding conditions the rear brake also worked perfect. (Would have loved a dual-channel option over it)

At ₹ 89,900 (ex-showroom) this is by far the most affordable 200 cc. It may not be good looking, not technologically advance, nor even outstanding features but it still makes the cut as a good city commute bike.