The Alcazar is another master stroke from Hyundai and is excellent value for money - ticks all boxes due to its features, space and performance. It is the best value SUV right now below the Rs 25 lakh price bracket 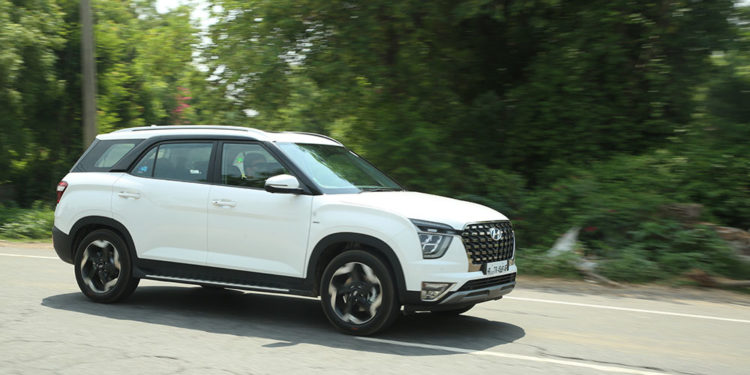 Hyundai has been at the top of the sales charts as far as SUVs has been concerned with its blockbuster hit, the Creta. The new generation model has been the highest selling SUV in India. With that much success under its belt, Hyundai is now looking at expanding its SUV range hence the next step was to bring an extended version based on the Creta. 3-row SUVs have been a new trend with the concept of family travel on the rise along with the need for a chauffeur driven type SUV.

We have seen the MG Hector Plus and the new Tata Safari which all aim to please the car buyer who wants MPV space but with SUV presence. Hyundai now wants a piece of that action with its Alcazar. We drove both the diesel and the petrol in its automatic form to find out if this new SUV has what it takes to be the 3-row SUV king. Read on.

The Alcazar on paper might look like an extended Creta but the car-maker has tried to make it look different with many crucial changes given to both the front and the rear. The Alcazar is also physically bigger and looks long with its length of 4500mm. While the basic Creta references are there with the headlamps or the front-end to some extent, a closer look reveals many differences. The grille at the front is bigger with a cascading grille which has a dark chrome effect. Then the bumper is also new.

The bigger grille lends the Alcazar more presence from the front too. Move to the side and the length hits you while you also see the new 18-inch diamond cut alloys which are bigger than the Creta’s. Hyundai has added in the traditional SUV elements with the cladding and the roof-rails too while the quarter glass is now bigger due to the presence of the third row.

Inside, the Alcazar makes an even better claim to be one of the most luxurious cabins below Rs 25 lakh. It looks and feels different from a Creta and like its rivals has a lighter dual-tone colour theme. There is also black surfaces and leather on the steering wheel with premium materials while chrome is also used. The quality and fit plus finish is very good-in-fact it is class best is what we can say.

Elsewhere, Hyundai has gone big with the technology with two displays each being 10.25-inch in size. There is a brand new digital cluster for one and it is all new with three views according to the drive mode. The car is equipped with blind view monitor which shows the blind spot on the side where you use the indicator – it is a very useful feature while driving. What is also useful is the touch screen in terms of its split views and the touch response. The features list is huge too and beats others easily here. The new 360 degree camera has a superb display and has configurable views too which along with the front/rear parking sensors make parking this long car easy.

The other technology bit comes with the voice commands and the Bluelink connected car features plus there are OTA map updates too. The Bluelink gets 60 features including having access to a smart phone watch app, remote starting (MT also and AT) and pre cooling the car plus more. You can also operate functions like opening the sunroof with voice commands.

That said it does not end here as the Alcazar is made for space and comfort too with a good chance of its owners being driven. Hence as seen here the 6-seater variant with the captain seats make for the best choice. There is huge space and legroom plus headroom is very good due to roof-line being different from the Creta. The seats recline and move too while there is enough on offer for passengers to relax with even having seat cushions! There are tables which fold out along with cup holders. A rear window sunshade and wireless charging facility for second row passengers are further welcome.

The 2nd row seats have a one touch tip and tumble seat mechanism along with 60:40 ratio split. The 3rd row is not the best but space is decent while headroom is not bad too. The boot space is 180 liters with all rows up.

The Alcazar gets two engines with the petrol being a 2.0l unit with 159hp and 191Nm on offer. The diesel is a 1.5l one with 115hp and 250Nm. Both get a choice of either a 6-speed manual or a 6-speed torque converter automatic. We drove the petrol and diesel auto.

The petrol first and it is incredibly refined plus a smooth motor. At start it matches up well with the Alcazar with the gearbox also being a good choice over a DCT. A torque converter makes more sense as a no nonsense practical gearbox. The engine has power too and the Alcazar will happily move at triple digit speeds all day. In the city the responses are also good with a light steering and instant throttle response. The Alcazar feels easy to get around and lighter than rivals too. For those who need a city based SUV with occasional trips will like the smooth petrol with the automatic. That said do not expect more than 7 or 8kmpl or 9 at best. The Alcazar gets drive modes with even the eco mode being decent in terms of throttle response while that will increase the mileage.

The diesel is the one if you drive long distances a lot and need the efficiency. It is the same 1.5l unit as the Creta with some tuning. You do not feel the lack of power at all and it is pretty easy to drive with the good amount of torque plus the automatic gearbox removing lag. We found the diesel to not being stressed at all. It is slightly noisy when pushed though.

The Alcazar rides better than the Creta while the 200mm ground clearance is more than enough for clearing the worst of our roads along with some small off-roading. It does get traction modes too but do keep in mind that it does not have AWD.

The Alcazar is another master stroke from Hyundai and will sell in strong numbers no doubt. It is excellent value for money and ticks all boxes due to the features or the space on offer or even the performance. It is actually the best value SUV right now below the Rs 25 lakh price bracket along with being a superb choice in terms of a value for money premium SUV.