Along with the F-type were the Jaguar XE, XF, XJ and the F-Pace. Check Nikhil's take on Jaguar Art of Performance 2019-20 that happened in Bangalore. 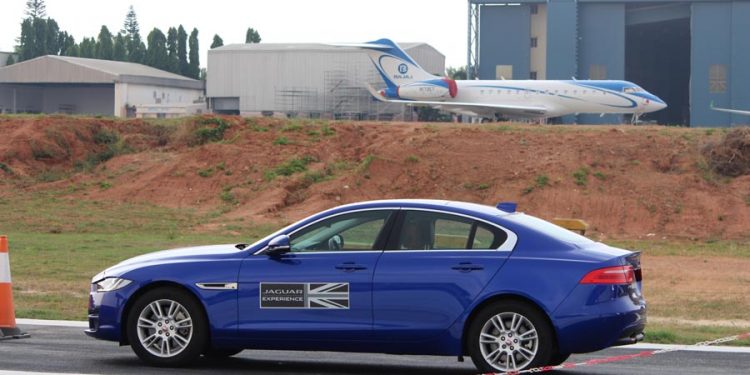 Every time we drive Jaguar cars at The Art of Performance Tour, we return with a smile on our face. It was my turn this time around and the smile was there to stay.

Jaguar organizes The Art of Performance Tour to let customers and Auto Journalists experience their full line of cars in a set of drills. The surprise element and the best of the lot here was the Jaguar F-Type SVR.

But the F-Type SVR was there for us to exploit its brute power on an airstrip from its 5.0 Litre V8 engine generating 575 PS which sounds so sweet the music feels like magic.

Enter the F-Type and you immediately notice how different and rich in tech the car is. Like other sports cars, the driver is seated low, almost as if he/she were touching the ground. But all that mattered for the day was to floor the pedal and go fast, really fast.

The SVR took off like there’s no coming back and the next thing I know, the car’s clocking 180+ kmph at Taneja Aerospace’s airstrip. The immediate power leaves you questioning if its real, and by the time I realized, I was at the end of my first run.

The 575 PS Jag was rather easy to drive for a first timer and I will be certainly be happy to do it again. I’m being honest that the F-Type did not scare me in a straight line, but I’m sure to change that statement when we drive it on our streets. A test for all the equipment, then.

On the other front, both the XE and the XF have a similar engine, they sport the same double wishbone front suspension and integral rear link suspension, plus intelligent Torque Vectoring.

Differences in dimensions make the XF 280mm longer, 40mm taller in comparison to the XE and they were sure to make a difference when we drove them one after the other. The XE felt more stable and compact to drive around as compared to the XF, and by the look of it, XF seemed to be equipped with a mix of power and a bit more luxury than the XE.

The longest of them all, the XJ invited us with a real feel of Jaguar luxury on the inside, and assertive styling on the outside. The XJ with a bigger engine of the three, was the slowest of them. Being a full size sedan, it wasn’t as agile as the XE and we’re not complaining.

The 2017 world car of the year, the Jaguar F-Pace was an interesting car to drive. Though we did not put the F-Pace to full fledged use, we were quite impressed with how minimal the body roll was. We would’ve loved to spend more time in understanding the F-Pace, but the small interval event did not allow us to do so.

The F-Type was the car of the day for us and I’m sure it was for a lot of people at the The Art of Performance Tour event. All the Jaguars showed good character and a healthy aura for city use. We will be able to understand them better when we get to review them on our streets.