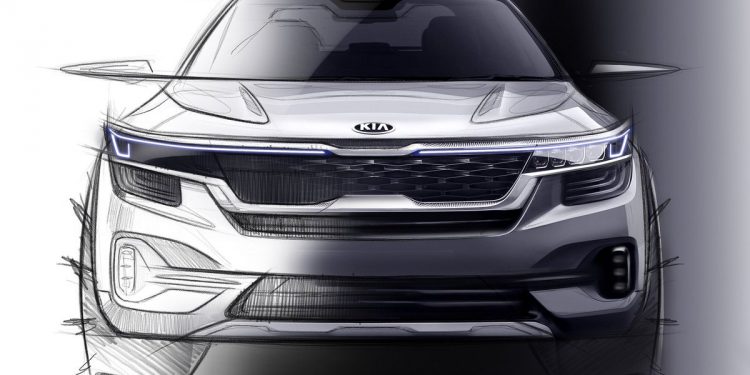 Hyundai Venue is the much awaited compact SUV anticipated this year (2019). The launch date and preliminary details of Hyundai Venue has already been revealed. The bookings for Hyundai Venue has already started – the company reported bookings in excess of 2600 on the day 1 of Venue booking announcement. While this is happening, the Indian arm of Kia Motors, which is a sister company of Hyundai is well preparing its strategy to bring in the “Design focussed” , “Magically Inspired” Kia cars to India.

KIA has officially announced that its first car is going to be a compact SUV code-named SP2i which is based on SP concept that was first showcased during Auto Expo 2018.

The leaked design sketches of Kia SP2i reveal both front and rear side of the SUV. The front design from the sketches reveals the cars headlamp extending inwards uptil the nose of front grille. You can spot the split-LED headlights by looking at the design sketches. The car’s front bonnet has symmetric design lines giving its face a very nice dimension.

Kia relates the above design sketches to be inspired by Tiger nose – that is one of the reason you see a Tiger in Kia’s TVC.

At the rear, although the tail lamps and other things look similar to Hyundai Creta , the design definitely differs and there is differently some “magical” touch on to it which makes it look unique.

The cars from Kia Motors India will be manufactured at Kia’s manufacturing plant located at Penukonda of Anantpur district in Andhra Pradesh. The Trial production of Kia cars have already started and the company has also revealed the camouflaged version of SP2i car during the Trial production ceremony.

The launch date of Kia SP2i SUV has not been officially confirmed yet and it is expected to happen in the middle of June 2019. Hyundai Venue has generated lot of traction among auto-enthusiasts and launch is scheduled on May 21. When Kia brings it compact SUV to market it shall undergo sibling rivalry with Hyundai Venue.

What is your take on Kia SP2i design sketches?

EXCLUSIVE: MG Hector in Silver Color revealed ahead of May 15 Launch