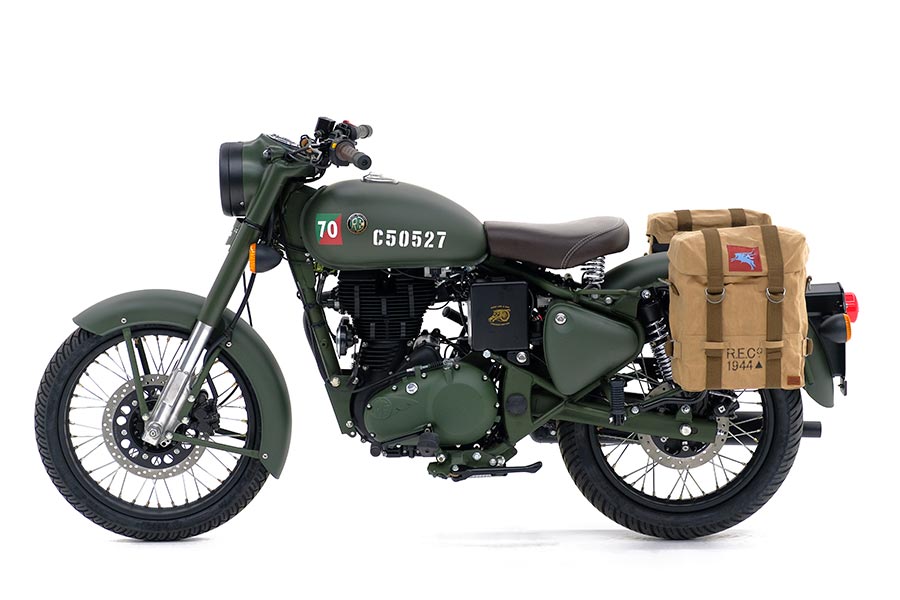 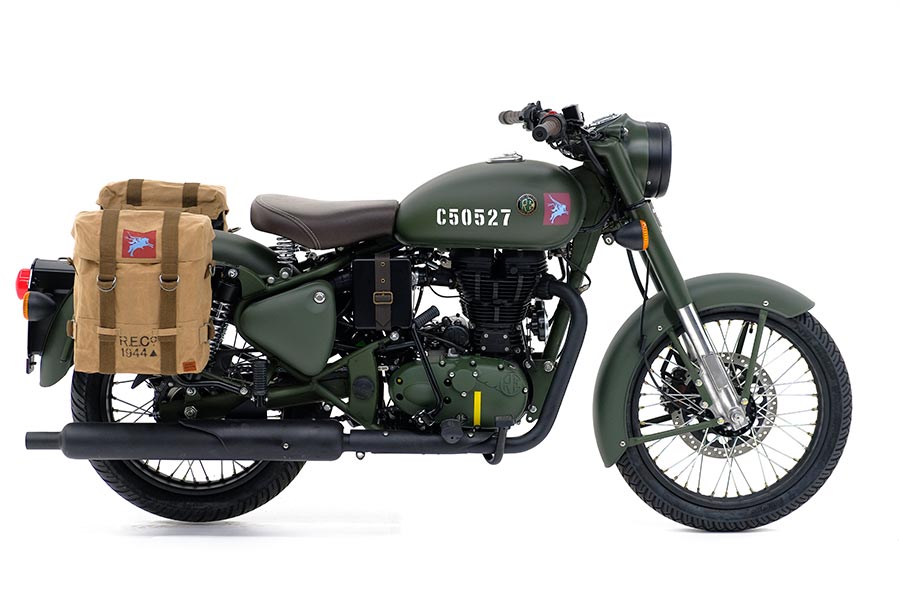 The oldest motorcycle brand in continuous production, Royal Enfield, launched the Classic 500 Pegasus limited edition motorcycle. The ‘Pegasus’ is inspired by the legendary RE/WD Flying Flea 125 motorcycle that was manufactured at Royal Enfield’s underground facility in Westwood, UK during the World War II. Conceived as a tribute the Flying Flea and Royal Enfield’s military heritage, the Classic 500 Pegasus is a chance to own a piece of motorcycle history with only 1000 units available globally, of which 190 will be available in UK. The motorcycle will be available to be booked online starting July, and will be priced at GBP 4999 (On the road). 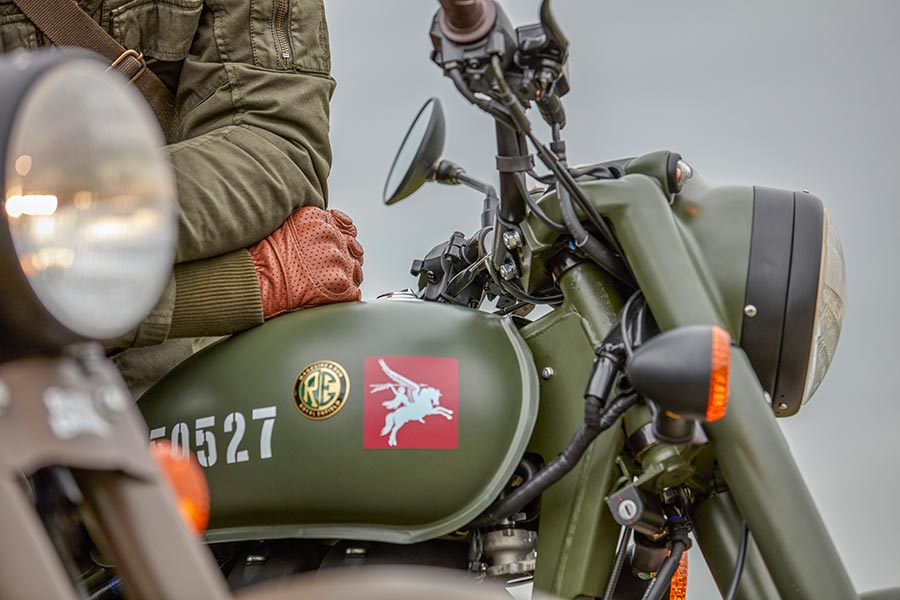 Royal Enfield has a proud and enduring history of military manufacturing, as the motto ‘Made Like a Gun Since 1901’ suggests. Royal Enfield produced munitions, artillery equipment and motorcycles during both World Wars and supplies the Indian armed forces with motorcycles to the present day. Royal Enfield was called upon during World War I to supply motorcycles to the British armed forces and also for the Imperial Russian Government, and continues to make simple, authentic, classic motorcycles till today. But by far its most storied wartime creation was the airborne troops’ ‘Flying Flea’, a compact and capable, two-stroke 125cc motorcycle that saw action in some of greatest battles of World War II, including D-Day and Arnhem. 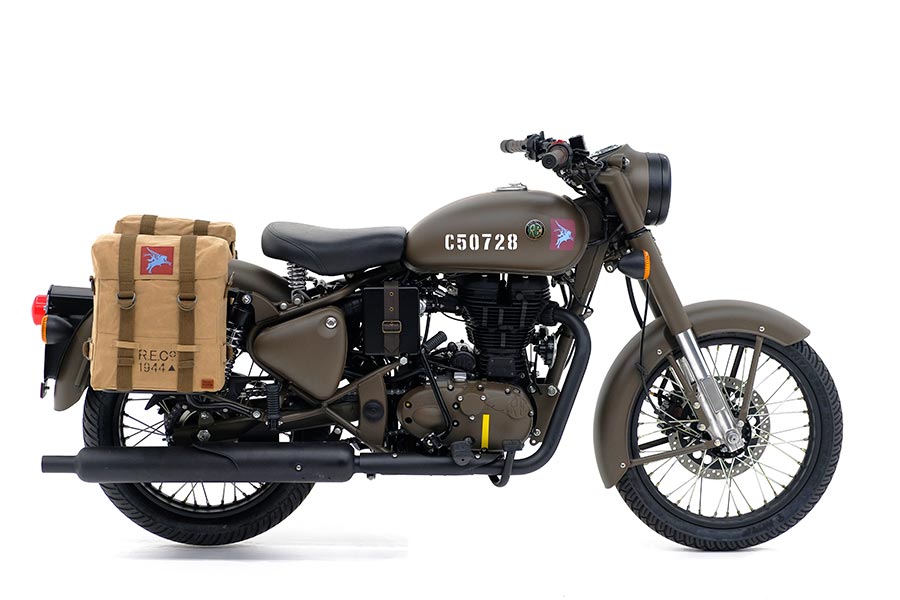 The story of the Flying Flea is both remarkable and inspiring, and it has a history like no other motorcycle. Rugged military motorcycles have been an integral part of Royal Enfield’s heritage and continues to be till date, as we endeavour to build classic, simple, enduring motorcycles. Our machines have played important role in both World Wars, earning a reputation for endurance in the toughest conditions. The Classic 500 Pegasus is a homage to the legendary war stories and to the resilience and pedigree of Royal Enfield

Known for their ruggedness, Royal Enfield motorcycles served with British troops in France and Belgium during World War I and were supplied to the Imperial Russian Army. In World War II, tens of thousands of Royal Enfield motorcycles were shipped to almost every theatre of conflict. But the Flying Flea was the only proper motorcycle to be dropped successfully behind enemy lines with paratroopers, with the War Department ordering more than 4,000. 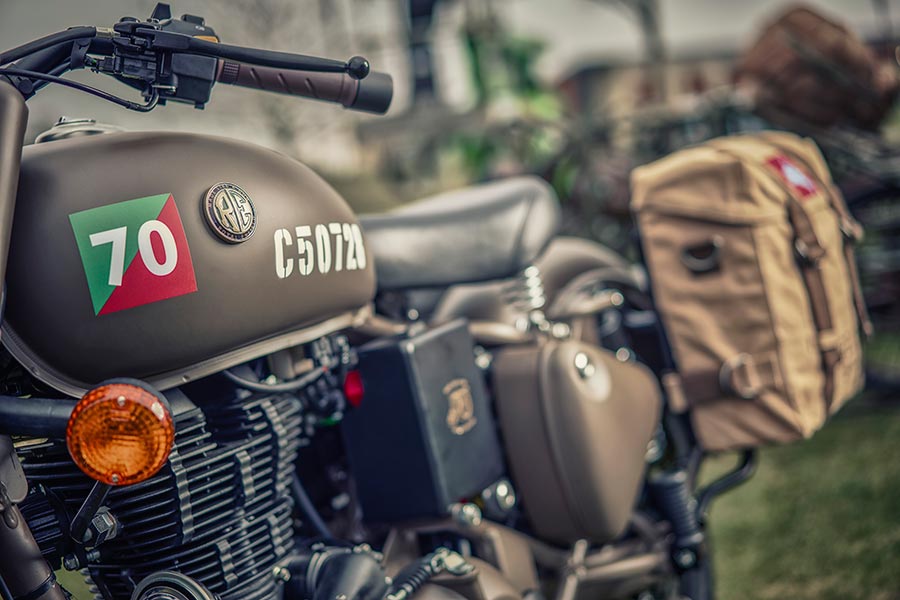 Simple, tough and resilient, the Flying Flea (or WD/RE to use its official title) was deployed extensively as a front line combat machine. An invaluable asset to the elite soldiers of the newly-formed Parachute Regiment, it was dropped by parachute in a protective steel cradle or carried in Horsa assault gliders. On the ground, it was used for reconnaissance, communications and carrying soldiers into battle.

The versatile little Royal Enfield proved itself in September 1944’s Operation Market Garden, the largest airborne operation in history. A daring Allied attempt to shorten the war by entering Germany from Holland over a series of captured bridges, it culminated in the Battle of Arnhem where besieged and outnumbered paratroopers held out against German tank divisions for seven days, in an incredible show of grit and determination. Beset with problems including broken radio sets, commanders relied on the Flying Flea to carry messages. Its strength and go-anywhere handling made the rugged and versatile Flying Flea almost unstoppable. Confronted with a fence or a ditch, the rider could simply dismount and lift the bike over. 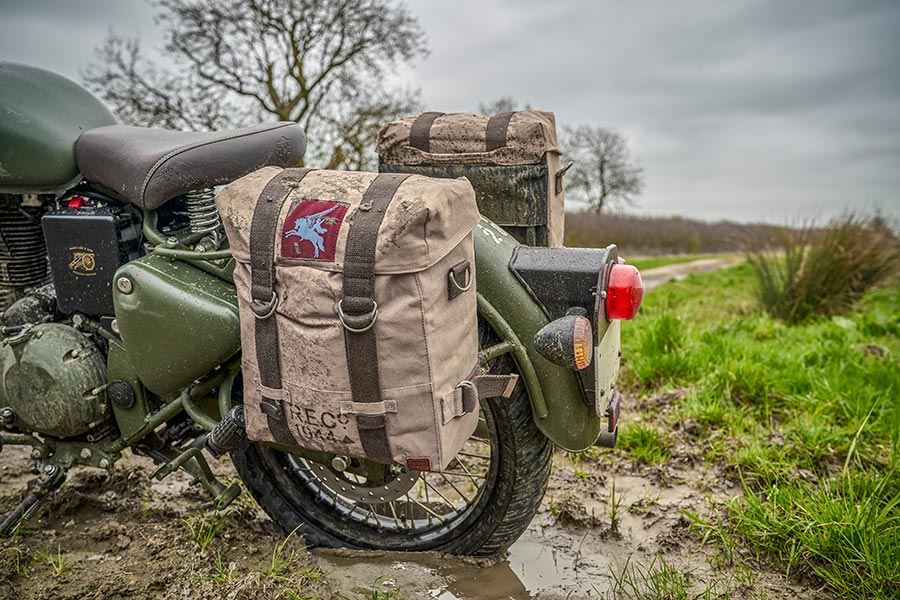 “Despatch riders went to headquarters at Oosterbeek Town Hall from the detachments,” remembers Arnhem veteran John Jeffries. “They used to be buzzing around from all over.” Motorcycle enthusiast John, who parachuted into Holland with the 4th Parachute Brigade, has fond memories of the Flying Flea. “I liked that motorcycle. They were a lovely size. I always judged a motorcycle by its weight and the Royal Enfield was just my type ”

The Flying Flea played a different but just as vital role on D-Day, the largest amphibious invasion in history. As the Allies fought to establish a beachhead in Normandy, Northern France, in preparation for the invasion of German-occupied Western Europe, hundreds of Flying Fleas and James ML motorcycles streamed from landing craft on to the beaches.

Speaking about the Flying Flea’s role during the D-Day operation, Gordon May, Royal Enfield historian, says,

The ramp would touch down and out would come the motorcycles. They were used as a means of rounding up troops and getting them forward and also accompanying troops much as a convoy escort rider would have done.

D-Day’s commanding officers later praised the lightweight motorcycles and their riders, known as ‘beachmasters’, for their part in the landings’ success. 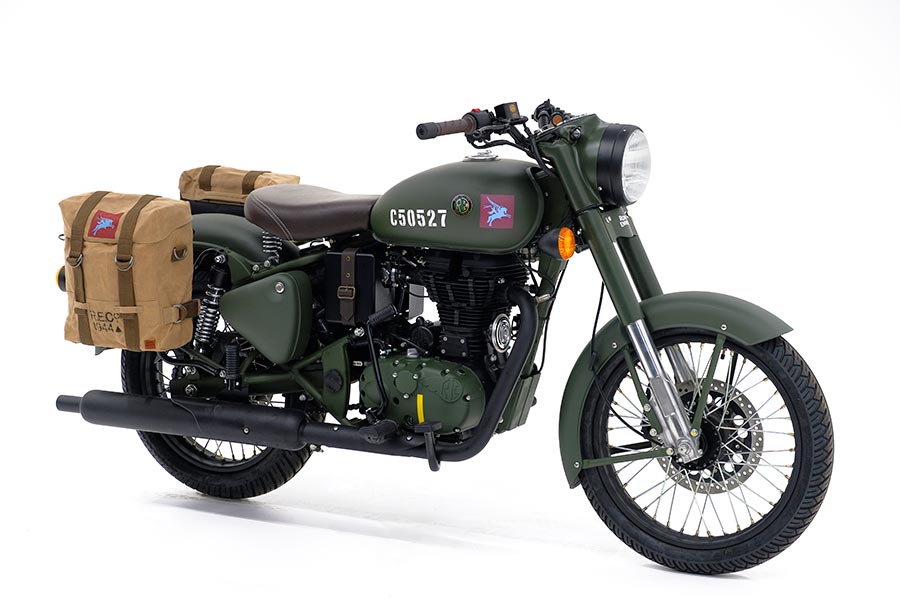 Conceived as a tribute the Flying Flea and Royal Enfield’s military heritage, the Classic 500 Pegasus is a chance to own a piece of motorcycle history. Just 1000 units will be made available: 190 on sale in UK and 810 for the rest of the world.

To celebrate the Flea and reveal its fascinating untold tale, Royal Enfield officially teamed up with the British Army’s Parachute Regiment. Mark Wells, Royal Enfield’s Head of Global Product Strategy and Industrial Design explains: “It was really important to work closely with the Ministry of Defence, so we approached the Parachute Regiment about 18 months ago and said we’d like work together on a project and the collaboration has been great. These new Classic 500 Pegasus motorcycles encapsulate a lot of the history and legacy of Royal Enfield. This is something only Royal Enfield could have done. Many brands have military motorcycles in their past but only Royal Enfield has the Flying Flea.” 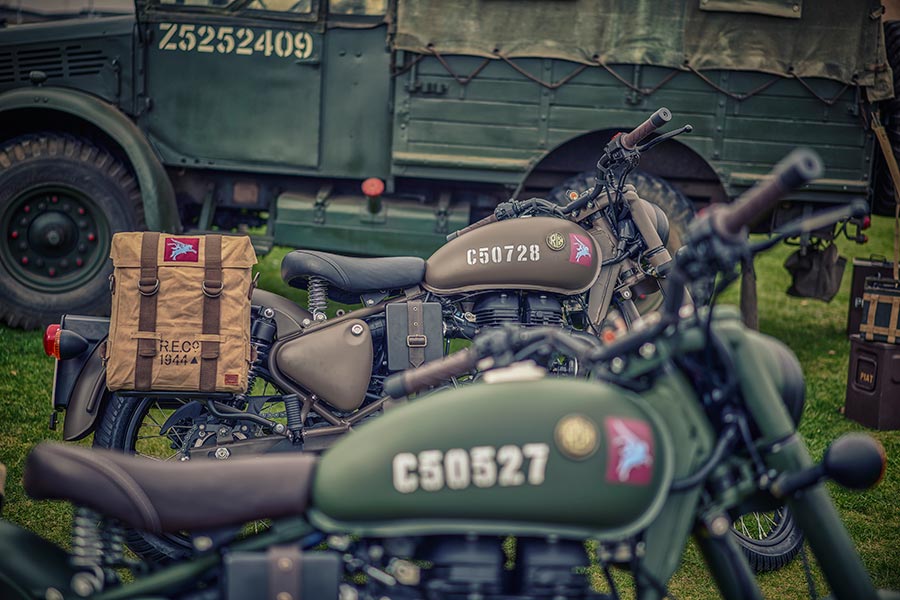 Each of the 1000 new Classic 500 Pegasus motorcycles wears a maroon and blue Pegasus emblem – the official Parachute Regiment insignia – on the fuel tank along with an individual stencilled serial number. The famous Royal Enfield ‘Made Like a Gun’ decal on the battery box is another reminder of the machine’s heritage. The Pegasus motorcycles’ markings are based on a genuine World War II Flying Flea used by the 250th (Airborne) Light Company, now in Royal Enfield’s official collection at the company’s UK Technology Centre. The new motorcycles will be painted in the wartime colours of Service Brown and Olive Drab Green, except in India, where only Service Brown will be available. 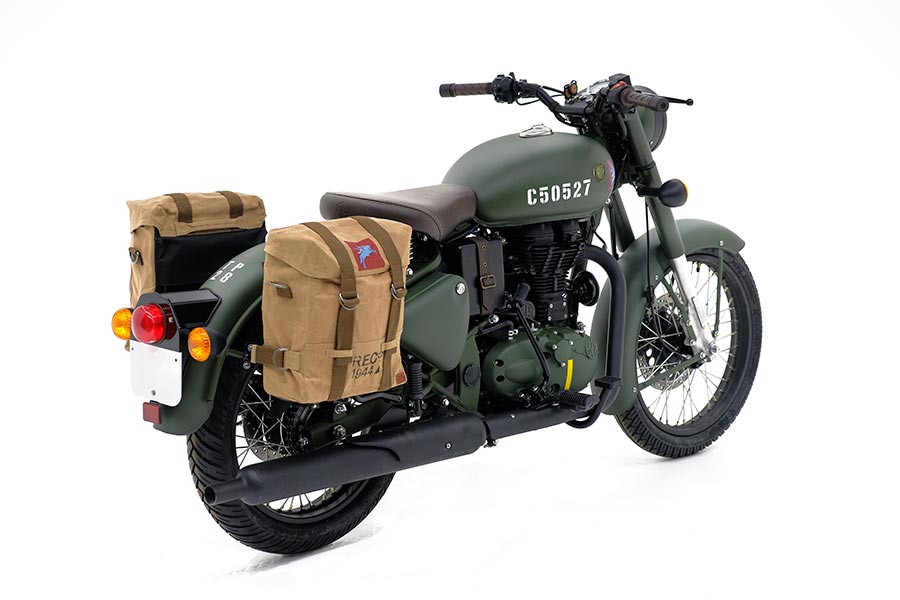 An array of Gear, inspired by this decorated motorcycling legacy, are also going to be available. Ranging from shirts, t-shirts, caps, lapel pins, bags and helmets, the limited-production apparels & accessories of this collection are also adorned by the official military insignia & the Pegasus emblem. 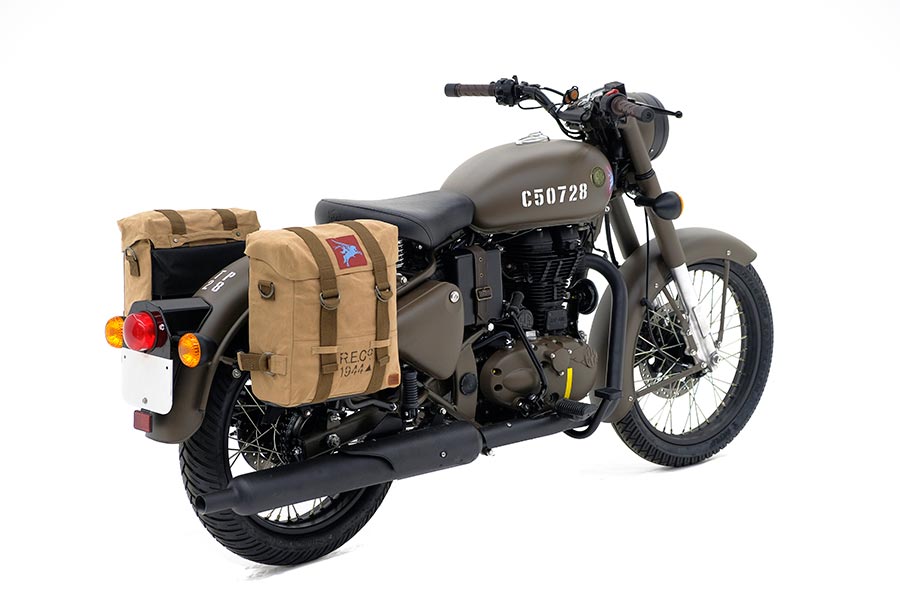 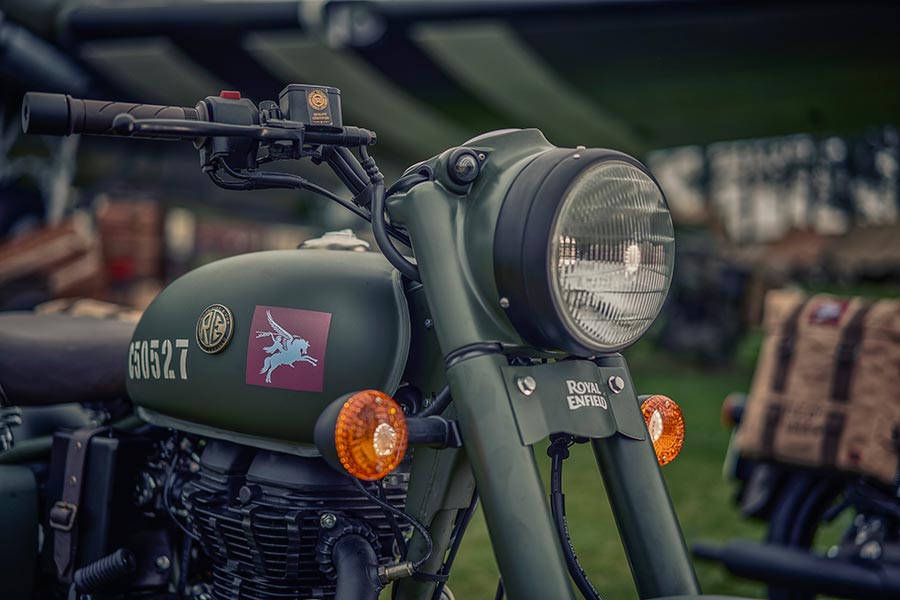 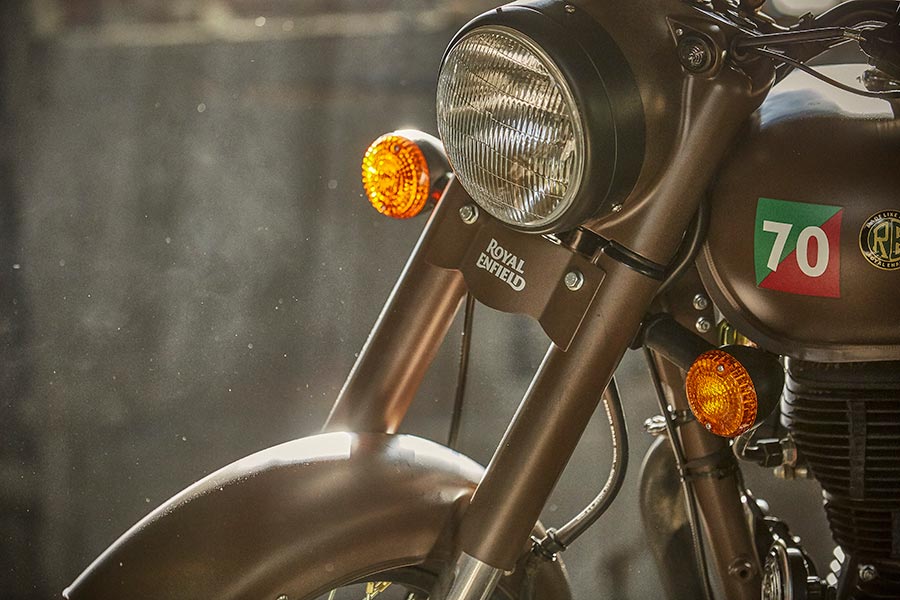 Each of these highly desirable limited edition motorcycle comes with a bespoke set of military-style canvas panniers bearing the Pegasus logo. Each motorcycle will have authentic markings of military motorcycles, including brown handlebar grips, a leather strap with brass buckles across the air filter, blacked out silencers, rims, kickstart, pedals and headlight bezel to complete the period look. In addition, consumers can also buy a range of Genuine Motorcycle Accessories that are compatible with the motorcycle.