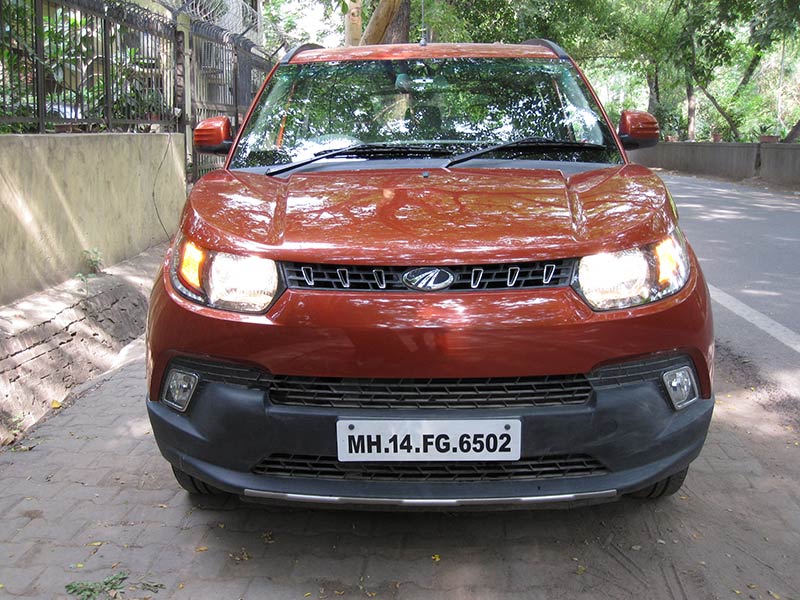 Every new Mahindra & Mahindra (M&M) motor product impresses me and it is in many ways a reflection of the country’s general rate of progress. However, to truly gauge such progress comparisons have to be made with the best in the business, which for small cars in general are the Japanese and now Korean manufacturers, with the Europeans gaining some lost ground as well. So how does the latest offering from Mahindra, the fully optioned and specced ‘KUV100 K8 mFalcon G80 6S‘ (KUV100) fare in an increasingly competitive world, please read further to find out.

The engine here reviewed is the 1.2 litre petrol mFalcon G80, a Multi Point Fuel Injection (MPFI) with ‘Dual Variable Valve Timing’ and develops roughly 61 kW or 82 bhp @5500 rpm and peak 115nm of torque at approximately 3600rpm, which are relatively good numbers for the class. From a standstill, the engine does require a few revs for a brisk start and on the go power delivery is more than adequate for city traffic if not exciting. It is fairly low key in operation at low revs but does thrum a bit a higher revs though not to annoying or disturbing levels. 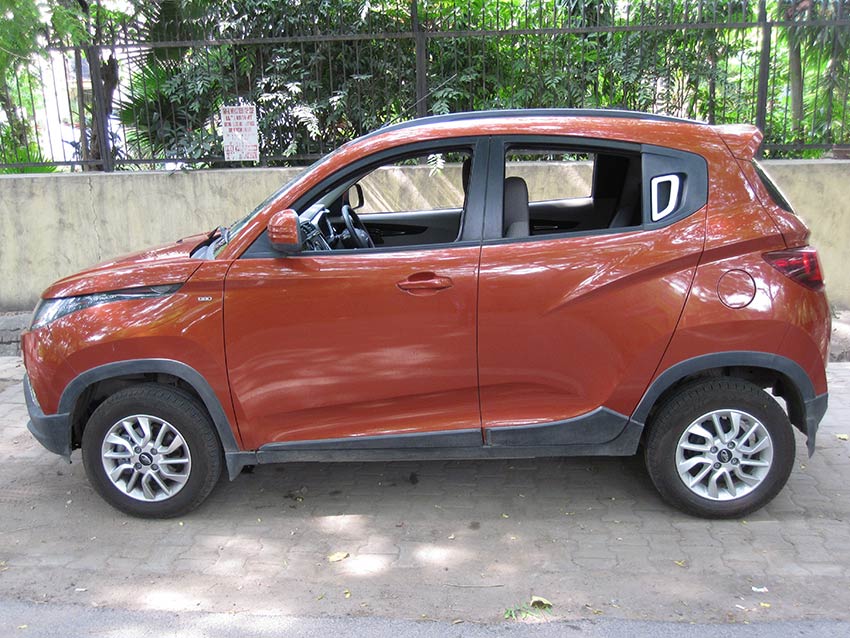 The clutch pedal is light and positive in action and mated to a very slick 5 speed gear box with effortless shifting. The gear lever is mounted on the lower half of the central part of the dashboard which is quite easy to reach and hold, but in use has a very plasticky sound when being slotted around, as if devoid of rubber damping. However the whole transmission set up is at par with the best.

The KUV100 in the ‘Fiery Orange‘ colour (check all KUV100 colors)  has polarising external looks and sheet metal design, but importantly it gets noticed and that may be half the battle when the general design theme of the class is vanilla. Mahindra KUV100 is a stated shade under 3.7 metres in length, it is here that may be M&M miscalculated as another 0.3 metres of stretch may have given the KUV100 better proportions and more rear luggage space than the 243 litres on offer, whilst still benefiting from any excise duty reliefs available. Whilst the KUV100 has a tall stature and feels high up inside with a good view of the road ahead, it still manages merely 170mm of ground clearance which is the general average of small cars and aesthetically suffers because of the dwarfed 14 inch wheel rims. This when added to the front wheel drive only package, takes away from any SUVish claims, which is quite a misinterpreted phrase in the Indian auto world. 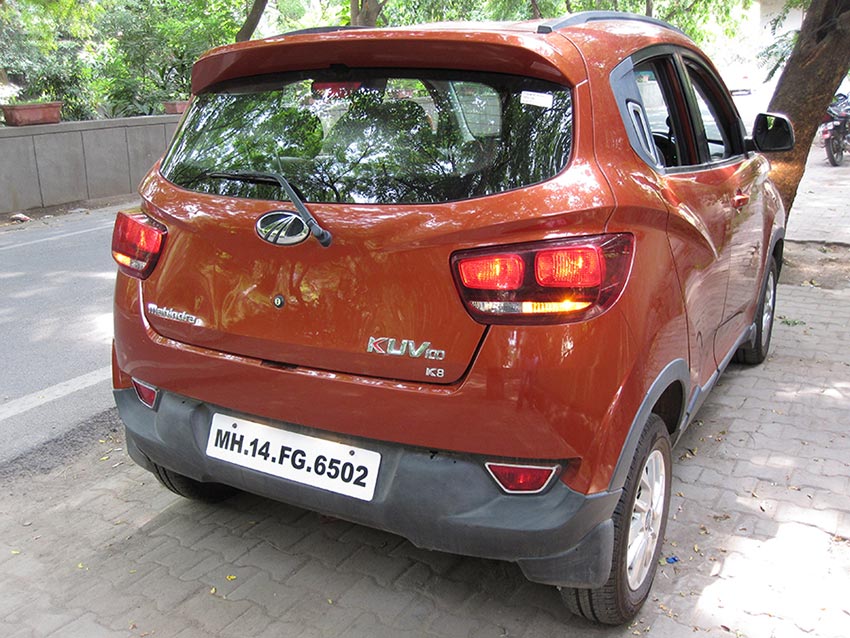 The external build of the KUV100 is very M&M i.e. solid and feels built to last, which is impressive for a small car. This led me to speculate the weight of the car and unable to get such data from official sources, unofficially it seems to weigh a bit over 1.5 tonnes, which is very heavy for a car of its class and possibly accounts for the relatively lower fuel returns as detailed below. However, slightly lower fuel returns for a more solid build, no arguments there.

The passenger cabin of the KUV100 is tasteful and well put together with no disturbing rattles, squeaks or sounds, which demonstrates good fit and finish, to go with the overall high build quality of the KUV100 in general. The dashboard is pleasant to look at, robust in built and operation with a ‘piano black’ element across it which seems to be the rage thesedays. While the interior plastics in general are hard to the touch and some of questionable durability (airconditioner on/off button), it is all par for the class. 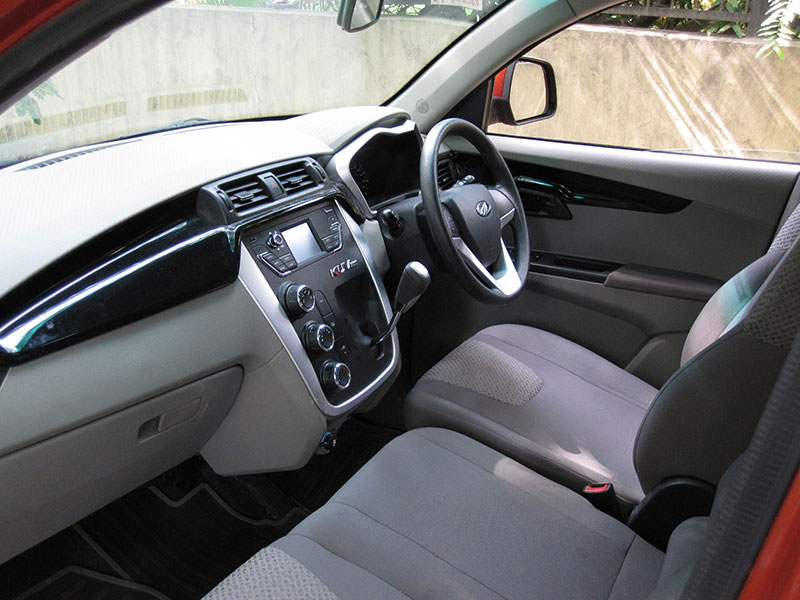 The seats of light coloured fabric are very comfortable and M&M’s claims of a 6-seater may not be far off, as the middle seat in front allows seating a small child quite comfortably, it is the protection to such middle passenger that may be debatable with no seatbelt across the chest area or neither an airbag option for frontal impacts. This front central seating can also conveniently fold down into a central armrest position with cubby holes for storage.

The rear headroom space however does feel a bit dark and uninviting due to the thick C-pillars that also affects all-round visibility and avoidance of traffic hazards, creating blind spots, not helped by the strange shaped ORVMs (side rear view mirrors). A special mention must also be made of the incredibly powerful airconditioner that comes fitted as standard with the KUV100 which got me to contemplate turning it off after a while or turning the blower vent direction away even when driving in hot and sweltering Delhi conditions. The entertainment system however feels a generation or two old though works and sounds well enough with the wheels mounted controls in this top end version. 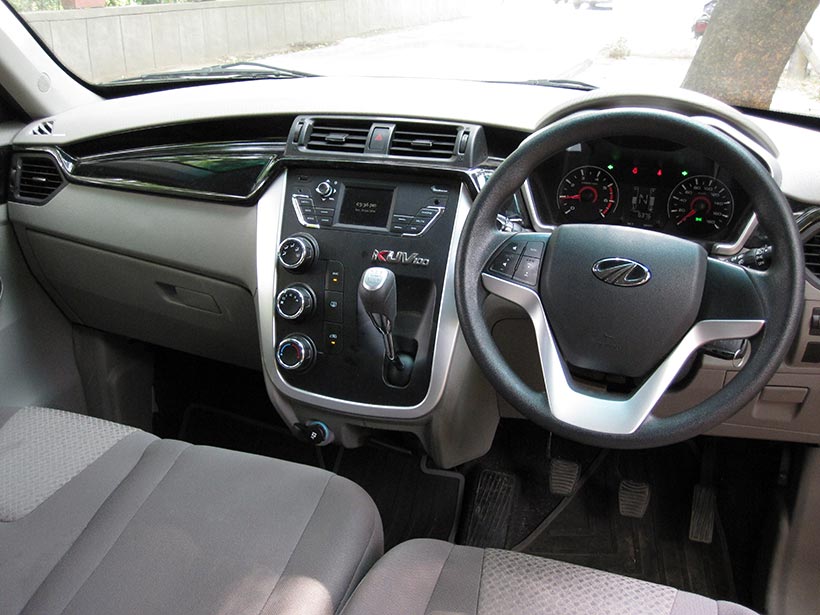 The KUV100 has been set up for a soft and cushonny ride which is at times a tad bouncy over uneven surfaces and over bumps. It is however composed and planted in a straight line and fairly so in turns and lateral change of directions as well at respectable speeds. The KUV100 comes with front wheel discs and rear wheel drum brakes which work well though the brake pedal itself may do with slightly better feel and more even travel. The parking brake of the KUV100 is mounted old-school style into and under the dashboard which is good to use as a bit quirky. 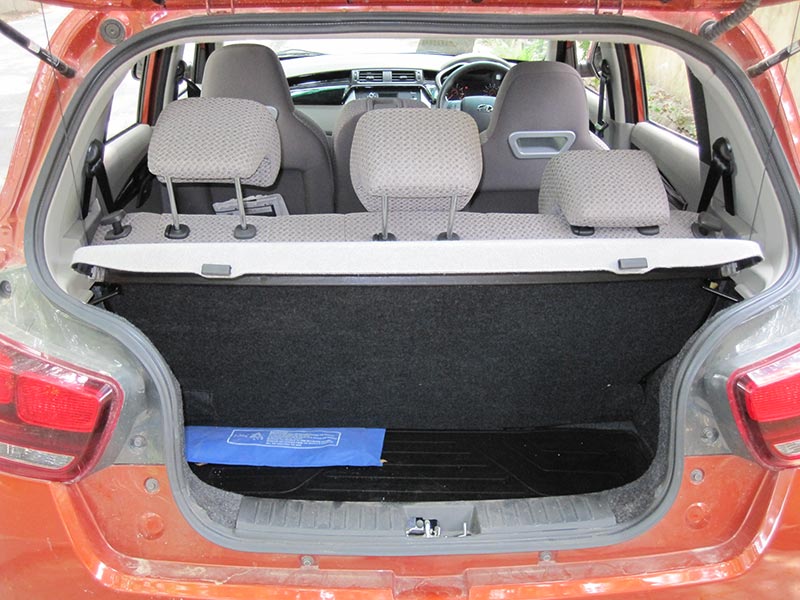 Further, this top-end fully optioned KUV100 comes with alloy wheels, plastic side cladding, remote central locking, with ABS, EBD and collapsable streering column (across the range), dual airbags (mostly across the range) and a host of other important safety features.

M&M claims a fuel return of a little over 18 km/l for the petrol version of the KUV100, my unusually spirited driving with the aircon on at all times over a mix of inner-city traffic and mild highway use averaged me around 12 kms/l. More noticeably, the KUV100 has a dissapointing fuel tank capacity of merely 35 litres, which with petrol has a significantly small driving range and may put off long distance travellers. For me, this figures are a huge handicap for the petrol version of the KUV100, which may be balanced by the relatively lower retail price and for city dwellers, especially in Delhi where the metro is much fancied, a case may still be made for the petrol version. 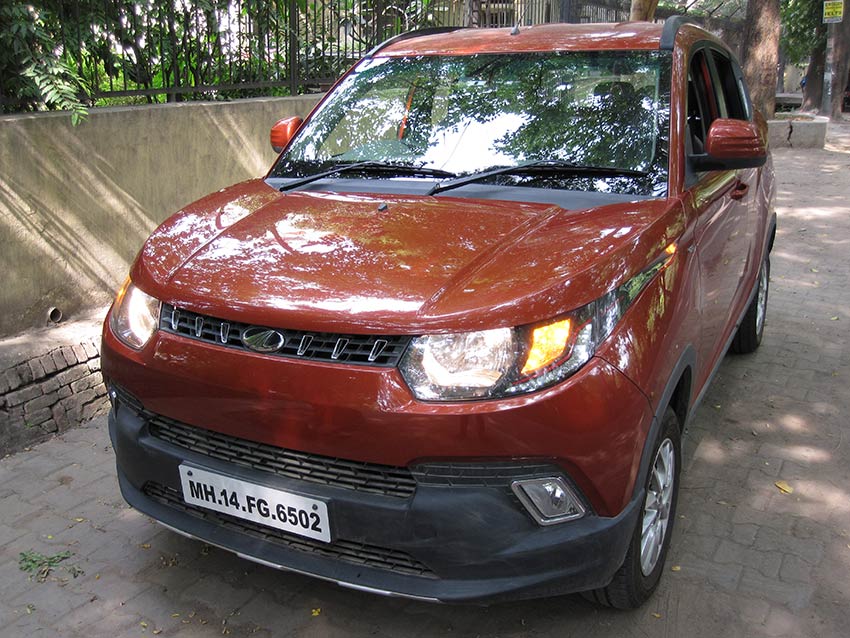 This top version also comes with ‘ESS’ or Electronic Start-Stop function that can be disengaged by the driver, which in neutral and foot on the brake and off the clutch, after a delay of a second or two completely cuts off the engine though keeping all electrical functions on, and restarts the engine by merely engaging the clutch pedal. I used the ESS function on just one short drive for trial purposes to check its effectiveness and operation, and found it to work well though it may need time and faith to get used to it and develop trust, as it failed me once in traffic and prompted me to use the ignition key to restart and not use the system thereafter. 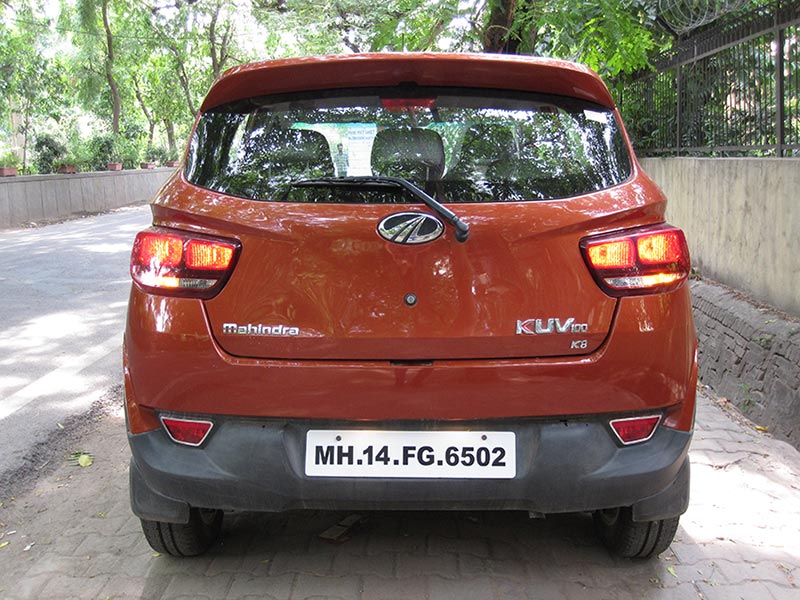 The KUV100 is another example of M&M’s growth and progress as an ‘Indian’ automobile manufacturer and also some boldness on their part to redefine the small car concept. The KUV100 is well engineered, solid in build and pleasant to drive and sit in. It however loses out on some much missed overall length, ground clearance, slightly larger wheels and possibly a rear-wheel drive with optional 4wd version. In petrol offering the KUV100 may also find it hard to justify relatively lesser fuel returns when compared with lighter though not as solid, competition and the small fuel tank capacity may shy away long distance commuters. It is however relatively well priced, with this top spec petrol K8 in 6-seater form retailing at approximately Rs.6.2 lacs (ex-showroom Delhi). It therefore understandable if consumers opt for the diesel engine despite the price premium and retain the iconic Indian brand in their driveway.