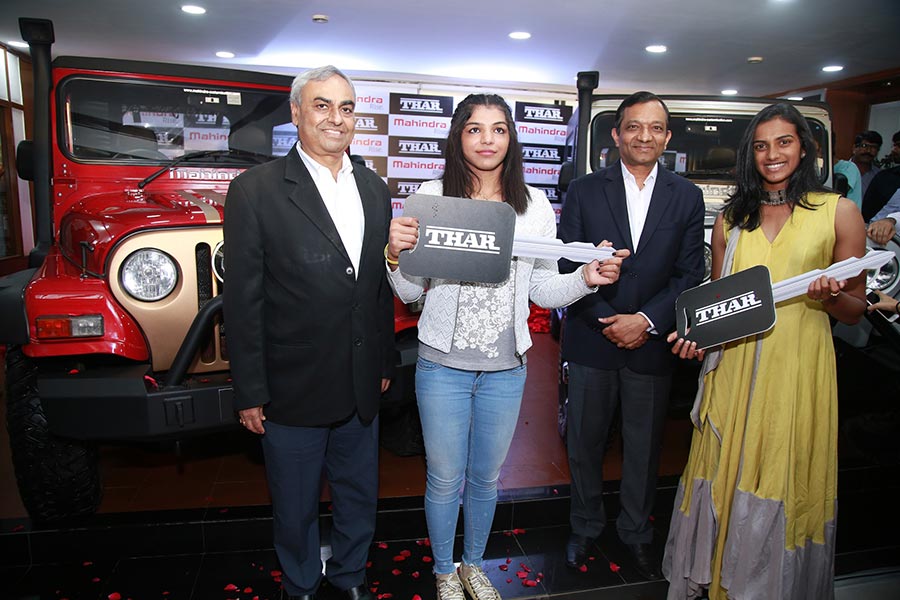 Dr. Pawan Goenka, Executive Director, M&M Ltd., handed over the keys of the Mahindra Thar to the two sportspersons at a felicitation ceremony held at the company’s manufacturing plant in Kandivali, Mumbai.

It is my pleasure to felicitate Sindhu and Sakshi with the Mahindra Thar as they put India on the global map with their historic victory. Built to take on anything from bad roads to bad weather, the legendary off-roader Thar is a perfect match to our Olympic stars and aptly complement their ability to boldly take on competition. Today, they have become role models for the youth in India who wants to excel not just in sports but in any arena. Fighting all odds to come out on top, they symbolize the go anywhere spirit of the Thar and hence it is an ideal vehicle for our Olympic stars to make a personalized statement.

The felicitation symbolizes the association of three strong entities, all representing the DNA of tough and rugged – P V Sindhu, Sakshi Malik and the Mahindra Thar. Both Sindhu and Sakshi have emerged as role models for the Indian youth for putting India on the Olympic world map. The ‘Mahindra Thar’ is an ideal vehicle for India’s Olympic champions, who, with their explosive performances at the recently concluded Rio Olympics captured the imagination of one and all.

Both Sindhu and Sakshi displayed extreme grit and excelled in their respective sports, exemplifying Mahindra’s RISE philosophy of ‘Accepting No Limits’. They are also ‘Driving Positive Change’ – another element of Mahindra’s RISE ethos by altering society’s perception of what a courageous, confident and determined woman can achieve. P V Sindhu became the first Indian woman to win an Olympic silver medal, while Sakshi earned the distinction of becoming the first Indian female wrestler to win a medal, bronze in her case.

According to the star shuttler P V Sindhu,

I am thankful to Mahindra for recognizing my efforts and encouraging me to excel in future matches. The Thar is an iconic off-roader and I am looking forward to owning and driving this stylish off-roader.

While receiving the keys to the vehicle, Sakshi Malik said,

I am very pleased to own the Thar and would especially like to thank Mr. Mahindra for this very special gesture and the #TharForSakshi Twitter Campaign, which received overwhelming support. With its rugged looks and power-packed performance, the Thar is indeed a great compliment to my personality.

Thar, the cult off-roader is targeted at both off-roading enthusiasts and people wishing to make a unique style statement. It plays a significant role in shaping the lifestyle vehicle segment both in urban and rural India and is an extension of the Mahindra legacy. Popular amongst generations of off-road enthusiasts, style seekers and even war-veterans, not many vehicles share the same legendary past and iconic status of the Mahindra Thar. It can triumph over any terrain and reflects the company’s legendary tough and rugged DNA like no other model.

Also read: This is how the next-gen Mahindra Thar looks like (Rendering)

Do share your views on this story by commenting below!