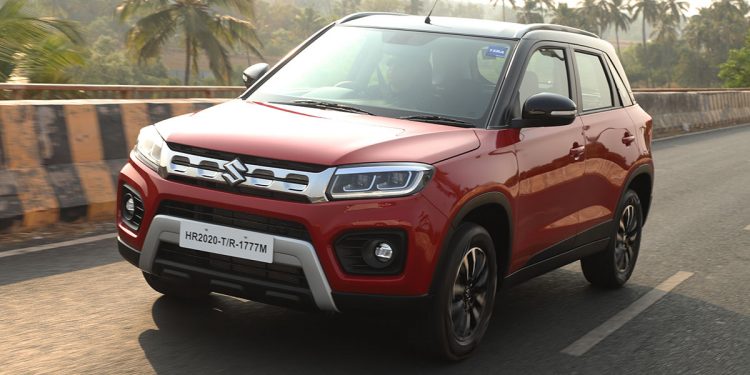 Maruti has sold more than 5 lakh Vitara Brezza cars since its launch years back. It was an instant hit where the distinct SUV styling, space along with the fuel efficient diesel engine charmed buyers. Of course the badge also helped but it was an honest SUV with a good list of talents. But there was also a cry for a petrol engine for a long time and needless to say, with new competition like the Hyundai Venue coming in, Maruti needed to tweak the recipe too!

Thus finally at the 2020 Auto Expo,  Maruti launched the Brezza petrol but along with that also pulled the plug on the diesel too. How will that affect sales and is the new petrol good enough? We drove the car in Goa to find out.

The Brezza was designed for Indian market in mind and the team did a great job. The design is like the XUV300 with a square plus a boxy stance. That worked well and even today the Brezza is not looking dated however the facelift has indeed made it better. The grille is much bigger now while the car wears a bigger smile plus you will also see projector headlamps with more prominent DRLs. There are LED foglamps too.

What adds to the muscle is the silver skid plate. Move to the side and you have new 16inch alloys which looks much better than the boring earlier one. The rear has less change but the LED tail-lamp set up looks good at night. Like earlier the Brezza, Maruti has kept the dual tone option while new colours, especially the deep blue, looks premium.

Compared to the Venue, the new Brezza has a simpler cabin and looks more boxy. There are no changes to the design but the steering gets leather while there is the new infotainment system. The colour changing dials are there while the automatic mild hybrid gets extra start stop system button.

The interior is more functional and lacks the premium feel plus feels a bit dated now. Also Maruti could have updated the features list and by that we mean 6 airbags or even wireless charging to rear AC vents. It has the basic features but at this price you want more.

Where the new Brezza scores though is the space factor. It has a wider rear bench which means more legroom plus headroom is there and the cabin feels airier.

So in place of the diesel Multijet you have the Maruti 1.5l petrol engine. It makes 105 bhp and 138Nm. We first drove the automatic and first impressions are positive. Unlike the diesel which was loud, the petrol is refined and is one of the most refined Maruti cars actually.

The 4-speed automatic at low speeds was doing quick progress with ease and response at slow traffic was very good. The automatic is a 4-speed but a torque converter meaning at low speeds, the shifts are very smooth.

However it is when you put your foot down and ask for more acceleration that the automatic gearbox becomes lazy. Being only 4-speed the gearbox takes time between shifts and also for downshifts. You can use the car in a fixed lower gear for mountain driving or instant performance via the gear lever.

Unlike the manual, the automatic gets the Maruti SHVS system with start/stop system also. The system works easily and you will get better economy as a result, speaking of which the automatic is more efficient at 18.76 kmpl while the manual is 17.03 kmpl.

The manual 5-speed is the more enjoyable one with the performance being better extracted. The gearbox has good shift quality and you will not feel the strain with the clutch or gearbox itself. There is a lot of performance as the automatic saps power. Thus if you like driving, get the manual while the ground clearance helps it go over potholes or bad roads well too.

The LXi is too basic and we say get the VXi instead as it has a good mix of features however the top-end ZXi Plus is a better option than the ZXi.

The Brezza starts from Rs 7.3 lakh to rs 11.4 lakh. The Venue from Hyundai starts at Rs 6.7 lakh and goes till Rs 11.5 lakh. The new Tata Nexon is Rs 7 lakh to Rs 11.2 lakh. The Brezza then is now more expensive than rivals and yet does not offer a diesel or features like rear ac vents or sunroof etc along with connected features. Thus the Brezza will have a tough time now with its space, efficiency and Maruti after sales as its main USP.

The Brezza loses its diesel and that its main selling point but the petrol is efficient and smooth with space being the major attraction while it looks good too. However competition is too stiff and unlikely the Brezza will sell in same numbers as it did but still the car has enough strong points.