by Anand Chaudhuri
in Cars, Mercedes-Benz
0 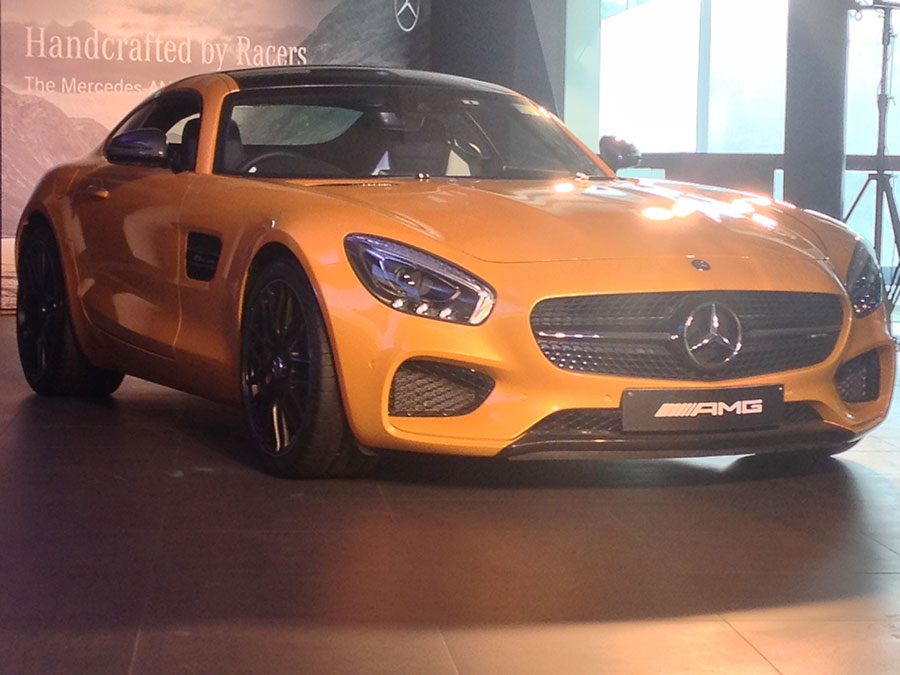 GaadiKey received an invite to the 24th November 2015 press launch of the Mercedes-Benz AMG GT S at T&T Motors and I represented the team, my first such event and a modest personal milestone. The event stated a bit later than the stated midday, with Mr.Roland Folger, MD & CEO, Mercedes-Benz India taking centre stage and providing an introduction to the company, its performance arm ‘AMG’ and the ‘star’ of the show, the AMG GT S, built completely in-house by AMG, Mercedes-Benz’ high performance division. AMG started off as a specialist and independent engineering firm providing high performance improvements to Mercedes-Benz cars, but was thereafter acquired by Mercedes-Benz and is now a wholly owned subsidiary of Daimler AG. To find more about AMG please click here  and check this page for information about Mercedes-Benz AMG’s F1 racing team. 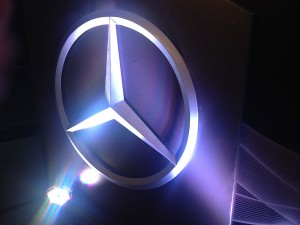 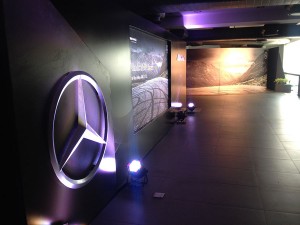 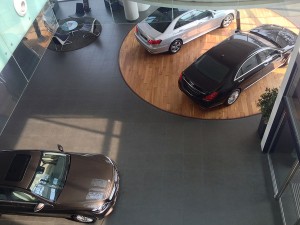 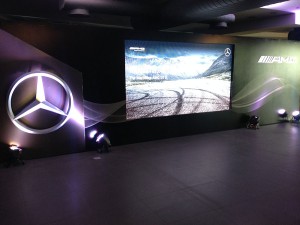 With a brief introduction to legendary DTM and ex-formula 1 driver Bernd Schneider, the audience was suddenly stunned by the thunderous roar of the GT S’ 4.0-litre V8 biturbo engine. Immediately thereafter a part of the stage opened up and the visually stunning AMG GT S in striking yellow paintwork with Bernd Schneider at the wheel drove through and up to Centre stage. 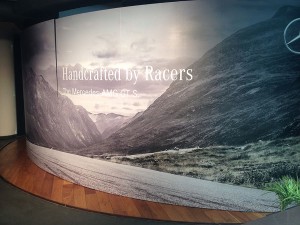 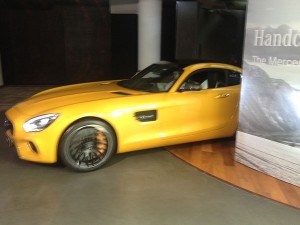 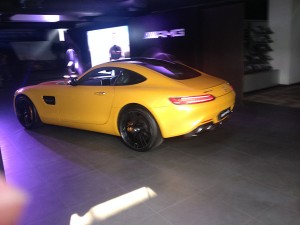 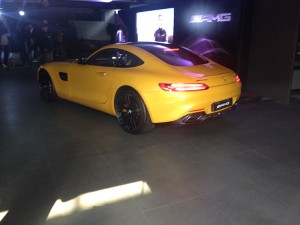 As a brief introduction, the AMG GT S is the higher power output (375 kW or 510 hp and maximum torque of 650 nm) version of the GT, which succeeded the SLS AMG, which drew its inspiration from the legendary 300SL, a classic which was ahead of its time at launch in 1954, still considered one of the prettiest cars of all time and even today commands stratospheric prices at auctions all over the world. An enduring image of the 300 SL has always been the ‘Gullwing’ doors which the SLS AMG featured but given up for conventionally opening doors by the AMG GT. The basic recipe for going fast is low drag (aero efficiency), high engine power and light weight (and excellent brakes to outlive the experience). 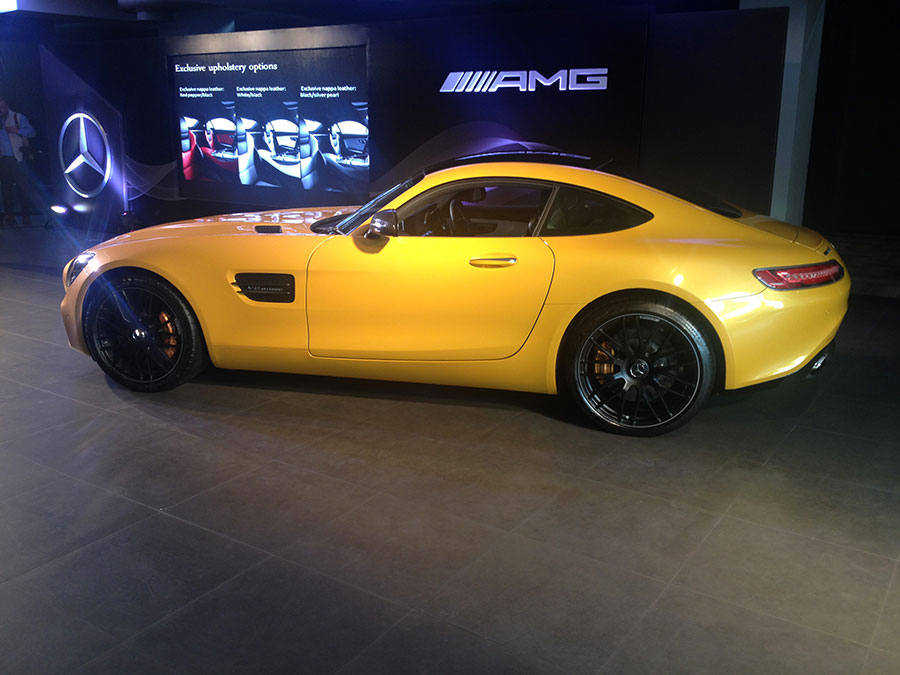 The above is where the new AMG GT S is stated to excel in. The stand out features of the GT S is its thunderous heart, the AMG 4.0-litre V8 biturbo engine with an output of 375 kW (510 hp) and maximum torque of 650 newton metres which equates to a 3.8 second dash to 100 km/h from zero and a max top speed over 300. 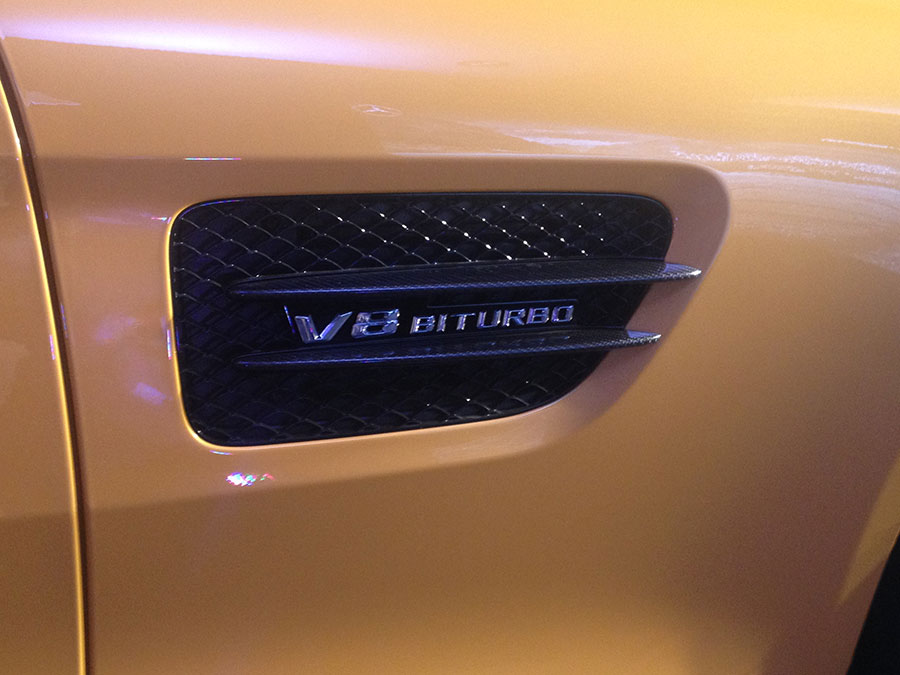 The GT S’ engine has a ‘hot inside V’ and dry sump lubrication, declared a world’s first in a sports car. Mercedes Benz explains these stand out features as follows; ‘the new AMG V8 engine has two turbochargers which are not mounted on the outside of the cylinder banks but rather inside the V configuration – which is known as a ‘hot inside V‘. Dry sump lubrication allows the engine to be installed lower, which moves the centre of gravity closer to the road and forms the basis for high lateral acceleration. The AMG GT S’ engine is thus the world’s first sports car engine with hot inside V and dry sump lubrication. With a dry weight of 209 kg the new AMG V8 is also the lightest engine in its competitive segment.‘ 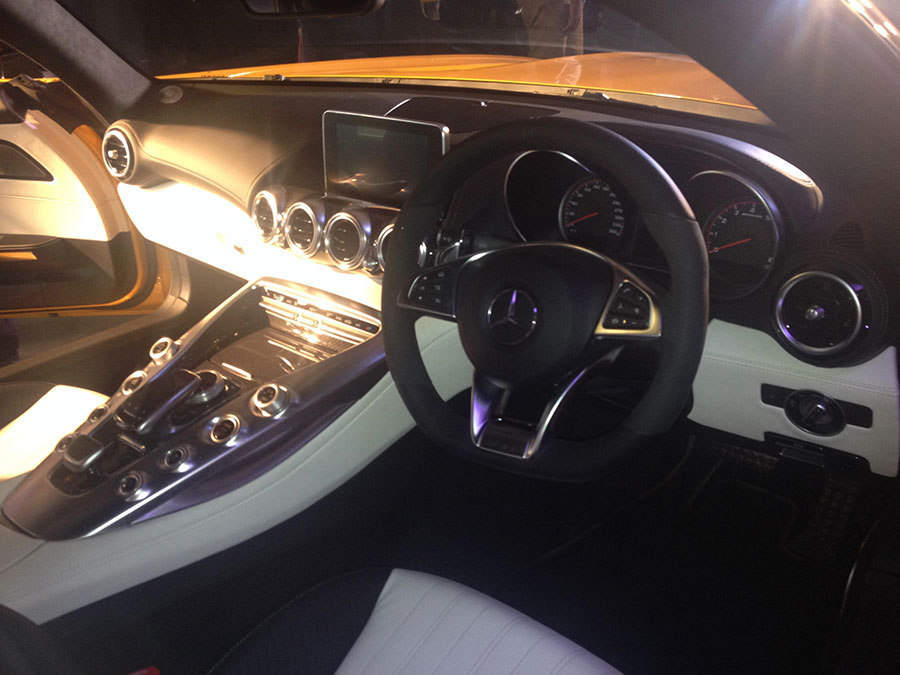 In relative old-school style, the GT S also has a front-engine rear wheel drive layout, though the engine is placed closer to the centre of the actual car for a better even weight distribution, as the relative long nose allows the engine to be so centrally placed aided by the short rear design. Another impressive fact is the incredibly lightweight chassis of a mere 231 kgs. The overall design of the AMG GT S is impressive and looks very elegant yet muscular and purposeful, and a clear improvement over the SLS AMG it replaced, though regretfully without the dramatic and awesome ‘Gullwing‘ doors effect of its predecessor. From a far the interior looks like an expensive custom suit featuring fine leather and stitching along with a polished metal ‘jewel’ effect for dials, instruments and switchgear to appeal to both the metal head racer and the connoisseur, fortunate enough to pick up the Rs.2.40 Crores bill. 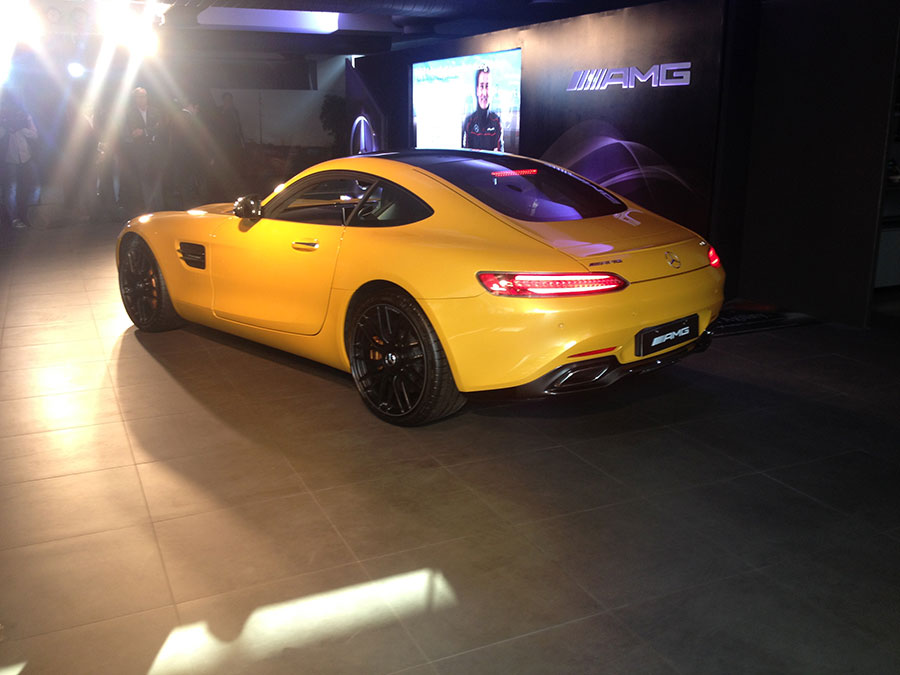 The above are just a tip of the impressive iceberg that is the AMG GT S’ features, for a more detailed list check this article.

Mr.Bernd Schneider is a German racing legend and with five championships and 43 victories, he is also the most successful DTM racer ever. With more wins at the 24 Hours of Dubai, the Bathurst 12 Hour, the 24 Hours Nürburgring and the Spa 24 Hours, Bernd is also a very successful and accomplished endurance racer and has a personal site http://www.berndschneider.com/ to know a bit more about his career as a professional car racer.

DTM stands for ‘Deutsche Tourenwagen Masters‘ or German Touring Car Masters, an uber competitive German car racing championship that has the ‘big 3’ (Mercedes-Benz, BMW and Audi) fighting for ultimate supremacy in their own European backyard. I grew up watching a lot of DTM on cable television back in the day and it was special to see the Bernd in person, assuming his first visit to India. To find out more about DTM racing please click http://www.dtm.com/en.

For me personally, it was an absolute pleasure to see him in person here in India for the launch of the AMG GT S as I grew up watching many DTM races on television which regularly featured his wins and domination of the uber competitive racing championship. Whist conversing with Mr.Roland Folger, Bernd did hint at something even more exclusive to look forward to from Mercedes-Benz in the near future to keep us wanting for more. It however disappointing to see the lack of appreciation for Mr.Bernd Schneider (who used ‘namaste‘ to address the audience), given his accomplishments and his presence in India, by India’s leading motoring journalists and press crew, possibly due to ignorance on account of the facts and figures that we store in perpetuity for a particular sport and its chosen few. Still I managed to get a good photograph of him with the AMG GT S by his side. 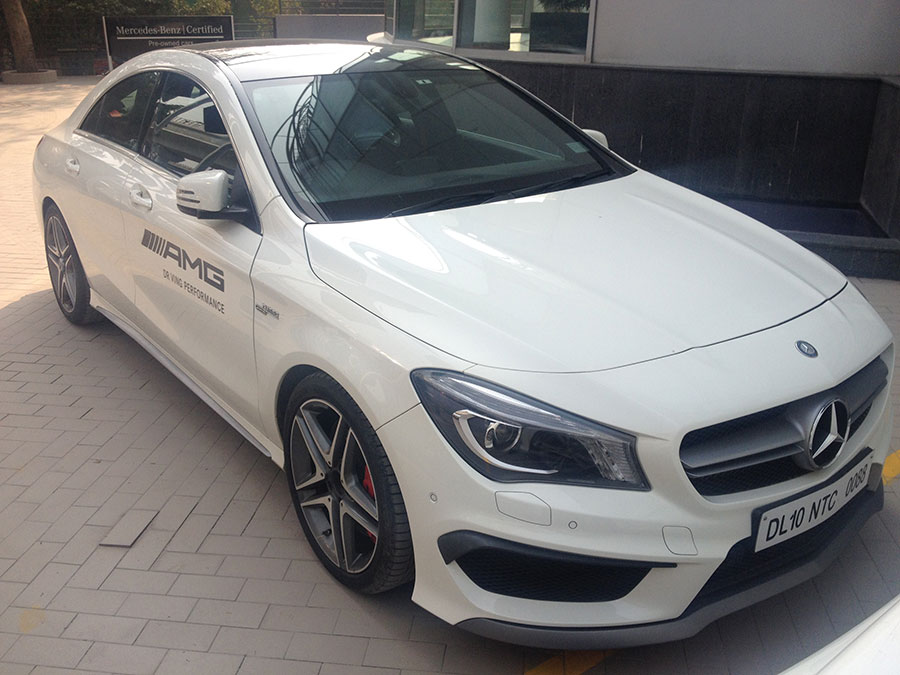 As I was leaving the event, a white CLA 45 AMG 4matic (all wheel drive/4WD in MB parlance) caught my eye in its AMG body kit and red brake callipers behind its large AMG wheels, a worthy addition to its elegant design. For a bit more information on the car, please click here and enjoy the photographs by us. 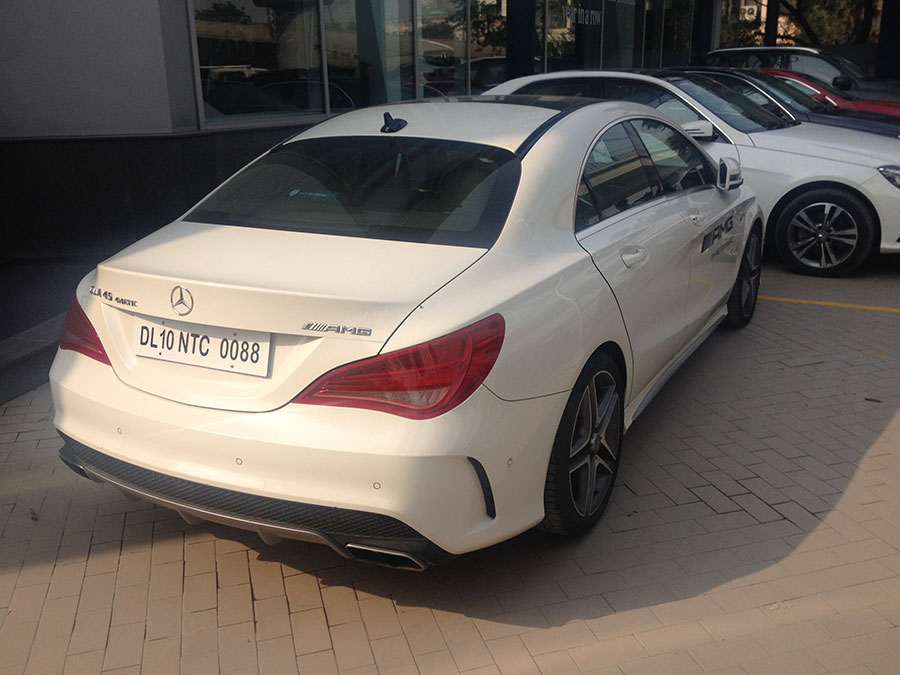 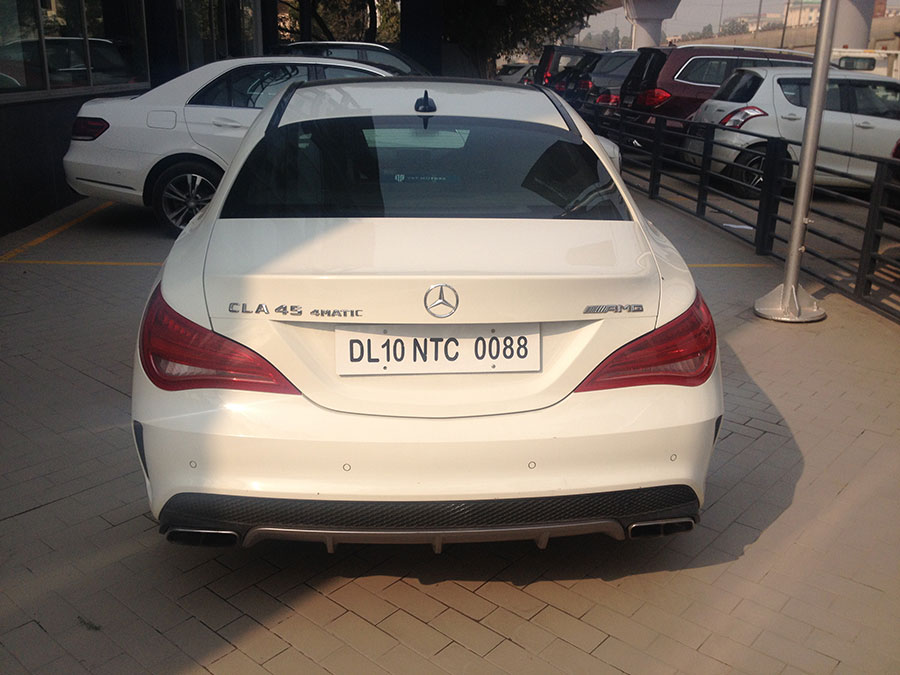