by Chethan Thimmappa
in Cars, Mercedes-Benz
1 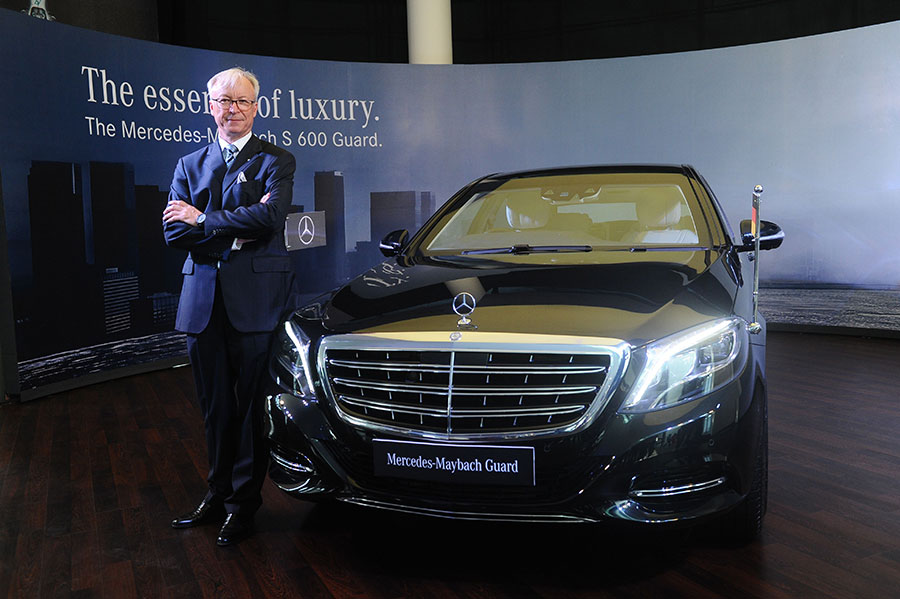 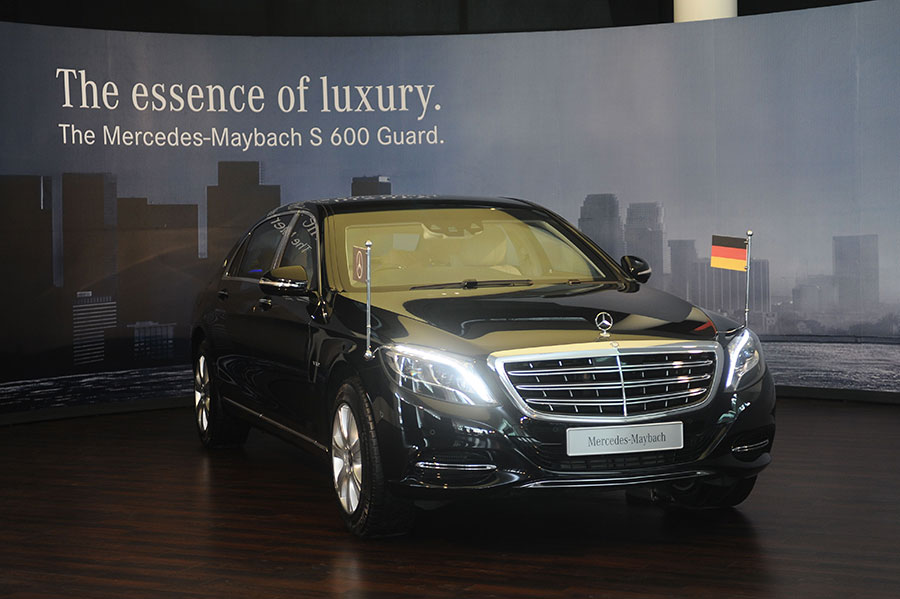 Mercedes-Benz’s remains the most trusted brand globally in manufacturing ‘Guard’ vehicles since 1928. It is hence not surprising that most of the global heads of states, top diplomats, business tycoons and celebrities prefer a ‘Guard’ vehicle. We are pleased to introduce the world’s first passenger vehicle certified with the highest ballistic protection level of VR10, in India. The Mercedes-Maybach S 600 Guard is launched in India within 15 days of its international debut. With the introduction of the Mercedes-Maybach Guard, we continue to follow our ‘top of pyramid’ approach for the discerning Indian customers.

The Mercedes-Maybach S 600 Guard delivers the highest levels of ballistic and blast protection, available for a non-military vehicle. Simultaneously, it offers unsurpassed levels of spaciousness, ride comfort and on-board luxury features. The rear seats have also been repositioned further back, adding to the sense of privacy.

Part of the protection concept is that, it takes a very keen eye to distinguish the armoured version of the Maybach from its series-produced counterpart. A series of special technical features also ensures that the Mercedes-Maybach S 600 Guard remains mobile during and also after an attack and is able to exit the danger zone.

The new Mercedes-Maybach S 600 Guard has been officially certified by the Ballistics Authority and for the first time, meets the very highly stringent requirements for VR10 protection rating. These guidelines specify that the bodywork and windows must be able to withstand hardened steel core bullets fired from an assault rifle. The vehicle also has an ERV 2010 rating (Explosive Resistant Vehicles). After the inspection by Germany’s Federal Office of Criminal Investigation, the vehicle was approved without any constraints.

 The Mercedes-Maybach S 600 Guard: The Essence of luxury meets the pinnacle of safety, security and performance

The robust Mercedes-Maybach S 600 Guard is an engineering marvel that defines sophisticated aesthetic styling, world-class safety and unmatched driving performance. This super luxury sedan is a hallmark of seamless design coupled with revolutionary safety and security features that is powered by a monstrous V12 petrol engine.

The Mercedes-Maybach S 600 Guard delivers a superior performance thanks to its powerful V12 petrol engine, which generates 390 kW (530 hp) power. Thanks to 830 Nm of torque and the 7G-TRONIC automatic transmission, the Mercedes-Maybach S 600 Guard combines lower fuel consumption with an impressive acceleration for a rapid escape from the danger zone when under threat. For weight reasons the top speed is electronically limited to 190 km/h.

The Mercedes-Maybach S 600 Guard embarks exceptional strength and stability due to
a specific reinforcement of the base structure which is integrated into the body-shell production stage. The luxury sedan maintains its state-of-the-art comfort and luxury features inside the cabin by sophisticated integration and intelligent overlapping of all protective elements.
At the body-shell stage of the vehicle, protective components of special steel are integrated into the cavities between the body structure and the outer skin. Systematic overlapping systems at critical points, such as material transitions and interstices provide comprehensive ballistic protection. The windows have been ergonomically designed with the usage of the best quality and durable materials that ensure passenger safety, even in extreme situations.
Despite the appealing outer laminated structure of the windows, they are precisely coated with polycarbonate on the inside for splinter protection.

The collaboration of all the safety equipment and technology inside, makes the Mercedes- Maybach S 600 Guard a safe cocoon for the occupants who not only witness ballistic protection, but also comprehensive protection against explosive devices. In the event of an explosive charge detonating at the side of the vehicle, the armouring protects the occupants as effectively as it does in an assault with explosives beneath the vehicle: the new underbody armouring, entirely covers the underbody under the occupant compartment, a unique feature in the civilian special-protection segment.

Intelligent assistance systems
The Mercedes-Maybach S 600 Guard is also equipped with the latest technical innovations that make it a shining example of passenger car development. As part of the Intelligent Drive, these optionally include assistance systems which considerably enhance comfort and safety.

In addition Mercedes-Benz offers further optional extras which were specifically developed for the Mercedes-Maybach S 600. These include:

As in the case of standard production models, the full manufacturer’s warranty also applies to the Mercedes-Maybach S 600 Guard and the other models in the Guard family. All the Mercedes-Benz service outlets worldwide are also able to service, maintain or carry out any necessary repairs for the Guard models. 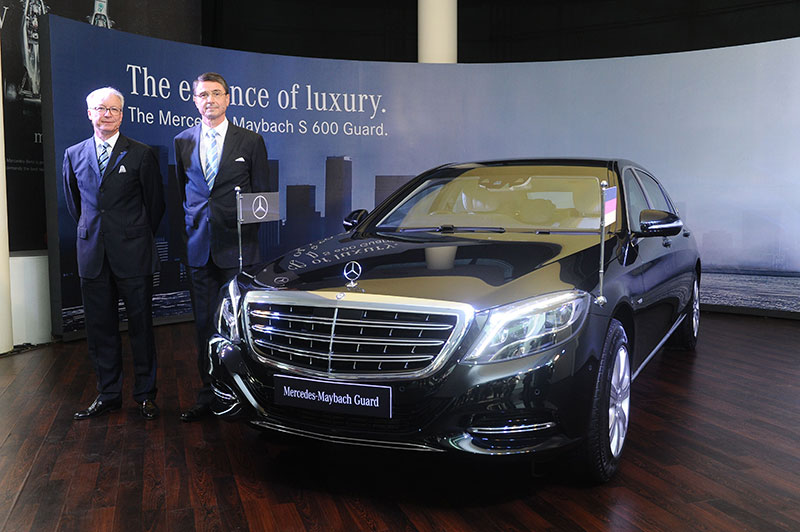 Brief history on ‘Guard’ vehicles by Mercedes-Benz
Globally, Mercedes-Benz has the distinct stature of having an iconic history of building special protection vehicles for emperors, head of states, politicians, VIPs etc. for over 85 years. In 1928, the Nürburg 460 model was introduced, when Daimler-Benz became the first company in the world to begin factory-fitting saloons with special protective features to shield the occupants from gunshots and explosives. This was when Emperor Hirohito of Japan personally selected an armoured “Grand Mercedes” as his official car. Today after several decades, Mercedes-Benz continues its endeavour of manufacturing the safest and most luxurious protection vehicles for distinguished patrons across the world.

Politicians and heads of state across the world entrusts their safety and security to Mercedes-Benz special-protection vehicles. From 1965 onwards Mercedes-Benz offered numerous models with special protection. In addition to the legendary Mercedes-Benz 600 Saloon and Pullman Saloon models, in the 1970s and 1980s the range included the 280 SEL 3.5 and V8 S-Class models, the 350 SE/SEL and 450 SE/SEL as well as the 380 SE/SEL to 560 SEL. Since 1979 Mercedes-Benz has also been building G-Class models with protective systems.