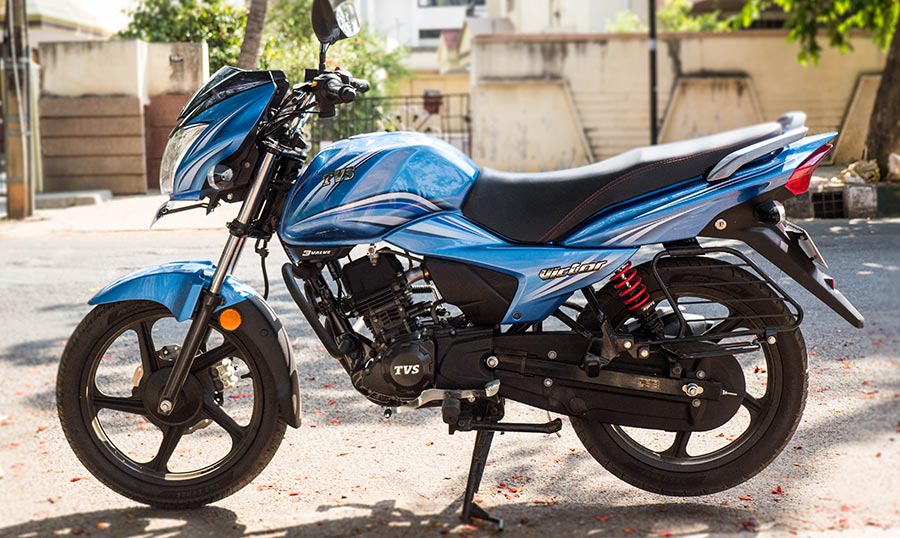 TVS Motor has introduced a new motorcycle in 110cc segment – the new TVS Victor. In India, bikes in 100 to 110cc sells really well because of growing consumer demand for commuter bikes that are cost effective. A very important requirement for someone in this category is the fuel efficiency / mileage delivered by the bike. 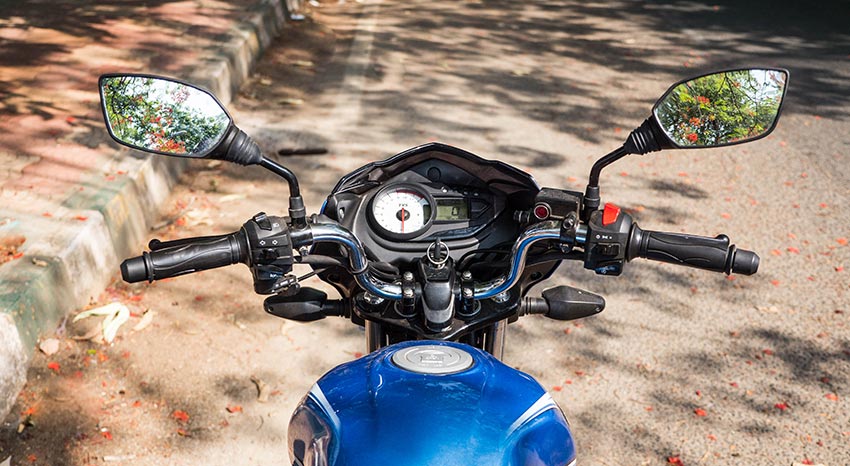 Having identified the importance of growing demand for cost-effective, fuel efficient commuter bikes in India, bike manufacturers have shown lot of activity in this segment in recent times. Livo from Honda, Saluto RX from Yamaha are some of the 110cc bikes which is trying to woo customers in this segment. TVS Motor has played really nice by introducing a 110cc bike and also calling this bike as “Victor” – This is not a new name – It is the name of the popular bike which the company introduced in the year 2001 and later discontinued in 2006. While the name “TVS Victor” brings in that familiarity to anyone, we decided to test ride this new rejuvenated bike and wanted to know this bike’s performance and real road experience. What follows is the review of new TVS Victor. 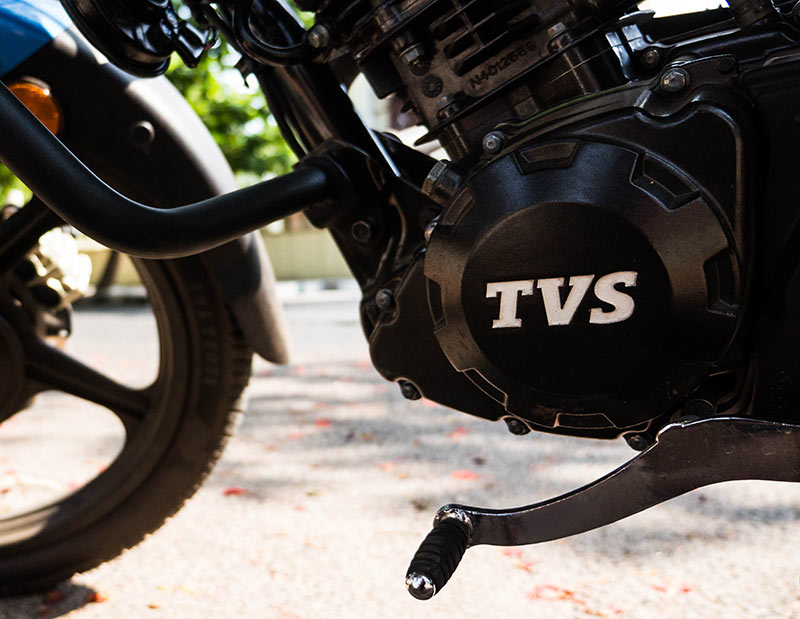 We received the all new TVS Victor for test ride in Bangalore. The color of the Victor offered to us was “Blissful Blue” (5 other colors available)  and this bike variant had the disk brakes in the front. The initial impressions were quite fair until the bike was brought to real test.

The all new TVS Victor gets an updated and refreshing look when compared to its old version. The new TVS Victor stays simple when it comes to design. The TVS Victor gets a digital speedometer, unlike Honda Livo. Other design features which we can mention here is stylish pilot headlamps that comes with hazard lights which can be used during fog or heavy rain conditions. Not to forget the stylish stub silencer adds to the design of new TVS Victor. 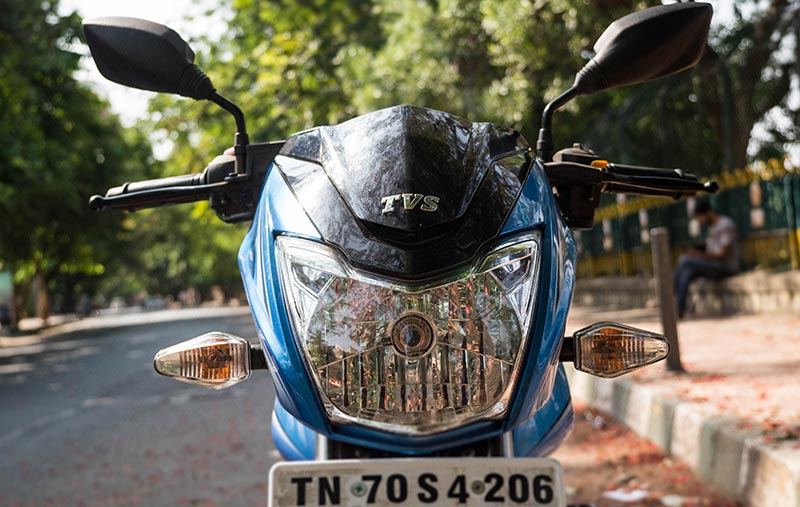 The Power-Economy mode indicator present in the bike’s dashboard is a boon for someone who wants to keep track of their riding usage. The red indicator lights up when the motorcycle is using more power while riding, otherwise it shows up the green, indicating that the bike is running in economy mode using the optimal fuel. This small detail which you see in this bike helps one in greater way to monitor and adjust their riding to be fuel-efficient or power-heavy. 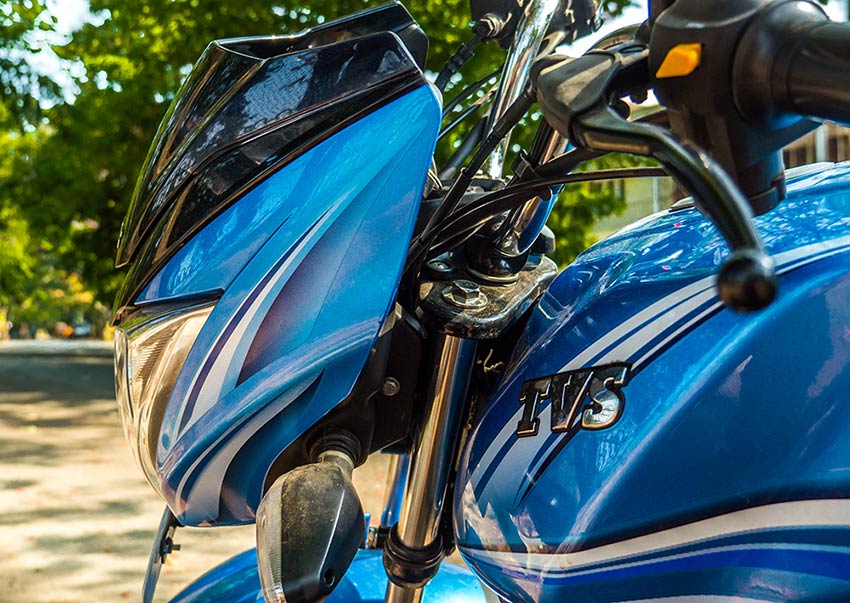 During the testing period, we used this motorcycle for traveling from home to office and vice versa, which is separated by a distance of 20 kilometres ( A total commute distance of 40Kms up and down everyday). Our route included both city traffic condition as well as the highways. The bike undoubtedly gets a thumbs up for delivering good mileage. Even after riding the bike for 4 days, for more than 180 Kms, the fuel indicator revealed fuel tank’s capacity as almost full with only one fuel stick out of 6 going down. 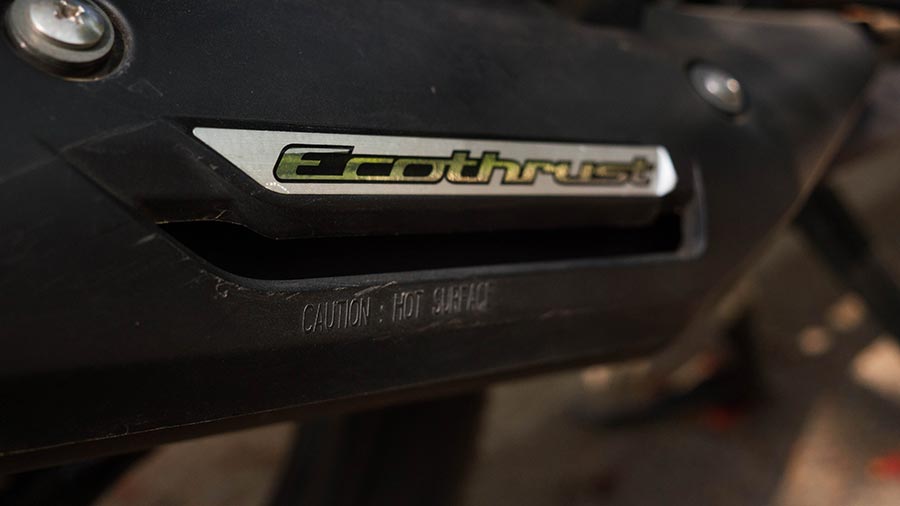 TVS claims mileage figure of 76 Kmpl for this bike – we think we were almost close to these figures.

Who wouldn’t be happy when the motorcycle is driven for hundreds of kilometres and the fuel indicator shows to you as “Full tank” or almost full? That is what happened to us. 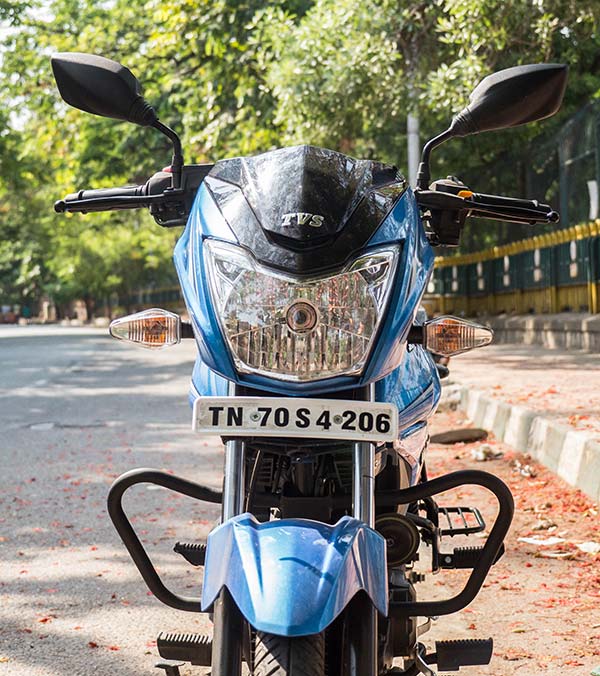 TVS Victor is powered by 110cc Ecothrust engine which is mated to a 4-speed manual transmission gearbox. Having mostly ridden the 150cc motorcycles in the past, we experienced that the bike is a great performer when it comes to handling and maneuvering in the traffic. As the bike is lighter (113Kgs), doing quick turns here and there, crawling between the halted vehicles in the traffic was very easy.

The bike gets 240mm hand operated disc brake in the front and foot-operated brakes at the rear. During our ride, the bike’s brakes were pretty responsive.

Talking about the suspension, the new TVS Victor gets telescopic oil damped front suspension in the front and at the rear it is 5-step adjustable hydraulic series spring suspension which prevents you from experiencing the “shaky” effect while you pass on potholes or sharp humps. 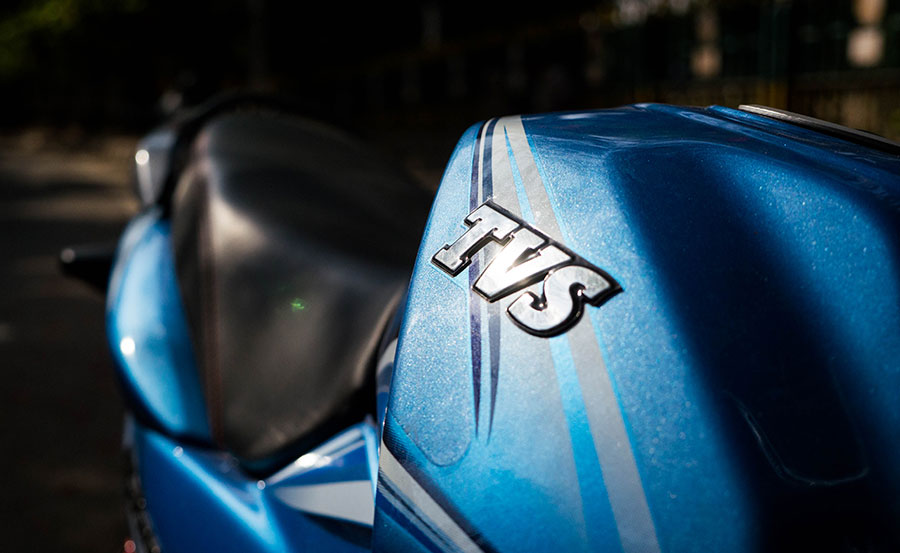 The new TVS Victor weighs 113 Kgs and has a ground clearance of 175 mm. The bike measures 1090 mm in height, 1980 mm in length, 750mm in width.  The fuel tank capacity of new TVS Victor is 8 litres including 2 litres reserve. The full specifications of the bike can be found on TVS Victor’s official website, we are adding the Engine and transmission specifications for your reference here: 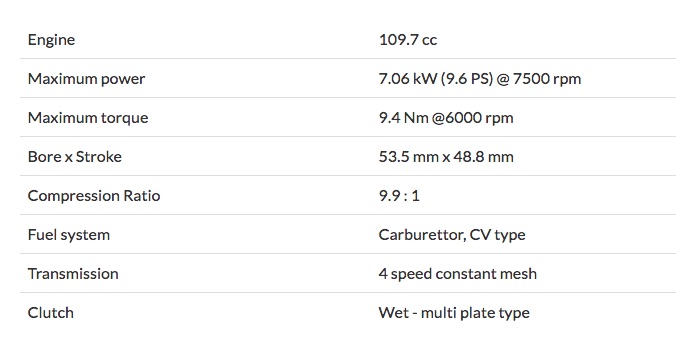 We would like to give few browny points for TVS Victor when it comes to “Ease of Use” department. As mentioned earlier – the power-economy indicator, and the blinking red light reminding you to switch off the engine when it is not in use, helps one to conserve fuel and drive more responsibly. 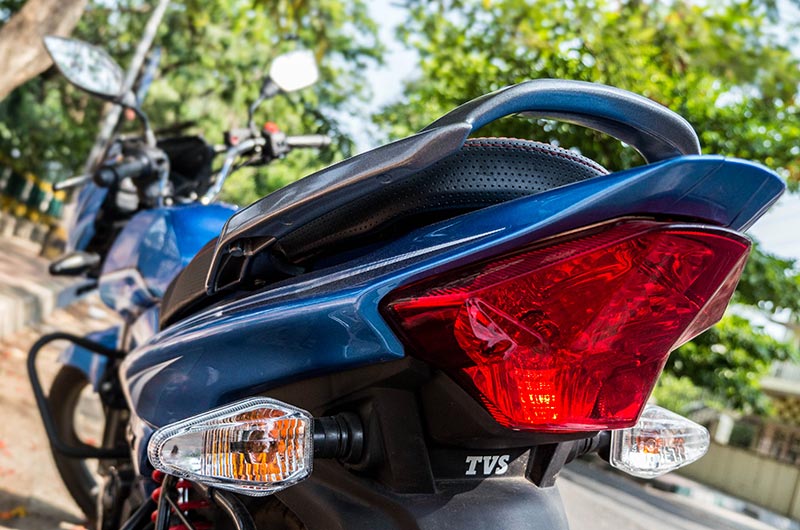 The second thing is the parking lights and hazard lamps. There is a dedicated switch for “The parking lights” (two blinking indicators) which is used when the bike is halted. The hazard lamps (day time running lamps) helps the bike’s presence in fog and rainy conditions.

Being a very affordable 110cc motorcycle, the bike still gets all important small-but-large features. 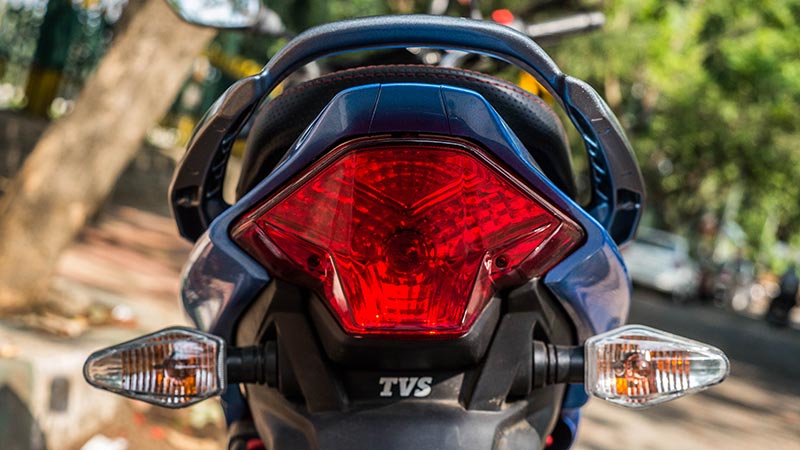 So, What do we think about the bike? We are quite impressed. Firstly because of the fuel economy factor which encourages one to ride for miles with smile. The new TVS Victor product is pretty honest as it is advertised and a real value-for-money package.

Considering City traffic conditions, where the rider hardly gets space to accelerate – we think it is a right choice for one to buy a 110cc motorcycle and make use of its “Fuel Economy“, “Handling and Maneuverability” factors instead of power heavy motorcycles which are mostly fuel burner.

TVS Victor is perfect commuter bike with an affordable price and the bike’s spacious seats make it a good deal for a family as well.

Also watch our video review on new TVS Victor 110 below: