Renault revealed the concept sometime back and now the production version has been revealed. Here is a first look review of the same. 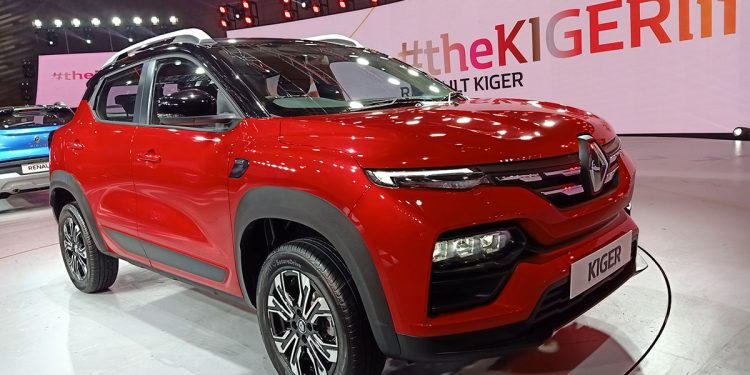 We know Renault for the Kwid, Duster and lately the Triber. The car-maker has been a better success than other car-makers due to clever products. Both the Kwid and the Triber are low cost but have a good amount of features and provide value for money, hence they have become success stories. Now Renault is planning the same for a subcompact SUV space with the Kiger. Renault revealed the concept sometime back and now the production version has been revealed. Here is a first look review of the same.

The Kiger is certainly a good looking compact SUV and also purely a Renault design. It is however a compact crossover but looks bigger than it actually is. It fits under the 4meters category and shares its dimensions with the Nissan Magnite- also based on the same platform as the Kiger. But unlike the Magnite, the Kiger is more aggressive looking. The front grille is big and joins in with the DRL set-up while big intakes are below which have the headlamps. It is a well defined exterior design and looks big from the front. You also have cladding and muscular wheel-arches which have 16-inch alloy wheels. Also present are functional roof-rails which gives it a further SUV touch. Being based on the CMF-A+ platform gives the Kiger flexibility and it is one of the widest cars in its class. What also stands out is how the sloping roof adds in further sportiness while big tail-lamps are there on either side which are C-shaped LED units. It also has a robust ground clearance of 205mm.

Renault have made big changes to the overall cabin design philosophy hence while there are some hints of the Triber here, the design is fresh and new. The 8inch touchscreen takes your attention while the centre console has neat looking aircon vents along with round controls for the auto climate and more. The steering wheel unlike the Triber is also mult-function while the instrument cluster is a fully digital one. The features list is impressive with smartphone connectivity, digital dials, climate control, cruise control, rear ac vents and even wireless charging plus an air filter. One of the big advantages of this design is also the space on offer as at the rear it is wide hence unlike some other compact SUVs, you can fit three people. Boot space is 405litres. Plus the legroom and headroom is pretty good.

Renault has recently shifted from diesel and post BS6 it only has petrol engines now. The Kiger also has two petrol engines including three cylinder engines. There is a 1.0 petrol as the range starter and that gets a 5-speed manual transmission though an AMT gearbox is also there. However along with that there is also a 1.0 turbo petrol which is also available with a 5-speed manual as standard but again Renault has made sure to attend to the automatic market with a CVT transmission. Renault will also give drive modes.

The Kiger has a lot of competition and it starts with its fellow rival called Nissan Magnite. The Magnite currently is the most affordable compact SUV and the Kiger would challenge that. The Kiger also has the same engine options but gets more options in terms of gearbox options. Then you have more expensive compact SUVs like Kia Sonet, Hyundai Venue which are having a lot more features but have a bit less space while costing a lot more. Then the Maruti Brezza, Toyota Urban Cruiser and Tata Nexon are also more expensive SUVs with bigger engines plus more features (in case of the Nexon) plus have more space. Like Nissan, Renault is targeting the space below the current premium subcompact SUVs and aiming to create a new mini segment there.

The Triber has been a success due to its value for money credentials and Renault is known for its aggressive pricing. Hence we expect an aggressive starting price of Rs 5.4 lakh for the base 1.0 petrol manual while the top-end CVT 1.0 turbo petrol would be comfortably under Rs 10 lakh. That would make it an affordable compact SUV but also promising style plus a decent amount of features and practicality. It is a very good effort on first impressions and might prove to be a tempting alternative to a premium hatchback/sedan also. Renault is betting big on the Kiger and this will certainly heat up the subcompact SUV space.