The Renault Kiger is priced between Rs 5.4 lakh to Rs 9.5 lakh for the top-end version while that means it is now the most affordable sub compact SUV with a price similar to the Magnite 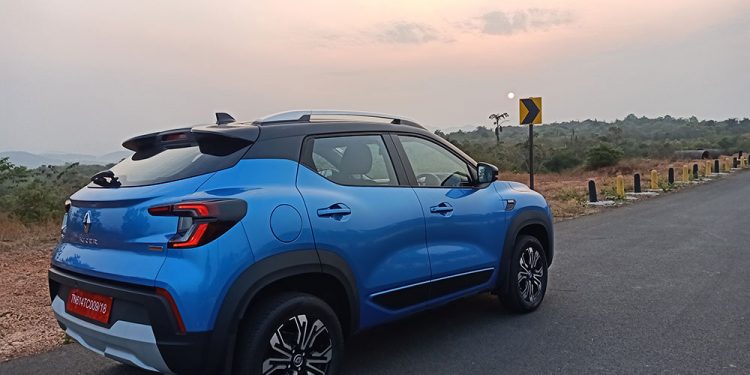 We all know Renault for the Duster and later the Kwid. It made its name with value for money cars which are spacious and practical. However along with the Kwid, it is with the Triber that Renault made a big comeback when it launched it two years back. The Triber was built to fit to an aggressive price and it gave buyers a compact MPV for the price of a hatchback. Now Renault is betting the same with the Kiger. It is based on the same CMFA platform as the Triber and gives buyers a sub compact SUV for less money. But should you consider the Kiger just for its price or there is more? Here is our review.

The Kiger looks compact and well, it is, since at 3991mm it is amongst the shortest subcompact SUVs. However it makes it up with having the most aggressive look amongst all SUVs. The front end gets the same different DRL/headlamp structure like the Kwid but with a bigger grille and slimmer DRLs. The grille itself is big and gets chrome elements for a premium look. The similarity to the Kwid is there but in the flesh, the Kiger looks different and quite attractive with the front being the best angle.

It also gets roof-rails along with cladding on the side and front while the wheel-arches are flared for extra presence. You also have an aluminium finish skid plate too. The top-end Kiger has 16-inch diamond cut alloys which are also good looking. Move to the side and you can see it is different looking from other sub-compact SUVs with a roof design which is less boxy and gives it a near SUV-coupe like roof-line. That gives it extra sportiness and also what gets your attention. The rear is also equally attractive with a small roof-spoiler and the C-shape tail-lamps which are big in size along with silver finish skid plate and cladding of course. The Kiger is less of a proper boxy SUV but as a design you cannot fault it and looks good. What also helps in the line-up of more youthful colours being mixed with a black combination for a dual-tone effect. In total you get six colour options like Ice Cool White, Planet Grey, Moonlight Grey, Mahogany Brown, Caspian Blue, Radiant Red with Mystery Black Roof, while the top-end gets another colour called as Radiant Red. The paint finish is also impressive.

Renault has put it the effort to make the Kiger cabin more premium and it certainly is when compared to even the Duster along with the Triber. There is more gloss black elements while the steering wheel seems better finished and quality overall seems impressive. Some bits like the lower-half of the dashboard could have been better else this is Renault’s best cabin and more premium looking than other SUVs like the Brezza. The steering wheel is a 3-spoke unit with buttons while there is a fully digital 7-inch TFT cluster. The lay-out is basic of the instrument cluster but the icons/graphics are pleasant and nice to use, especially with the Kiger being pictured below the speedo, which is a nice touch.

The other main screen is the 8-inch touch screen sitting on the centre console and it shares the same look as the Triber along with the position of the push button start button below. However the Kiger touch screen looks better and while there are not many menus with a simple screen, it is user friendly while the touch responsiveness is alongside class standards. Below that you get a round knob for drive modes alongside the gear-lever while than you have a nicely done storage space including one for your key! We would also say that the door pockets and big and can hold multiple small bottles of water as we tried. Oh and even the glove box is big with a 10.25 litres capacity.

In terms of space we would say that the Kiger is excellent value for money because just like the Triber, the platform makes for a spacious cabin. The front seats are a bit thin but are fairly comfortable while the big USP is the rear seating which gets a near flat floor and also has the width to put in three people without too much discomfort. The legroom is very good and better than other subcompact SUVs while even the headroom is nice, the seats could have had better cushioning though. The boot is also the biggest in class with a massive 405litre capacity.

The main talking point is the 8-inch touch screen which gets wireless Apple CarPlay and Android Auto while there is also wireless charging, multi connect Bluetooth with up-to 5 devices. There is also reverse camera with parking sensors while the camera output in the screen is of nice quality. Other features include an Auditorium 3D Sound system by Arkamys, which has very good sound quality, a unique hands-free access card like key, climate control, ambient lighting, back lit steering controls, rear ac vents, powered mirrors, a PM2.5 Clean Air Filter, four airbags and more. There is no sunroof or cruise control though.

The Kiger gets offered with a standard 1.0 petrol with a manual and an AMT gearbox while higher-up in the range you get a 1.0 turbo petrol with a 6-speed manual and a CVT automatic. We tested the manual turbo-petrol and that we think could be the one to buy in the Kiger range. The engine makes 100PS and 160Nm while it has a 5-speed manual gearbox. Start it up and the Kiger is fairly silent and the clutch/gearbox is very light. On tight roads we tested the Kiger felt at ease and the light steering also helps.

The turbo petrol is the one to buy because of the decent amount of torque which enables for a relaxing city drive. We use 3rd gear on the narrow Goan roads and that is enough and it does not require many shifts to keep the engine going. There are some vibrations which come in into the car and the engine does get a bit noisy. The Kiger though is fun to drive as it is light and goes up-to high speeds easily while the manual gearbox gives better control. We must mention the drive modes which are important as Sport mode gives the car a better throttle response and that is when we liked the Kiger the most while normal mode is decent and then you have the eco mode, being there when you need to save fuel hence the power delivery is blunted.

In terms of mileage, using the Eco mode will give numbers close to the 20kmpl official figure while else it is 10-13kmpl depending on the way you drive. The Kiger is also fun in the corners as it is light plus agile along with a slight firm suspension. The good news is that it does not float in the corners and high speed stability is good. The 205mm ground clearance is useful too.

The most obvious rival is the Nissan Magnite but the Magnite is bigger however the Kiger has the edge in terms of design and a better cabin plus the inclusion of an AMT. The Magnite may appeal to more traditional SUV focused buyers due to its design though. The Sonet and Venue are more expensive having price range between Rs 6.7 to Rs upwards of Rs 12 lakh in case of the Sonet. The Brezza is also more expensive at a starting price of Rs 7.4 lakh to Rs 11.2 lakh while lacking in features which the Kiger offers. The XUV300 and Nexon are also bigger, better equipped but also more expensive. The Kiger is the value pick here for its styling and price.

The Kiger is priced between Rs 5.4 lakh to Rs 9.5 lakh for the top-end version while that means it is now the most affordable sub compact SUV with a price similar to the Magnite. The Kiger looks great while also being spacious along with a good enough features list while the turbo petrol is well suited for an SUV buyer. It really does everything and that too at a good price. If you want a subcompact SUV without spending too much then the Kiger should be your pick.