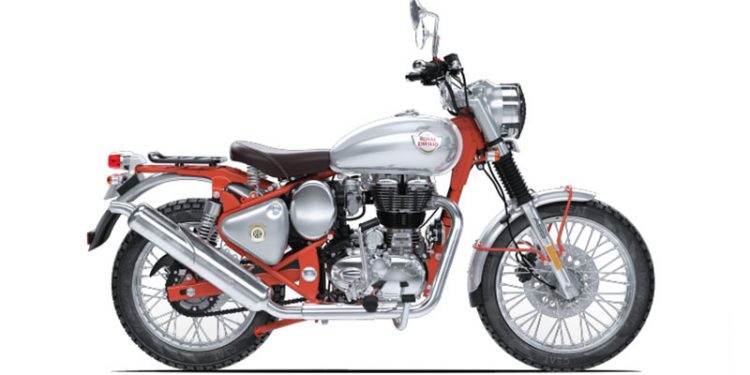 Legends live on! And the Royal Enfield Bullet is the best testimony to that. The Bullet’s enduring journey over the last 87 years – since 1932 – has given Royal Enfield the privilege of being the world’s oldest motorcycle brand in continuous production, with the Bullet being the longest running motorcycle model in the world. This journey of the Bullet has been both, iconic and legendary, but perhaps the most important story in its history is the legacy of the Royal Enfield Bullet at the Trials Championships. Inspired by this legacy of Royal Enfield at the International Six Days Trials and as a tribute to the prolific Trials Wizard, Johnny Brittain, Royal Enfield launches theBullet Trials Works Replica 2019.

The Bullet Trials will be available in 500cc and 350cc in India, and will have distinctive design and functional features that will be redolent of the heydays of classic trials competitions from the 1940’s and 50’s. The new Bullet Trials will feature tyres with block tread pattern for improved off road grip, and a reinforced handlebar with cross-brace. The motorcycle also features a raised silencer for improved ground clearance in addition to being equipped with dual channel Anti-lock Braking System (ABS).

Royal Enfield has had a long and proud history of building resilient and enduring motorcycles, the Bullet has been the most enduring of them all. The Bullet Trials motorcycle ridden by Johnny Brttain is unforgettable and a reminder of the machine’s prowess over challenging terrains and its trials pedigree. The Bullet Trials 2019 motorcycle is inspired by Johnny Brittain’s trials motorcycle that won more than 50 championships between 1948 – 1965 and it is also a fitting tribute to our seminal design and engineering expertise that introduced the swingarm for the first time in 1949 with the Bullet. I am confident that this motorcycle will be received well amongst Royal Enfield enthusiasts in India”

The history of trials competitions can be traced back as early as the 1920’s when motorcycle manufacturers used ‘reliability trials’ to demonstrate their machines’ tractability, manoeuvrability, and overall endurance, in the UK and across Europe. However, when road surfaces improved in the 1920s, trials competitions went ‘off-road’ to dedicated courses, where challenging terrain provided a gruelling test for both man and machine.

Introduced first in 1932, The Royal Enfield Bullet was heralded as a motorcycle that was ‘perfect for touring or trials’. Soon after its introduction, the Bullet racked up successes from the 1935 International Six Days Trial (ISDT) with the Royal Enfield team being the only British motorcycles riding squad that did not drop a single point. In 1937, Enfield riders won a record-breaking 37 trials trophies along with six gold medals in the ISDT, with legends such as Charlie Rogers, George Holdsworth and Jack Booker riding a 250cc and 350cc Bullets and the 500cc Special Competition Model to victory.

But it was in the post-war era that Royal Enfield truly came to the fore in trials, with the all-new 350cc Bullet designed by Ted Pardoe and Tony Wilsone Jones, and incorporated the revolutionary swinging arm suspension with oil damped shock absorbers for the first time on any production motorcycle. This changed the course of motorcycle design forever. With the new swinging-arm Bullet, Royal Enfield took the unorthodox step of revealing it at a trial event, entering three prototype machines in the 1948 Colmore Cup. From thereon, the machines were selected for the British Trophy team to take part in the 1949 ISDT, held in San Remo, Italy. Success followed with both Bullet riders, Charlie Rogers and Vic Brittain, winning gold medals and contributing to the British team’s first place position and Bullet Trials with the swingarm became the backbone of the range for the following 14 years.

It was in fact the proven success of the Bullet Trials motorcycle over challenging terrains that caught the eye of the Indian Army. It was around 1952 when the Indian Army placed an order of 800 Bullet motorcycles to patrol the harsh border regions of Kashmir and Rajasthan directly leading to the creation of Enfield India in 1955. This year we are also commemorating the 70th year of the Bullet Trials’ ISDT winning motorcycle that was showcased with the swingarm for the first time in 1949.

The Royal Enfield Bullet has always had a fiercely loyal customer base in India and has been in existence for over 8 decades across the globe. In India, the Bullet has gained iconic status and has been associated with endurance and resilience, with motorcycles being passed on from one generation to the other. Taking the trials heritage of the Bullet marquee ahead in 2019, we are pleased to announce the availability of Bullet Trials in India.

The remarkable story of the Bullet Trials dominance at the ISDT championships is incomplete without Johnny Brittain, who dominated the Trials championship on the Bullet Trials 350 for 15 years. Son of Trials legend, Vic Brittain, Johnny joined Royal Enfield as an 18-year old and picked up his first gold medal at the ISDT in 1950. On his famous 350cc trials Bullet, registration number HNP 331, Johnny won the prestigious Scottish Six Days Trial twice, an arduous 900 mile contest spread over six long days, (1952 and 1957), the formidable Scott Trial twice (1955 and 1956), the tough British Experts Trial twice, where he was its youngest ever winner (1952 and 1953). Johnny amassed over 50 major championship wins and a huge haul of open trial first places with 13 gold medals over 15 years.

Enhancing the trials riding experience of the new motorcycle, the Bullet Trials will be available with more than 30 Genuine Motorcycle Accessories from Royal Enfield to choose from. Royal Enfield has designed and developed 5 specific motorcycle accessories for Bullet Trials – compact engine guard, headlight grill, number board, aluminium sump guard and the handlebar brace pad. Royal Enfield apparel range including t-shirts inspired by the Bullet legacy are available on Royal Enfield’s online store – store.royalenfield.com and also across all our stores in India