Royal Enfield Himalayan has proven to be a machine capable of performing what’s it’s built for. With the new BS6 Himalayan in our hands, it was our turn to find out how much the Himalayan has changed from the previous offering. 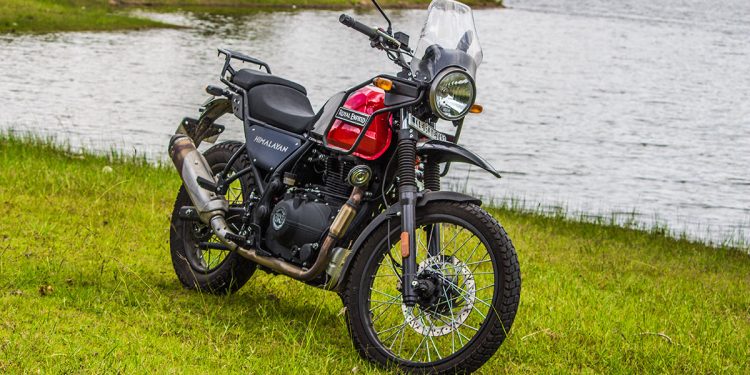 Royal Enfield Himalayan has proven to be a machine capable of performing what’s it’s built for. With the new BS6 Himalayan in our hands, it was our turn to find out how much the Himalayan has changed from the previous offering.

The immediate thing you would notice is the change in color schemes Royal Enfield is offering with the BS6 version. I was always a fan of the single-color Himalayan, but for those who weren’t, there are now dual tone colors to choose from. The one we rode came wrapped with a Black and Red paint scheme which did turn heads in traffic. There are multiple colors to choose from, and in my opinion all of them look pretty good.

Once on the bike, the ergonomics feel the same as the previous version, no change in riding position and the seat height also remains the same at 800mm. All the dials still remain and the only difference, visually on the dash, is the ABS on/off button. The console is user friendly and very easy to read at first glance.

The Himalayan now comes with a much-needed Hazard light switch which most tourers will be grateful for. Furthermore, the Himalayan comes 5kgs heavy and supporting that is a sturdy side stand which Royal Enfield claims is reinforced to handle the extra weight.

How is the BS6 Himalayan to ride on pavement?

The riding position is as comfortable as before, which means mile munching is no problem at all. The Himalayan pulls clean from stand still and the ease at which it does that has set a new standard for Royal Enfield.

Riding the Himalayan in the city is easier though the bike weighs close to 200kgs, but wait, that is only until you head into bumper to bumper traffic. Managing the Himalayan in stop and go traffic can be not so good experience especially if you’re not used to handling big heavy motorcycles. I wasn’t, so not so pleasant for me.

While on the go, the weight distribution is impressive and not once did I feel I was riding a hefty motorcycle. The ABS makes a big difference in the city and on slippery roads, but riding the Himalayan hard in the city will just make you dislike the bike.

The Himalayan is not meant to be pushed in the city like your everyday street bike, and it is happy if you do not. But even if you do, the great amount of torque this machine has to offer will help you keep continuous momentum. For numbers’ sake, the Himalayan now produces 24.3bhp and 32NM of torque at 6500rpm and 4000-45000rpm respectively. Riding the Himalayan in a relaxed manner will result in happy commuting.

The Himalayan, as it has been known for, shines when you take it out on the highway. Once you set yourself up to speed and keep going, this motorcycle will take you places with ease. Overtaking on the highway is a simple affair and you could be doing triple digit numbers without breaking a sweat. The torque this bike offers makes up for the low power the 411cc engine the Himalayan comes with.

Getting into details, the windscreen on this machine is fairly satisfactory. There is still a considerable amount of buffeting and it is not a pleasant feeling when you’re doing 100kmph+ on the highway. The seat remains soft which Royal Enfield could’ve improved given the long hours in the saddle the Himalayan owners prefer doing.

Braking has gone up a notch and again, thanks to ABS, the bite is decent and one would expect expected a better feel to make the 200kg machine come to a halt or navigate obstacles. But throwing the Himalayan from one lane to another while traversing on the highway is a herculean of a task. Sticking to a single lane makes the commute much easier.

Does it fare well off the road?

The biggest and the only concern with the Himalayan to take it off road is its weight. Moving the Himalayan around on tight trails needs some muscle. God help you if you get stuck with it because this 200 kilo Enfield is a monster to pull out.

But there are better reasons why you should take it off road and that starts with the confidence inspiring position when you stand up. It is extremely easy to stand on the pegs and even amateurs will enjoy doing it. The Himalayan is trust worthy off the road and credits be given to the standing position. If the seat height is to be increased a bit more, moving around on the bike could be easier to tackle off road patches sitting on the machine. Due to the low seat height, off road visibility is reduced, which makes sitting and riding the Himalayan off the road not a (visually) good experience.

That said, the 41mm front suspension offers 200mm of travel and the rear gets 180mm. The rear monoshock easily bottoms out which leads the main stand to hit the ground every time it does. We did ride around some tough trails and the Himalayan did very well taking us through it all while getting us out of slush and mud with the amount of torque it offers.

Turning off the ABS makes off-roading immensely fun because the brakes are just right to slide the motorcycle at your will and smile every time you do it.

Does the Himalayan still live up to the name?

All in all the Himalayan remains to be a well finished, sturdy and a capable motorcycle from Royal Enfield. The vibrations are kept at bay and the Himalayan rides like a charm on the highway. The adv tourer segment is now growing and the first motorcycle to be made for a genre that is now booming was the Himalayan and is still up there in the competition game against its rivals.

With the addition of switchable ABS, better color schemes and the BS6 motor, the Himalayan stands priced at Rs 1.89 lakhs(Ex-showroom Bangalore) and still a pretty good buy.