Himalayan Odyssey 2022 will witness riders covering a distance of over 2,700 kilometers in 18 days on their Royal Enfield Himalayan motorcycles. 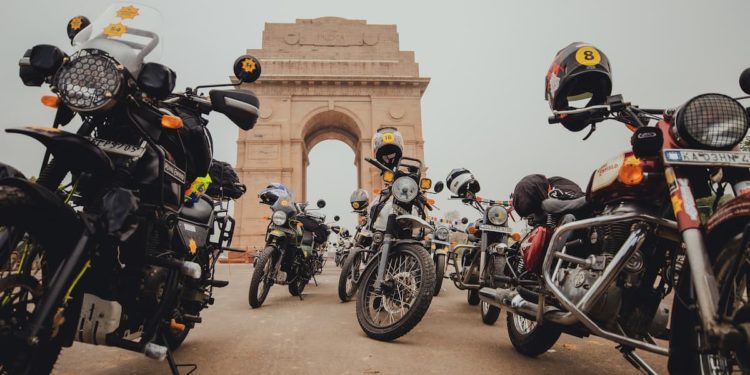 Amid the thunderous roaring of over 70 Royal Enfield motorcycles and the contrasting chants of the lamas, early morning today at India Gate, the 18th edition of Royal Enfield Himalayan Odyssey was flagged off in Delhi. With 70 riders embarking on a journey to Umling La, the highest motorable pass in the world, via some of the most breath-taking terrains in northern India, Himalayan Odyssey 2022 will witness riders covering a distance of over 2,700 kilometers in 18 days on their Royal Enfield Himalayan motorcycles. With a view to reduce impact on the fragile ecosystem of the Himalayas and also raise awareness about environment friendly tourism, this edition of the Himalayan Odyssey will continue to root for the adoption of Responsible Travel practices by its rider community, in a bid to #LeaveEveryPlaceBetter.

Returning after a hiatus of three years, this year, the Himalayan Odyssey – one of the biggest and oldest motorcycle rides of its kind in the Himlayas, will see riders follow two different routes. While both groups will be flagged off from Delhi together, one group will ride to Ladakh via the picturesque Manali route and the other will traverse the rugged Sangla-Kaza route, before finally converging at Leh. Riding through Ladakh and Spiti will challenge the rider in terms of weather and terrain, while also experiencing an adventure of a lifetime.

Flagged off from the India Gate – New Delhi in the traditional Ladakhi ceremony, the riding contingent were blessed by Buddhist Lamas who chanted prayers to bless the riders at the flag-off ceremony. This year, participants for Himalayan Odyssey congregated from across Singapore, Saudia Arabia, the USA, as well as from cities like Mumbai, Pune, Madurai, Delhi, Bangalore, Anantapur and Vijayawada, among others, to be a part of this epic ride.

“The Himalayas are Royal Enfield’s spiritual home, and the Himalayan Odyssey is an ode to the undying spirit of exploration and motorcycling adventure since its inception in 1997. This edition marks a significant chapter in our endeavors to explore more as we travel to Umling La, the new highest motorable pass in the world. In 2019, we took a step towards reducing the plastic footprint with our #LeaveEveryPlaceBetter initiative and this year we continue our journey towards preserving and sustaining the delicate environment of the Himalayas with our ‘Responsible Travel’ initiative. We hope our efforts will help nurture an environmentally aware and conscientious community of riders and these 70 riders will become an inspiration for responsible motorcycle journeys, for other riders as well.”

Traversing through some of the roughest terrains and highest mountain passes in the world, the Himalayan Odyssey contingent will continue to promote the concept of responsible motorcycle journey through various efforts. In Himalayan Odyssey 2019, Royal Enfield introduced its #LeaveEveryPlaceBetter initiative which aimed at discouraging participants from using bottled water, and facilitating purified water by installing dispensers along the key riding route in Ladakh. In its efforts towards remaining green, this year, all participants have been given a Life Straw and a green kit to significantly reduce their plastic consumption. The ride will also encourage participants to dispose of all waste responsibly during the ride.

Working with local communities and promoting them is also a key aspect of Royal Enfield’s Responsible Travel campaign. As part of this campaign, the brand has introduced several initiatives to empower the local community by supporting over 60 homestays in remote locations in Ladakh, rural electrification with solar power impacting 682 households in rural Ladakh. Royal Enfield is also closely working with the local administrations to monitor waste management in these regions. This year, the cavalcade will also make a stop at Chumathang on 10th of July where Royal Enfield is supporting the Chumathang Football Tournament, which will see participation from almost 300 children.

June marks the start of the riding season in the Himalayas with thousands of riders traversing the Ladakh and Spiti region of the Himalayas. Royal Enfield has set up a comprehensive service network in the region that caters to the riders who require service support at 17,982 feet. Under this program called the ‘Leh Rider’s Support’ the company has nearly 66 service touch points across 6 routes with 175 skilled service technicians to ensure that the riders have a hassle-free riding experience throughout the riding season.