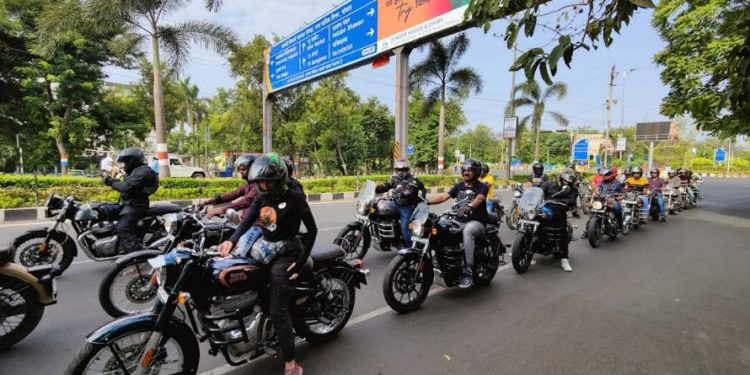 Waste generation and its improper disposal has been a cause of growing concern globally. A problem far more exacerbated in developing countries, irresponsible disposal of waste  is known to create serious health, safety, and environmental consequences. Royal Enfield, the global leader in the mid size motorcycling segment (250-750 cc) has been making concerted efforts towards the regeneration of the Himalayan landscape. The motorcycle maker has been actively involved and undertaken significant steps to provide holistic solid waste management solutions in the region. To further its commitment towards raising awareness and influencing behavioural change on the issue, Royal Enfield organised  a pan-India Clean-up Ride on the occasion of World Environment Day. Observed across 17 states and 5 union territories, the ride saw the participation of over 2000 Royal Enfield riders and citizen volunteers with a focus on uniting communities around the country to demonstrate concern towards efficient waste management.  The rideouts across different regions were flagged off by eminent personalities including Bhaichung Bhutia, Former Captain, Indian National Football Team, and Tsewang Namgail, Wildlife Biologist & Scientist, Venerable Konchok Paldan, Buddist Scholar.

The pan India Clean-up Ride was organised with a purpose to promote as well as encourage environmental awareness and facilitate discussions on waste management and associated issues by encouraging and coordinating clean-up campaigns and other activities at the community level in selected states led by the Himalayan ecosystem. As a part of this initiative, Royal Enfield riders along with select NGO partners and volunteers came together to clean up designated/popular sites, while ensuring disposal of the collected waste is managed responsibly. The identified sites across cities included areas such as beaches, waterways, parks and other highly frequented public spaces. The initiative encouraged citizens to take greater care of their community areas on an ongoing basis with an aim to elevate health, sanitation and safety standards.

Some of the key regions covered with the initiative included Jammu & Kashmir, Punjab, Uttarakhand, Himachal Pradesh and Delhi in North; Madhya Pradesh in Central India; Assam, West Bengal  and Sikkim in East; Karnataka, Andhra Pradesh and Tamil Nadu in South and Goa in Western India. Royal Enfield was supported in this Clean Up ride by civil society organisations such as Snow Leopard Trust, Earth Day Network, Waste Warriors, The Midway Journey, Football Foundation Bhaichung, Plastics for Change and Responsible Earth organisation among others.

Royal Enfield is working relentlessly towards encouraging riders to travel responsibly especially with its marque rides to the Ladakh region, which have positively impacted the livelihood of local communities. As part of its Social Mission, ‘Responsible Travel’ Royal Enfield also works closely with local administrations to monitor waste management in these regions. Royal Enfield has set up two waste management centres (Tsangda) in Ladakh, one in Kharu and one in Pangong in collaboration with local authorities. From partnering with NGO, Waste Warriors, to activate and empower local heroes in  the non revenue villages around Jim Corbett Tiger Reserve in the north, to supporting the forest departments with expertise and infrastructure to manage waste in Anamalai and Mudumalai forest reserves in the south, Royal Enfield aims to create efficient, sustainable and replicable models of Solid Waste management across the country and the globe.