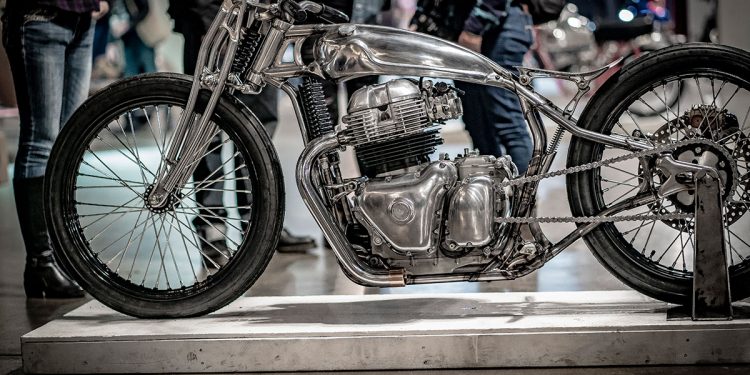 Royal Enfield launched the ‘Custom Program’ in 2016 to inspire and foster creativity amongst motorcyclists, and to activate and promote the Royal Enfield custom ecosystem. Amongst the motorcycling community, Royal Enfield’s motorcycles have always been the perfect canvas for customization and self-expression, given the motorcycles’ simple yet evocative design language.

Continuing to inspire and foster creativity amongst motorcyclists, Royal Enfield recently unveiled the ‘Kamala’ an all new custom motorcycle based on the Continental GT 650,  built by Cristian Sosa of Sosa Metalworks. The Kamala is inspired by vintage board track racers – its lean form and large thin wheels perfectly proportioned to frame the 650 Twin motor at its core.  While inspired by one of the most exciting vintage motorsports, it is also a completely original creation. Metalworks truly stands out as Crisitian Sosa had hand fabricated a build for Royal Enfield based on the 650 Twin right from the frame to body, suspension & paint scheme. The Kamala first premiered at The One Moto Show in Portland, Oregon USA in February 2020. Interestingly, the motorcycle won one of the top awards at the show although it wasn’t fully complete.

The Kamala, presented in bare metal, lets the materials speak for themselves – steel, aluminum, brass – each reflects the light differently, glowing in the countless hours that led to their final forms. The metalworks take the form of a beautifully narrow swept tank, perfectly formed around a completely bespoke rigid frame made of chromoly steel.  Inspired by early Royal Enfields, a sinuous girder fork connects the wheel to the frame at the front, and a beautifully detailed springer seat arrangement holds the rider perched behind the motor on an almost impossibly narrow spring.  All these parts perfectly complement the pure metal construction and simple retro forms of the 650 Twin motor, working together in a composition that is both tough and delicate at the same time.

Cristian formed Sosa Metalworks with his brother, Roberto, in 2012. Cristian is a master of metal and his builds are like free-form jazz, each piece complementing the others yet completely unique, a sculpture sitting with other sculptures to create the final motorcycle. Already an experienced metal, worker from years as lead fabricator at Count’s Kustoms, Sosa has quickly become one of the most respected names in metal fabrication for cars and motorcycles worldwide – his builds have been featured in shows from his hometown of Las Vegas to Yokohama, Japan, and everywhere in between.