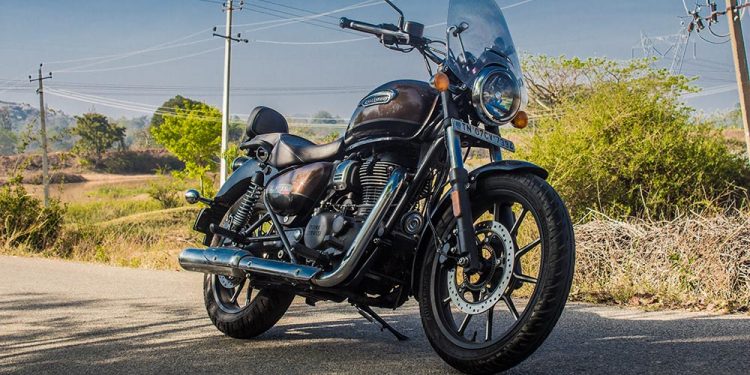 ‘Thunderbird’ is a name associated with Royal Enfield for as long as I can remember. Now, not only the name, but also the motorcycle has been replaced by the all new Royal Enfield Meteor. That’s one thing to start of this review with, and let me tell you, although the Thunderbird was a great motorcycle by itself, the Meteor seems to be a worthy replacement.

The Royal Enfield Meteor is an all new motorcycle in the sense that pretty much everything on this machine is new, except, of course the similar looks it shares with the Thunderbird. The name change is justified because Royal Enfield plans to launch the Meteor in international markets and ‘Thunderbird’ cannot be used in few of them for trademark issues.

The Meteor looks undeniably Royal Enfield with a stance of a cruiser, which is what the Meteor is. Upfront, the motorcycle looks neat and feels like an upgraded version of the outgoing Thunderbird. A circular halogen headlamp unit is internally surrounded with LED DRLs. Although the design is carried over, the LEDs look rather dull in broad day light. Wire spoke wheels make way for machined alloys with a 19-inch front and a 17-inch rear, which come fitted with either Ceat or MRF rubber. The rear mudguard is bigger, the side panels have a new design and the font mudguards are all plastic which aides in weight reduction. Wide rider and pillion seat not only looks comfortable, but feel comfortable too. Sit on them and you notice a new circular instrument cluster which informs the rider about the speed, amount of fuel carrying, gear position, a couple of trip meters and time.

The information dash is completed by a Tripper navigation unit on the right hand side. This system allows you to connect your phone through the Royal Enfield App, and is powered with Google Maps and displays turn by turn navigation, which we figured it to be rather useful. A 12V USB charging port is housed under the left end of the handlebar which can be used to charge a mobile phone. The all-new rotary switch gear on the Meteor is an innovative one and I personally like the way it clicks, looks and feels while using it. Of course, one has to get used to it, but wasn’t difficult for me and I liked it in the process.

Royal Enfield claims to have 5,00,000 design options available to customise the Meteor to your liking in most aspects of the motorcycle. You could opt for a small windscreen, a different colour scheme, and even a customised seat to accommodate shorter riders. Not to mention, the bike seen in pictures is the top of the line Supernova variant with dual tone paint, a tall windscreen and a pillion backrest.

In terms of quality, Royal Enfield has come a long way and we, at least I, can now call it a rather sophisticated design. The fit and finish, and attention to detail is seen in multiple places be it the nicely sticking out circular LED surrounded taillamp, or the ‘Royal Enfield’ embossed foot-pegs. One thing I wished Royal Enfield added, in terms of better functionality are LED indicators. The design is maintained RE like with chrome mirror stems, chrome exhaust and of course chrome badging on the pillion seat backrest and fuel tank.

The Meteor comes with Twin Downtube Chassis, an all new 350cc Air-cooled BS6 motor, Dual Channel ABS, and a 5-speed gearbox. The power output is 20.2 BHP @ 6100 RPM, and torque figures stand at 27 NM @ 4000 RPM. This motor replaces the old one and we expect the new Classic 350 to come fitted with this as well. Rotate the switch to the left to start the machine, and it immediately cranks to present us with a toned down thump which most RE enthusiasts might dislike. To me, I believe it’s the sound of sophistication and the evolution of the RE brand into the modern world. It sounds nice to the ears and definitely feels like it’s coming out of a metal unit. Rev it higher and the vibrations seem to be kept at bay.

Get on the machine and the 191 KG weight is immediately felt. Well, this is only until you get going and you will be surprised about how the weight disappears after that. The Meteor has a nicely designed handlebar to keep the rider comfortable and has an impressive turn radius which makes the Meteor easy to ride around in the city. It just took a couple of KMs for me to get adjusted to the machine, and me being a non-RE person, I was impressed with the way it zipped around. The power delivery is well balanced and there is ample amount of low end torque for better city use without urgent or delayed power when required. You could move through traffic in a single gear and really have to shift when the traffic clears out. The fact that there is so much usable low end power, and that the motorcycle uses this with such less vibrations on the handlebar and foot-pegs, makes me like the Meteor further.

The gear shifts are a great improvement and the clutch definitely feels light. The smoothness of gear shifts, a comfortable seat, neat usable switch gear, along with a good riding position makes it a joyful ride. Out on the highway, the Meteor has enough power to keep the rider cruising at 80kmph+ with next to no vibrations. It’s a great improvement in terms of RE standards and I can safely say it works really well. With a 15 litre fuel tank, the Meteor comes with a good range before you have to make a fuel stop.

170mm ground clearance is good enough to navigate speed bumps and accommodate a minute amount of off roading. While the front suspension takes in bumps quite well, the rear telescopic suspension is rather stiff and hurts the rider’s back while going over bad patches. Braking is decent for a cruiser, and the front brake is a little too responsive at low speeds, and not so much as digits climb. The rear, however, has a good feel to it and the ABS definitely helps it further.

The stability of this Meteor on the highway is impressive and the cruise-ability between speeds 80-100kmph is where this machine shines. Vibrations start to creep in only after 110kmph and I would be happy to keep the machine well below 100kmph.  The sweet spot for this motorcycle is when you slot in third gear and the torque is immediately felt, pulling the motorcycle forward. Like all machines, the Meteor has a way of riding it and it feels comfortable when you relax yourself on the motorcycle. Push it too hard and you will unsettle it, ride it too slow and you will miss out on the feel. The line in between is where the meteor likes to be kept and will keep you happy in return. Ferrying a pillion is easy and comfortable – thanks to the backrest – on 100km weekend runs.

The Meteor surprisingly corners well, but needs some time to get used to. Winding road up Nandi Hills didn’t seem too difficult for the Meteor and could run up and down as much as you’d like it to. Overall, the bike is a good mixture of city behaviour and highway comfort and definitely fits into the well behaved category.

The Meteor is an impressive improvement for the Royal Enfield brand and it definitely is a great product. Replacing the Thunderbird might not be an easy challenge, but I wouldn’t jump to a conclusion without riding this motorcycle. This is a machine of sophistication and quality and Royal Enfield has done well to introduce to us a modern day product. Typical Royal Enfield fans might welcome this with open arms or just dumb it down, but for a fresh RE customer, this is something to be happy owning.

Priced at 1.75 lakh ex showroom, the Meteor goes up against the Honda Hness CB 350, Benelli Imperiale 400, and the Jawa 42. How good does the Meteor fair against its rivals? Watch out for those on Gaadikey.

Have you ridden the Meteor yet? Or going to? Let us know in the comment section down below.