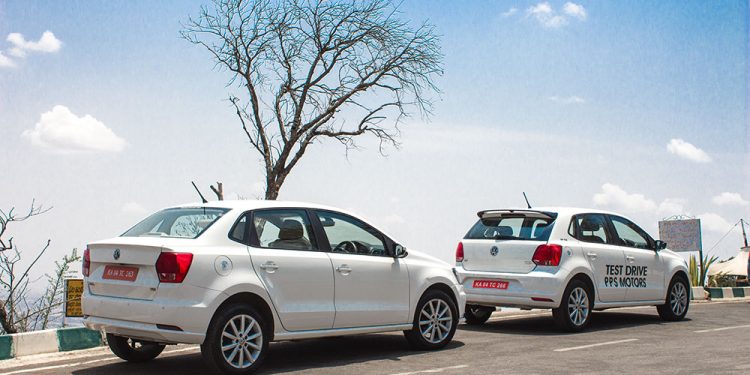 Inaugurating its 1st Pop-up store in India, Volkswagen took to their cars to celebrate by organizing a drive from Volkswagen’s Bengaluru Central showroom to the city’s favourite weekend getaway, Nandi Hills. The cars to drive were the Polo GT, Vento, Ameo, Passat and the Tiguan.

The obvious choice for us to drive until we exit the city would’ve been the Ameo, given that it’s a compact sedan and a deserving city car. But our urge for the Polo GT TSI’s 105 PS motor saw us jumping in the Ameo much later.

Driving the Polo around the city was easy with it’s 7-Speed DSG Automatic gearbox and with drive mode slotted in for the first 15kms around the city, was quite boring for the GT, I must say. But once the straight roads were in sight and drive mode gave way to sports, the GT felt natural and confident, and so did the driver.

Sports mode makes way for better acceleration, better shifting points and the engine revs cleaner. The power delivery is aggressive and the DSG gearbox makes it feel seamless. The DSG gearbox does its job really well, but if it interests you, there is also a manual mode for driving pleasure. I did feel a tiny bit of lag initially, but given the way it pulls post that, the lag can well be ignored.

As we hit the foot of Nandi Hills, we hopped in the Ameo to drive the 1.5 Litre Diesel motor with a DSG transmission, up the hill. It  is equipped with the same engine as the Polo GT TDI and the Ameo promises to do justice to it. It pulls well, has a stiffer suspension which boosts confidence to push the Ameo further and be happy doing so.

We did not have a Petrol Ameo in our clan, but we didn’t need one. The diesel Ameo performed just well to keep us happy, and for a brief time we drove it, we were impressed. Would’ve loved to drive the Ameo for longer but the 4 wheel drive Tiguan was next to take up(down) the downhill test.

The Tiguan comes with just one engine option that is the 2.0 Litre Diesel which throws out 143PS and 340Nm torque and it was the most fun car to drive for the day. By the look of it, the Tiguan is not bulky, it did not feel like we were sitting on top of the car while driving it and it sure did make us feel confident pushing it downhill. With ESP (Electronic Stabilisation Programme) the Tiguan felt planted, quick with minimized body roll.

With 4 drive modes – Normal, Snow, Off-road and Off-road Individual, the car was slotted in Normal for the most part and we did not really get to drive it Off-road or on snow.

Passat on the other hand is a way Volkswagen offers luxury, equipped with a 2.0 Litre 177PS Diesel engine. The interiors sported neat finish wooden cladding across the dashboard and to my surprise, it had an analog clock at the centre of it.

Passat was a comfortable car to drive and the suspension felt soft to glide over bumps and pot holes with ease. Passat for what it was, was tuned for a seamless drive and the 7-speed DSG gearbox showed us what it was capable of. This was a car we  could drive for miles and not be exhausted doing it, but we would love to test it further on a different day to give you more.

The last of the lot was the Vento and the immediate highlight was the cabin noise. The 1.5 litre Diesel engine producing 110PS of power has been around for quite some time now and was our choice to drive back to the city. There was a noticeable lag with accelaration and we did not really get a chance to drive it with sports mode. With what I was told, the lag was ironed out for a smooth drive with a combination of the 7-speed DSG.

Overall, the 7-speed dual clutch gearbox was the standout which has been appreciated throughout and will not stop here. With the GT talking to us with its performance, Tiguan for being simple, yet agile, Passat for a relaxed journey, Ameo for a surprise and the Vento with a typical sedan nature, the Volkswagen drive was an experience rich in cars and technology.

We would’ve loved for the Polo GTI to be a clan member but I’m sure we wouldn’t want to give it up for anything else. Next time, then.