On this year's World Motorcycle Day, read about Archana Timmaraju, a 36-year old Bangalore-based hearing impaired female motorcyclist who has not let her disabilities get the better of her. 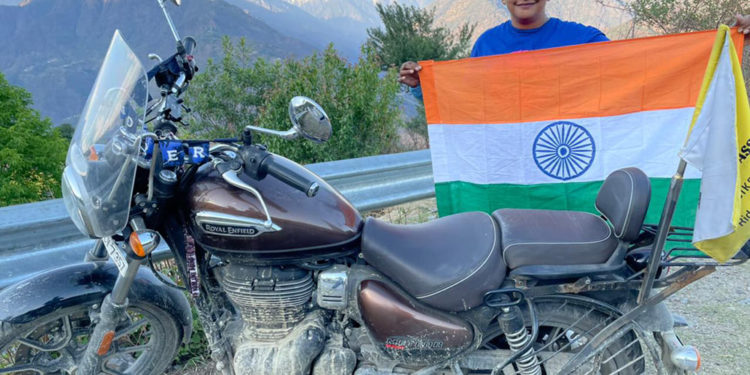 Amidst our busy lives and endless set of daily responsibilities, we often take for granted the fact that we came into this world with the gift of mobility and the ability to hear, smell, see and speak. We get restless when the internet stops working, or when the food delivery takes more time than expected. But realistically speaking, these are not even actual ‘problems’ – imagine being unable to do the most basic things such as walking or taking a shower on your own. According to the 2001 Census, there are over 21 million people in India suffering from one or more kinds of disability. One of them is Archana Timmaraju, a 36-year old Bangalore-based hearing impaired female motorcyclist who has not let her disabilities get the better of her.

Archana teaches art and metal sculpture at Aditi Mallya International School in Bangalore. More interestingly, she is also India’s first deaf and mute woman biker, known for completing an 8,400 km bike trip from Bangalore to Ladakh in 2018, accompanied by her colleague Daniel Sundaram. Starting off with shorter trips on rented motorcycles to the Western Ghats, Archana slowly made her way to long distance motorcycle trips covering over 40,000 kilometers till date. In 2018, she bought her first motorcycle – a Royal Enfield Thunderbird 350.

Earlier this year, in an effort to spread awareness on opportunities for people with hearing disabilities and raise awareness around women’s empowerment, Archana embarked on a cross-country motorcycle expedition from Bangalore to Uttarakhand and back, spanning over 25 days and covering 7000 kilometers. While the idea of such an expedition in itself can be quite intimidating, even for the most seasoned of motorcyclists, to pull it off in the midst of a horrifying pandemic certainly takes an immense amount of courage and confidence, especially for a woman who is hearing impaired. Archana completed the expedition on the newly launched Royal Enfield Meteor 350, a motorcycle built for long distance highway cruising. She was accompanied by Bharat Varsa, an IT Consultant by profession, who has more than a lakh kilometers of riding experience under his belt.

Born with only 40% hearing ability, Archana cannot fully hear the sound of motorcycles, but she can very well feel the vibrations that empower her with a great sense of equality and freedom. Archana is not deterred when she often gets told by others about the disadvantages of not being able to hear while riding. She rather chooses to keep a more positive outlook on the matter, saying that it does not make much difference to her as she can barely hear anything and is used to it like everything else in her life. Over the years, she has seen many raise eyebrows for being a woman rider, that too an impaired one in the so-called male-dominated travel space. Archana’s inability to hear has also partially impacted her speech, making it difficult for her to communicate with people during traveling, especially out of Bangalore.

All of these hurdles, however, have not been able to stop Archana from pursuing her passion for motorcycling and love for traveling. In 2018, hoping to prove that deaf women can also explore the world, she co-founded a company called Silent Expedition, which helps disabled people with travel and exploration opportunities. Through Silent Expedition, Archana’s aim is to motivate future generations and dismiss all the stereotypes regarding disability, especially disabled women. Much like any of us, Archana too eagerly awaits the end of the ongoing pandemic and for life to go back to normal so she could set sail on her dream expedition – a 650-day motorcycle tour around the world, covering 70 countries and 7 continents. Her aim is to spread awareness regarding sign language and also various forms of communication through this journey.