Upgrading the existing motorcycle engines to meet the BS4 compliance is the new rule imposed by Government of India – Accordingly all the manufacturers are updating their motorcycles by adding BS4 engine and AHO feature. Last week, we reported about Apache RTR200 with ABS FI getting spotted at nearest TVS dealership and TVS Motor Company has now updated its popular Apache RTR200 4V motorcycle to the latest BS4 Engine standard and AHO.

Two wheeler manufacturers in India are coming with the updated versions of their motorcycles to meet the compliance. TVS Motor Company today made an announcement that BS4 compliant Apache RTR200 will be available across India from 1st April 2017.

The new updates for Apache RTR200 announced by TVS Motor Company are restricted to only engine changes and does not include in any significant cosmetic changes. The all new 2017 Apache RTR 200 4V would be also getting AHO (Automatic Headlight On) feature, which is actually a part of the BS4 checklist. The addition of AHO means, there is going to be no headlight switch at the handlebar switchgear. 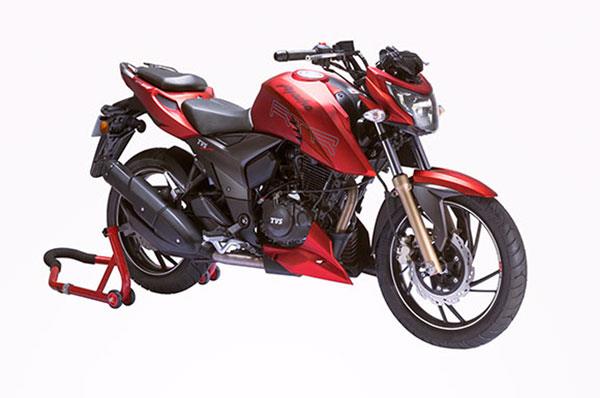 In the other hand, TVS Motor Company has not officially confirmed any details on the top-spec (Anti-lock Braking System) ABS-equipped, fuel-injected motorcycle to hit the showrooms across the country. Currently only TVS Apache RTR200 4V with carburetted version is available for sale in the market. TVS is also facing a tough competition from updated Bajaj NS200 and rectly introduced Yamaha FZ25. Launching the top-spec ABS FI variant of RTR200 should help TVS Motors in addressing the current market demand and stay competitive.