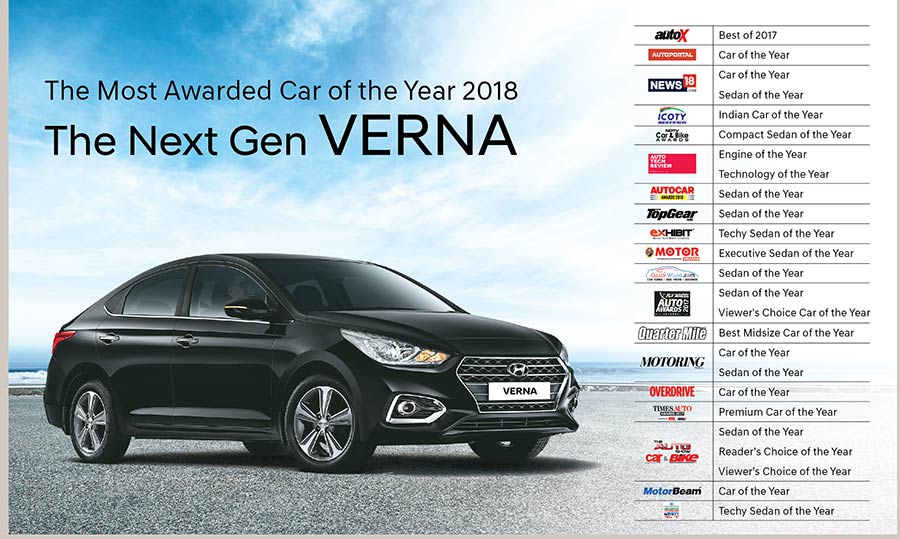 Hyundai Motor India Limited, the country’s second largest manufacturer of passenger cars and the largest exporter since inception, today announced the Next Gen VERNA becoming India’s Most Awarded ‘Car of The Year’. The Next Gen VERNA has won 25 Prestigious Awards including Indian Car of the Year (ICOTY 2018) in 2018.

The Next Gen VERNA is a game changer product and highlights Hyundai’s achievements in developing cutting-edge technology that encompasses exceptional engineering and design. We are honored as Next Gen VERNA has won 25 Awards from eminent Media Houses including the ‘Indian Car of the Year’ (ICOTY 2018). We thank our Customers and Channel Partners for Next Gen VERNA’s success in India and world markets. Winning prestigious awards are testament to our commitment to continuously bring-in world-class products with innovation and futuristic technology to Indian market.

The Next Gen VERNA has instantly become India’s most popular sedan due to a compelling blend of Futuristic design, Interactive technology and Best-in-Segment features. Its premium aesthetics, smart technologies and advanced Connected Car Technology- Auto Link makes it the most captivating car of the year.

Awards: The Most Awarded Car of the Year – Next Gen VERNA 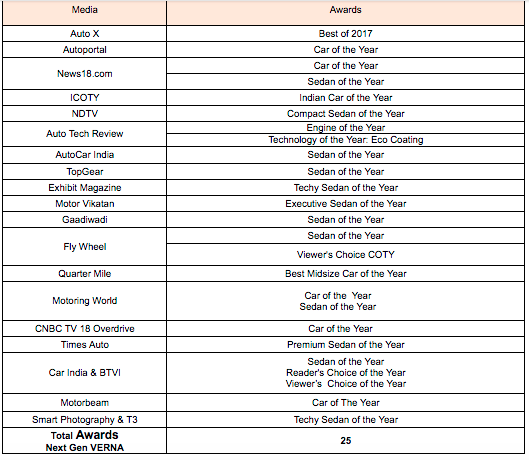 HMIL forms a critical part of HMC’s global export hub. It currently exports to around 88 countries across Africa, Middle East, Latin America, Australia and Asia Pacific. To support its growth and expansion plans, HMIL currently has 491 dealers and more than 1,304 service points across India. In its commitment to provide customers with cutting-edge global technology, Hyundai has a modern multi-million dollar R&D facility in Hyderabad. The R&D centre endeavours to be a center of excellence in automobile engineering.