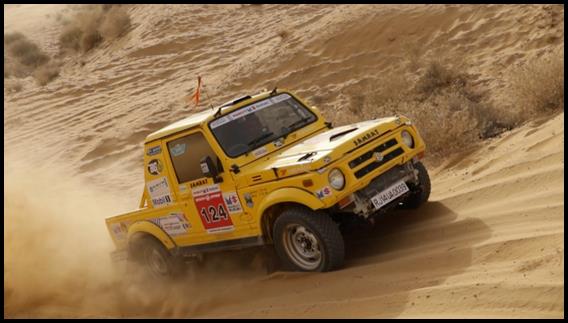 The second day of Maruti Suzuki Desert Storm 2015 came to an action-packed end. Starting from Jaitpur, a village near Sardarsahar, before the crack of dawn, the rally set off for Bikaner in the XTreme, XPlore, ENdure and Moto Quad category.

The route of the XTreme category was a mix of quick shifting sand and dunes allowing the cars to display a fine balance of zooming-high speed and balance on the grueling terrain of Bikaner. Steep turns, uneven terrain and slippery sand, ever ready to cave in under the speed, made today’s rally a difficult feat to achieve. Many cars got stuck in the sand while watching bikers lose control over the sand dunes was a common sight. Undeterred by the strong wind and the cloud of dust left behind in the trail of speeding cars and bikes, the enthusiastic locals hunched on the side of the tracks, rushed to the help of stuck vehicles and the drivers.

Suresh Rana’s exemplary feat of landing his momentarily airborne Grand Vitara safely on a steep sand dune made the gathered crowd go berserk with excitement. The full throttle deafening noise of the automobiles, the excited cheering and applause by the locals, gave the otherwise dry desert a very festive feel. Traversing approximately 350 kms during the day in the XTreme 4 Wheeler category, Suresh Rana, from Manali with his navigator Parminder Thakur clocked 5:30:34 Hrs in his Vitara to take the lead. Abhishek Mishra from Delhi along with his navigator PV Srinivas Murthy slipped to second position after getting a penalty of 3 minutes at 5:31:47 Hrs in the second leg of this power-packed event. Team of Harpreet Bawa and Ashwin Naik from Chandigarh were at third positon at 5:42:51 Hrs. With Suresh Rana, surging ahead at the first spot, the stiff competition between him and Abhishek Mishra is clearly evident by the difference in timing of 1:13 minutes.

In the XTreme category, vehicles covered a liaison distance of 343 kms and traveled through the sandy terrain of Jaitpur and Bikaner and will be proceeding to Jaisalmer from where the rally will navigate for the upcoming days. In the XTreme bike category, all the hopes are riding on CS Santosh, the only Indian to finish the Dakar rally, clocked today’s leg at 2:12:44. He was fiercely challenged by Jes David (2:36:36 Hrs) at the second position and Mohit Verma (2:45:13) and Vijay Parmar (3:05:45) who stood third and fourth respectively. Several bikes following each other in quick succession, leaving behind a storm of fine sand, made for an impressive spectacle.

The energy, speed and aggression of the bikes, left the crowd cheering for more. NDure motorists travelled through the same route as XTreme teams but in Time Speed Distance (TSD) format to complete the second leg of the challenge. Kolkata’s Somdeb Chanda and Neerav Mehta are leading with a penalty of 03:28 in their Gypsy while the team of Vishnu Singh of Jaipur and Adithya Anthony of Bangalore are at the second position with a penalty of 08:33 in their Vitara. Team of Kolkata’s Ajgar Ali and Erode’s Mustafa were at a penalty of 10:20 to make it to the third spot in their Vitara. Commenting on his performance at Desert Storm, defending champion in Moto Quad category and finisher of Dakar rally, CS Santosh said, “Both Dakar and Maruti Suzuki Desert Storm rallies are equally challenging in terms of landscape and terrain. As a motor enthusiast, it gives me immense joy to conquer the Thar Desert. Challenging as it may be, I am looking forward to the next stages of the rally”.