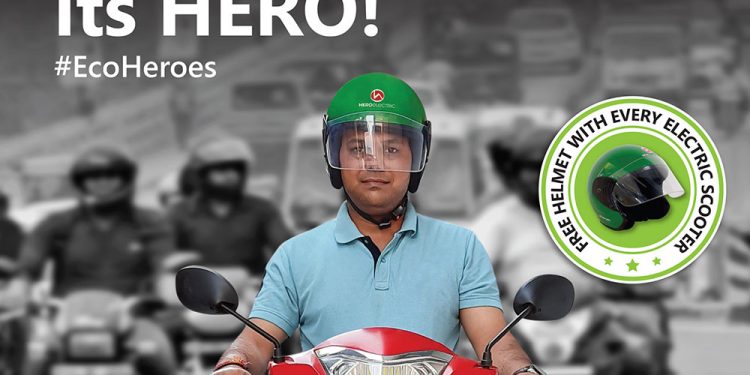 India’s biggest electric brand Hero Electric, today announced the commencement of its #CodeGreen initiative to highlight the importance of e-mobility in the conservation of environment. Hero Electric has begun this initiative in  coinciding with the ODD-EVEN campaign to increase awareness towards greener and cleaner ways of transport and assist the government in its efforts to curb air pollution.

Hero Electric has in past run many a projects to sensitize public on ill effect of air pollution. In the last ODD EVEN campaign more than 100 Hero Electric Scooters were deployed to give 18000 plus free rides to customers to communicate the importance of electric mobility in reducing air pollution. The recent campaign of giveaway masks at high visibility points to create awareness and garner public opinion on combating air pollution was also well received and appreciated.

The company has now worked out a unique campaign to create ‘ECO-HEROES’. Starting today, any customer who buys a Hero electric scooter will be handed over a special Green helmet along with a personal message from the company acknowledging the contribution the customer has made to the environment. The company intends to use the Green helmet riders as ambassadors to further drive the message that everyone deserves to breathe in clean air including the future generations.

We all keep talking about our worsening air quality yet only few do something about it. The helmets are a symbol of this cause. We believe that every person contributing towards the environmental conservation is a Hero – an Eco Hero, and a Hero deserves to be seen, and there’s no better way for that than for him to sport a bright green helmet amidst the sea of black and grey.

Every time one uses an electric scooter, one contributes a tiny bit to a better environment and that’s what the code green is about. CODE GREEN aims to celebrate the users of Zero Emission, Zero Fuel, Hero Electric Scooter and be seen as the Hero they are and what better way to stand out than be seen sporting your contribution in a crowd full of grey and black.

Today, a small movement, but every small movement is tomorrow’s revolution. CODE GREEN is that initiative which aims to drive the spark in the tinderbox that is the ever-growing problem of pollution and reach every mind & soul in this country of ours.

Hero Electric is the pioneer of electric mobility revolution in India, and with initiatives such as the odd-even scheme, we want to help the government reach out to as many people and spread the awareness against rising air pollution in India. The Hero Electric #CodeGreen project is aimed at sensitizing the audience about the adverse effects of air pollution and bringing a serious change in the environment.

In order to help the government in the fight against air pollution, Hero Electric is addressing the pressing issue of bad air quality in the Indian cities with its extensive program #CodeGreen. Leading the change by sensitizing the audience about the adverse effects of air pollution, the company believes that a collective effort and awareness around environment preservation is the need of the hour.

According to a WHO, the air quality in Delhi, is the worst of any major city in the world. Motor vehicle emissions are one of the major causes of air pollution and as much as two-third of deaths from air pollution in India can be attributed to exhaust emissions from these vehicles. The odd-even initiative is aimed at controlling the number of vehicles running in the city to reduce toxic levels of the air, and Hero Electric, with its #CodeGreen initiative, aims to aid the government to further amplify the movement against air pollution in the country.

India is the largest two-wheeler market in the world, and therefore, even a slight increase or decrease in emission can have a massive impact on the country and the world in general. As a company, Hero Electric has worked towards ushering India into an era that adopts a cleaner, greener and sustainable way of life. Apart from leading the green mobility revolution in India by being the market leader in the E2W market, Hero Electric has also contributed to the preservation of the environment by its nation-wide campaign inspired by The United Nations (UN) mask challenge on World Environment Day this year. The employees at Hero Electric took a pledge to #SwitchToElectric and joined UN’s movement to beat air pollution and planted trees, cleaned roads and handed out face buffs to people at key locations across the country to foster an eco-conscious growth.

Hero Electric will continue to innovate in this space and lead electric mobility in the country. Hero Electric plans to take the 615 touchpoints presently to 1000 by end of 2020 and make the brand accessible even in the most interior parts of the country. The company has aggressive investment plans in the next three years to ramp up production capacity of its electric scooters to 5 lakh units annually, with a focus on low-speed scooters for last mile connectivity.