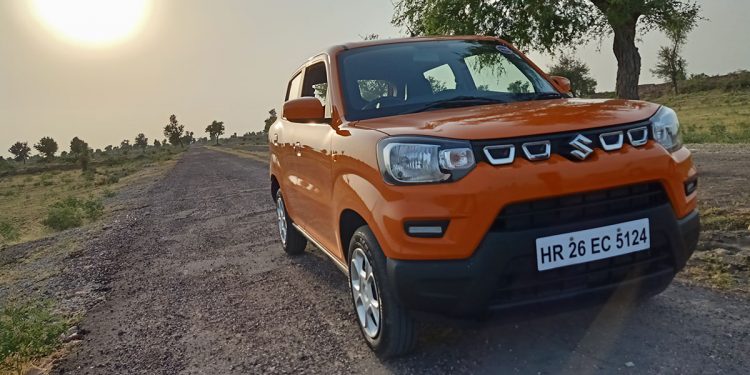 The Alto is no longer the king it once was and the reason is that people in the market for an entry level car are simply stretching their budget and getting a better car. Being basic is no longer an option and even at the entry-level being desirable and gelling with the target audience is important. Just fuel economy is not enough.

Meet the Maruti S-Presso and the name is perfect as it is for the youthful demographic and is poised as an entry-level car or the ideal first car for many. Plus Maruti says it is not a hatchback at all as it is a mini SUV. So is it an SUV or a hatch?

The S-Presso is an unique looking car and is a hybrid of sorts between a hatchback and SUV. Size wise it is compact with a length of 3.56m in length, 1.53m in width and has a very good ground clearance figure of 180mm.

The suv design is most seen at the front with the upright stance with the headlamps being connected with the grille. It is bold and you also see the big wheel-arches which have 14inch wheels (no alloys). Plus the added black cladding below adds to it.

The side and rear are less successful with the side having a boxy look and the rear reminding of the Alto with the same tail-lamp design. Do note the accessories list has alloys and other bits which makes it look much better.

The interiors are quite futuristic and the first thing is that you will see the instrument cluster being positioned above the centre console with a massive round shape along with ac vents by side. Below are manual AC controls while the steering looks like it’s been borrowed from the Ignis along with a fairly sophisticated instrument cluster.

Quality for the price is good and a jump over the Alto. It also looks funky and the orange accents plus the design of vents and all have a premium look. Space is like the Wagon R (Read: Wagon R Review)and that is impressive with the boxy looks giving that excellent headroom at the rear with enough legroom to make anyone tall comfortable.

Legroom is good too and while three might be an issue due to the width, two is enough. The boot is big enough for the price though storage is hampered by lack of rear door pockets and storage places at the rear plus the glove-box is small too.

You get a 7-inch touch-screen infotainment system and that is the same as the one on the newer Maruti cars. Thus the touch-screen is easy to use and the graphics are good.  It has Apple Carplay/ Android Auto plus you can use your phone to use navigation. You also get rear parking sensors, steering controls, voice recognition etc while in terms of safety you have dual airbags, ABS with EBD, seat belts with pre-tensioners, driver/co-driver seat belt reminder, rear parking assist system plus reverse parking sensors. However rear power windows would have been great.

The S-Presso gets a 1.0 litre petrol engine which is BS6 compliant and develops 68 bhp and 90Nm. However we think it is the best 1.0 petrol. At start it is refined and on the move it is smooth with barely any vibrations. It goes off smoothly and drives very well in traffic. The AMT version is excellent for city traffic and amongst the smoothest yet from Maruti with hardly any jerks while the pause between the shifts is much lesser now.

The manual is the more fun but with a very light clutch and a slick gearbox, it is also a very easy to use car. As a whole the S-Presso is quick on its feet and the fact that you sit higher enables you to have a better view of the road ahead.

In the highway is when pushed hard the engine groans a bit and the AMT gearbox is a touch slow for overtaking and that instant punch though the manual mode in the AMT is much better to use if you want to go quicker.

Its ride and handling is much better from the Alto and comparable to Kwid but we like the low-speed ride quality of the S-Presso more here. In terms of mileage we got 17-18 for the AMT and near 21 kmpl for the manual!

The S-Presso has the Renault Kwid, Datsun Redigo and of course its own siblings as rivals. The S-Presso and Kwid are more rivals while Altos and Redigo are much cheaper. The Kwid is also available with an 800cc engine while the S-Presso is not.

The Kwid range starts from Rs 2.8 lakh and goes till Rs 4.8 lakh. The Redigo is Rs 2.7 lakh to Rs 4.3 lakh. The S-Presso has the better AMT and the engine while the Kwid to many would look better.

Avoid the base variant and instead look at the top-end VXi and the VXi+ for best features and value.

The S-Presso is a very good effort and while some many not like its looks, the thing is that it offers many things its segment does not. It has the best engine plus it is BS6 along with good features and space. It is very good value and we recommend the AMT version. It might just be the best sub-5 lakh car right now.