The film "Bertha Benz: the journey that changed everything" is dedicated as an inspiration to all women and men on International Women's Day on March 8.

The Mercedes star is now shone on the woman without whom the company would perhaps never have existed in this form: Bertha Benz. To mark her 170th birthday on 3 May, Mercedes-Benz relates Bertha’s historic long-distance journey in cinema quality, thus encouraging men and women throughout the world to make their visions come true with courage and self-confidence. The film “Bertha Benz: the journey that changed everything” is dedicated as an inspiration to all women and men on International Women’s Day on March 8.

“It was important to my team to depict Bertha Benz as a strong woman and timeless role model” explained Bettina Fetzer, Vice President Marketing Mercedes-Benz Cars. “Bertha was a pioneer and our first test driver. Her courage and her will not to give up too easily inspire me very much. With our film we want to motivate people to go through life with a similarly positive, hands-on approach and to tackle challenges with confidence.”

The decision by Bertha Benz to draw public attention to the invention of her husband Carl by undertaking the first long-distance car journey to Pforzheim covering nearly 100 kilometers now lies more than 130 years in the past. Nonetheless, her courageous act is more topical than ever, as visions, determination and belief in oneself still remain important success factors in today’s mobile world. Which makes Bertha Benz the best role model for present day pioneers in all areas of life.

“She was more daring than I,” Carl Benz said about his wife. As the inventor of the automobile, he revolutionised the mobility of the 19th Century. This success that changed the world would have been barely conceivable without Bertha Benz, her indomitable optimism and her ability to find a way out of difficult situations. When the public were still sceptical about the new horseless carriage that was moved by “mysterious” forces, she took a snap decision and embarked on a then rather difficult journey to Pforzheim with her two sons Eugen and Richard. Also on board was a firm belief in her husband’s invention and in herself.

This story is emotively recounted by Mercedes-Benz in a four-minute film, “Bertha Benz: the journey that changed everything” – in which the legendary first filling station in the world also plays a part. The European lead creative agency Antoni Garage was responsible for the film’s production. The production firm is Anorak Film. The director was Sebastian Strasser and Alice Bottaro was involved as a Creative Director at antoni.

Based on the homage to Bertha Benz, five women from widely different areas at Daimler asked themselves the questions of what impressed them most by Bertha Benz, what professional challenges they face personally, what tips they would like to give to young women starting their careers, what importance success and failure have at work, as well as what their personal mottoes are. You can find the entire conversation online at Mercedes me media.

Renata Jungo Brüngger, Member of the Daimler AG Board of Management for Integrity and Legal Affairs, sees Bertha Benz as a trailblazer for the mobility of the future: “She knew that things have to be tackled with a positive attitude, even though success is not guaranteed from the start”. Juan Zhou, Head of Public Relations and Communications at Beijing Mercedes-Benz Sales Service Co., Ltd., wholeheartedly agrees with her in this regard: “It is not always easy to determine where the professional journey is heading. It doesn’t do any harm to be open to new things.” For Britta Seeger, Member of the Board of Management of Daimler AG, responsible for Sales Mercedes-Benz Cars, the team is the key to success: “For me it’s important that in the team we get to the heart of things, make decisions and progress fast. Above all I find it important to be approachable and authentic: I let my team in on what I am thinking and feeling.” Together it is also easier to deal with failings, of this Adi Ofek, CEO of Mercedes-Benz Research & Development Tel Aviv Ltd, is sure: “Life is about learning. About personal development. One usually learns from past errors”, she adds. “Precisely because no-one wants to fail, it is all the more important.” The personal motto of Susanne Hahn, Director Lab 1886 Global, on the topic of success is: “Innovations and success are best experienced with others, and together they are much more fun.”

Back in 2015, Mercedes-Benz already launched the initiative “She’s Mercedes” to address women specifically and arouse their enthusiasm for our brand. Today women in more than 60 countries can exchange views in online communities and at networking events, and be inspired by the world of Mercedes-Benz and its brand activities. Participants in this year’s South by Southwest® (SXSW) can experience communication in person and networking at the She’s Mercedes Networking BBQ together with EQ, the new product and technology brand, on March 11, 2019. Several panel discussions and workshops will invite women to obtain an insight into the She’s Mercedes initiative and the EQ brand, and to discuss topics such as personal and professional development with well-known hosts such as the US singer and songwriter Beatie Wolfe and MGM Vice President Beverly Jackson. More information about the initiative is available on the new LinkedIn channel of She’s Mercedes.

The specific furtherance of women is also a major goal within the company. The proportion of women in managerial positions within the group is to increase to at least 20 percent by 2020. Measures adopted to further female managers include mentoring programmes, special events and training courses, and employee networks.

Live experience: the life of the mobility pioneer as an audio play

To mark the birthday of Bertha Benz, her life and work will also be celebrated by the Mercedes-Benz Museum. From 3 to 5 May 2019, the live audio play “My dream is longer than the night” about the life of the mobility pioneer Bertha Benz will be performed in the Casino of the Mercedes-Benz Museum. The production based on the novel by Angela Elis can be seen in two evening and two family programmes both on the 170th birthday (May 3) and on the 75th anniversary of Bertha Benz’s death (May 5). 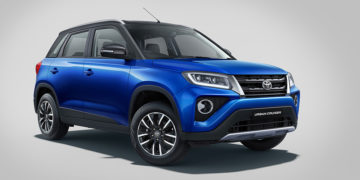 Toyota Kirloskar Motor today announced that the company sold a total of 13,003 units in the month of November 2021, thereby registering a 53% growth over...