by Nikhil Thorvat
in Bikes, Mahindra
1 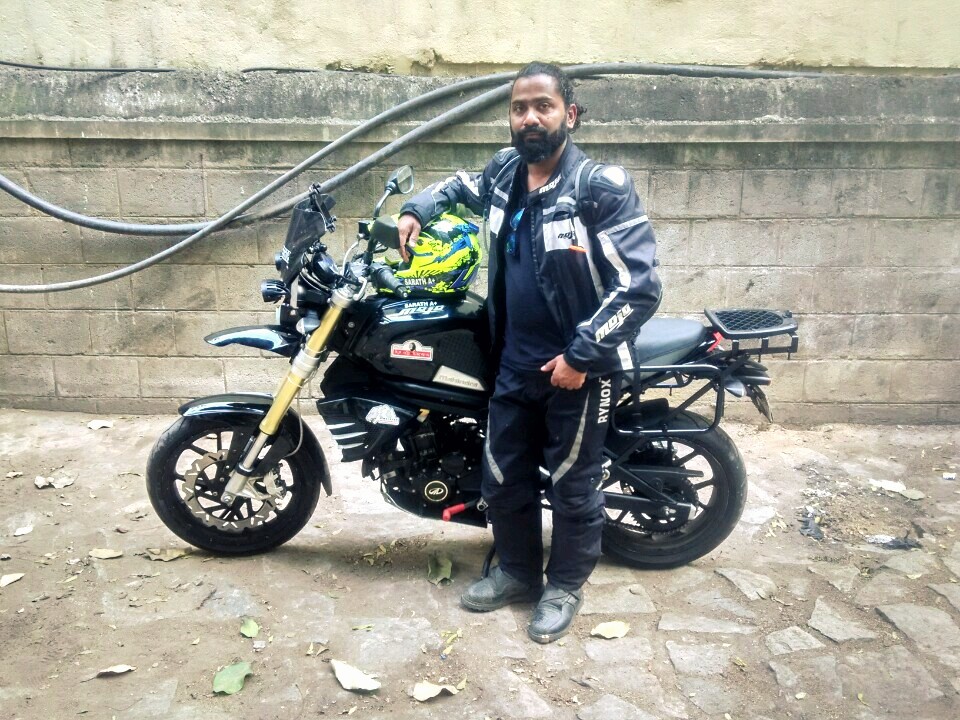 Mahindra gave us an opportunity to interact with Sarath Shenoy, who will be leading the upcoming Mahindra Mojo Desert Trail which will commence on 17th December and conclude on 25th December 2016. Sarath has been a part of Mahindra and other MOJO trails as well. Speaking about Sarath,  Sarath has ridden his MOJO for more than 50,000 kms and knows in and out about this incredible machine. Like every other motorcyclist, he keeps his motorcycle close to his heart. Sarath completed one of the toughest motorcycling events in the world, 18th Raid de Himalaya securing 4th place in the Alpine class and a 7th place overall with his MOJO whom he calls ‘KARTHYAYINI’. This was first for both Sarath and Mahindra to take part in the event and finishing it on a high is something to be really proud of. We  at GaadiKey were eager to meet and learn about the experiences of whom Mahindra calls the ‘MOJO Baba’. 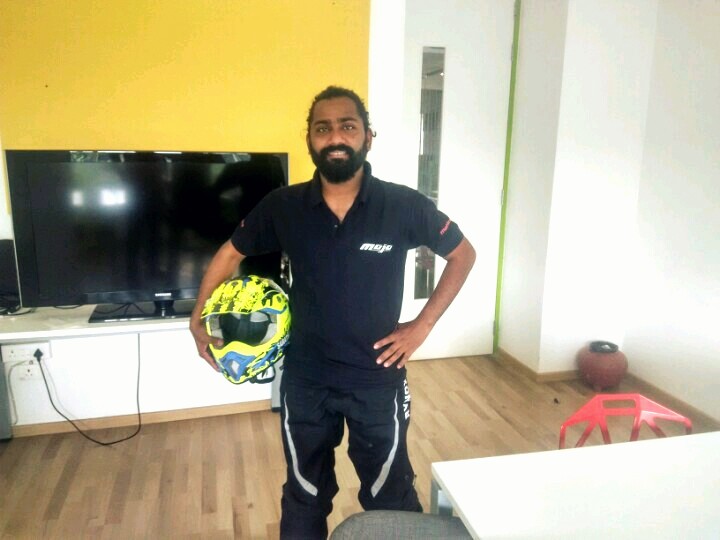 GaadiKey: Since how long have you been riding and for how long are you associated with Mahindra?

GaadiKey: What does Motorcycling mean to you and what changes has it brought in you?

Sarath Shenoy: Motorcycling means the world to me. I would never stop riding a motorcycle my entire life. Motorcycling is a religion only people on two wheels would relate to. It creates a sense of distress and calmness when you travel on two wheels and that is something you can never experience on anything else in the world, at least not for me. Every ride you go on, every place you travel to will create a change in yourself. You wouldn’t know it at that point of time but it definitely would’ve brought about change in the inner you. Motorcycle travel has made me transform into a better person. I am a calmer person than i was before. When you are on a motorcycle, its just you and your motorcycle and nothing else in between. This is what let’s you explore about yourself and what you can do to keep yourself going. This ultimately makes you stop worrying about little things in life for making you a better you.

GaadiKey: What made you to be a part of Mahindra?

Sarath Shenoy: I was always a motorcyclist and before being a part of Mahindra, i used to work for corporate companies and somehow made time for my rides. There used to be times where i had to shift companies because the time i would spend on my motorcycle and the holidays i was given to do the same weren’t enough. After a lot of juggling with companies to manage my work schedule as well as do what i love is when i thought i should really follow my dream and decided to quit to be a part of Mahindra. I have never looked back and i am happier than ever.

GaadiKey: Tell us more about the Desert Trail and why is it so special?

Sarath Shenoy: Desert Trail starts on the 17th of December in Jaipur and will conclude on 25th December in Ahmadabad.  The complete Trail will cover about 2300 odd kms and the riders will get to experience riding their MOJOs on different terrain and learn more about what their machines can do. Desert Trail is very special because we will be riding around the most beautiful places around India and get to experience places like the Sam San Dunes, Jaisalmer fort, Tanota Mata Mandir (100yr old temple near the Indo-Pak border), Uttarlai (first underground military base in India), ride through the Rann of Kutch (which which is a salt marsh covering a huge area of around 10,000 square miles) and a lot of other beautiful places. Riders will also experience great comfort with hotels and the activities Mahindra has planned for them. 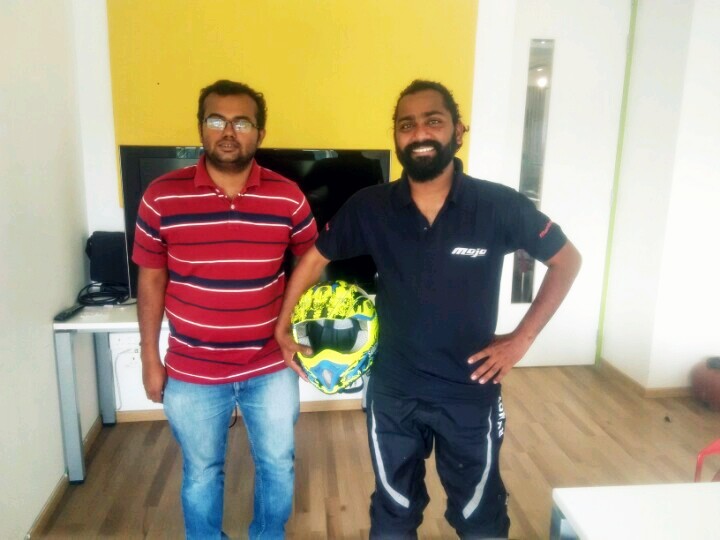 GaadiKey : What measures have Mahindra taken to ensure the safety of the riders and their motorcycles during the Trail?

Sarath Shenoy: We have a dedicated team which includes a doctor, who will accompany us on the Desert Trail. We will have a back up van which will be following us throughout the ride and will take care of the riders and their motorcycles in case of a breakdown or a medical emergency. We have advised all the riders to wear protective motorcycling gear throughout the trail and Mahindra have also made arrangements to provide for those who fail to get it. We have a unique rider formation which we will be following to ride throughout the Trail and one rider or two riders and a mechanic from Mahindra will be riding with puncture kits and tyre pressure pumps to fix punctures or minor issues with the motorcycle and move on.

GaadiKey : How may riders are taking part in the Desert Trail and what parts of India do they come from?

Sarath Shenoy: There will be a maximum of 25 riders taking part in the Desert Trail and they come from all over India. We see entries coming from the North East part of India, a couple of riders from Chennai and other major cities of India.

GaadiKey: Where can we expect the future trails of Mahindra to be?

Sarath Shenoy: We are planning of having more trails in the future as well and i don’t think we’ll ever stop. I have been a part of all other Trails conducted by Mahindra and its really a great experience for me to be riding with a huge lot sharing the love for motorcycle travel together. We will be planning on having a North East Trail which might include crossing boundaries as well. Well, i’m still not sure of that for now and we will let you know about it in the near future.

Sarath Shenoy: These experiences and engagement will prove to be a great help for customers to know and learn more about their motorcycles and also maintain a good relationship with Mahindra. We have seen an increase in the entries for the Desert Trails compared to the previous Trails and i believe this is a real advantage for Mahindra to improve their customer relations and support. Riders give in feedbacks about their bikes and if they would like a change in the MOJO and Mahindra honestly takes in the inputs and try to change tiny bits of the MOJO. The recent change was seen as Mahindra launched the MOJO as a tourer edition with fog lamps and saddle bag support racks so yeah, customer interaction helps a lot. 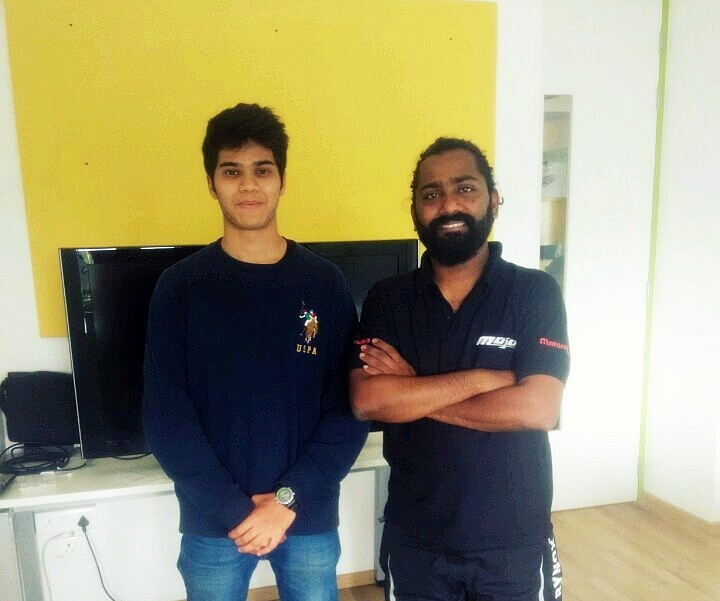 And this is where the formal interaction ended and i, myself being a motorcyclist asked him about his experiences and shared mine and then started having deep conversations about motorcycling which went on and on and on. We were lucky enough to meet his partner in crime, KARTHYAYINI (that’s what he calls his motorcycle). What a beautiful looking machine (karthyayini) and what an incredible person to talk to (Sarath). Wishing him and his team good luck for the Desert Trail and many more Trails to come. 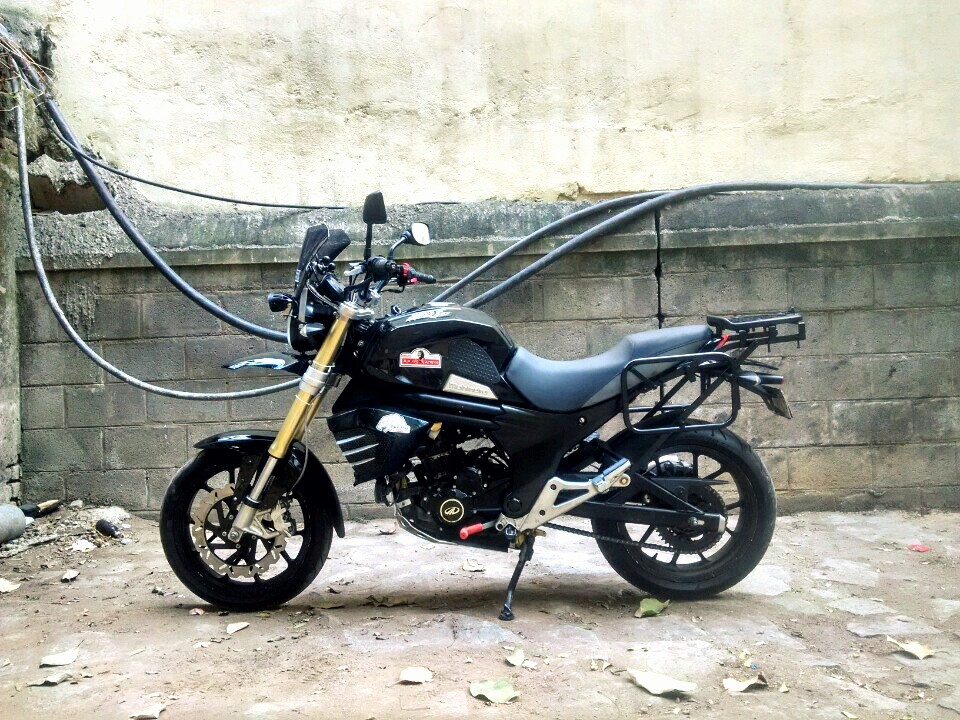 To know more about what we spoke with Sarath, write to us at reach@gaadikey.com

EagleRider India to embark on a journey around the world, “Big Motorcycle Ride”