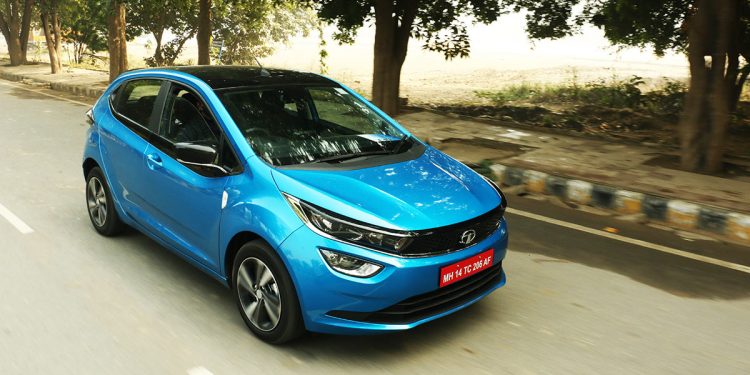 Tata Motors launched the Altroz premium hatchback last year and since then the car has been a decent success with steady sales all throughout the year. The looks and the safety record thanks to the 5-star rating played a big part in that. However later in the year saw new competition coming in form of the Volkswagen Polo TSI and the new Hyundai i20.

The Polo TSI was now available with a manual gearbox plus a more affordable price-tag while the new i20 came storming in to this segment with new features and lots of engine/gearbox options. Tata Motors has responded with the new Altroz iTurbo. This is the turbo petrol version and it will sit along with the 1.2l standard petrol plus the diesel of course. But before that, let us glance through the other changes.

The Altroz is a very good looking car no doubt and Tata has not added in any body kit or changed the alloy wheels or even any strips. The iTurbo is just another variant but there are some new things added. There is a new Harbour Blue color and that when paired with contrast black roof plus mirrors, looks fantastic plus gets plenty of attention. This Contrast Black roof option is also available in XZ variant and of course the XZ+ variant of Altroz/ Altroz iTurbo. Overall the Altroz with these changes looks even better now.

Inside the design stays the same as the standard Altroz with a sporty steering wheel and a nice interior design lay-out. There are some changes like a new dual-tone interior colour scheme with black and light grey while there are new leatherette seats. This is a part of the new XZ+ variant and that is the flagship trim now in the Altroz range. The space is also good while a flat floor makes it easier to put three passengers though the width is not the best.

There is a new voice command feature which understands Indian accents with 70 commands. Also it has the “What 3 words” technology that has assigned each 3m square in the world with an unique 3 word address. Also it has Xpress Cool feature which cools the cabin quickly. Oh and also there is a Harman audio system with 2 additional tweeters from the other Altroz variants.

The main talking point of the Altroz iTurbo is of course the engine and that is a 1.2litre turbocharged three cylinder petrol which develops 108 bhp and 140Nm of torque. That is a big step up from the 84 bhp and 113Nm of the 1.2l petrol without the turbo. While a DCT was rumoured to be launched, there is only a manual available for now. It is a 5-speed manual but along with the City drive mode, the iTurbo now also gets a Sports mode for better throttle response.

There is an advantage for a turbo petrol in terms of its low-speed responses and of course the addition of torque at lower revs. The Altroz iTurbo has its 140Nm available early which means you are downshifting less. 3rd gear is sufficient for city use and the turbo petrol engine makes driving in the city less stressful. This petrol engine is more relaxed than the 1.2l without the turbo.

When you first push the start button there is some vibration which remind you that it is a three cylinder but it settles down early. We will say that this engine is slightly smoother and has a better power delivery than in the Nexon petrol.

Post driving past few rpms, in the city, you will notice the wider power band and how much quicker the Altroz feels now. There is no doubt that the Altroz iTurbo is now a fast car with a 0-100 km/h time of under 12 seconds.

The engine also feels faster and better the quicker you go with the turbo coming into full effect. When driving in the highways, you will enjoy the Altroz iTurbo more as this engine comes alive and basically you can easily drive at 100 kmph plus speeds all day. The gearing is nice and it does not feel like it lacks a 6th gear.

Key talking point in the Altroz iTurbo is the Sports mode now in the Altroz. That modes makes the car  quicker and we recommend using it all the time. Response when you press on the accelerator is instant and it is fun driving the car in this mode. There is City which is suited for economical driving with les s sharper throttle response. In terms of mileage we got 12-13 kmpl and due to less frequent gearshifts, the iTurbo Altroz actually might have better mileage over the 1.2l non turbo Altroz.

We will make some points regarding the manual gearbox as the shift quality could be better as the 5-speed manual feels a bit long to use and slot gears. For such a sporting car the gear shift could be better. In terms of ride and handling the iTurbo we feel is a bit sportier as the suspension is slightly stiffer. The ride is a bit firm over the really bad roads but the handling feels tight along with a positive feeling steering (heavy at higher speeds, light at low speeds). Compared to rivals the Altroz iTurbo has a heavier steering along with a sportier handling.

There are two rivals to the Altroz iTurbo and that is the Volkswagen Polo TSI and the Hyundai i20 Turbo. The i20 from Hyundai is more expensive and powerful in Turbo form but does not have a manual since it has only an iMT and a 7-speed DCT automatic. The i20 is more feature packed and premium while the engine is tuned for better use-ability. The Polo is the more hardcore driver’s car with a manual gearbox and matches the Altro iTurbo well since it also has a manual gearbox. The Polo TSI is priced between Rs 8 to Rs 9.6 lakh. We expect the iTurbo to carry a premium with around a lakh more from the 1.2l non turbo model.

If you are confused regarding whether you should buy the Altroz iTurbo or save the money and buy the standard Altroz, then do not be as the iTurbo Altroz is easily the best Altroz since the turbo petrol engine is simply much better. You have an easier drive in the city while it is much faster along with also an increase in efficiency when driven sedately. The extra features and the new flagship trim also makes the Altroz a much more desirable car. For space, features and performance plus value the Altroz iTurbo is a very good choice.