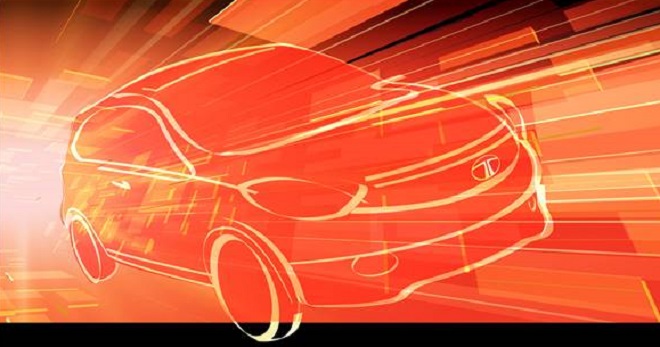 Tata Motors is going to unveil their upcoming hatchback Tata Kite in the first week of December. “Tata Kite” is actually the codename of the hatchback – and it is all set to be launched in the first week of December. Soon after Tata Motors made Lionel Messi as its global brand ambassador, the Indian car manufacturer, Tata Motors, teased their upcoming new small car in one of its promotional video that featured the football ace Lionel Messi. The upcoming Tata Kite hatchback is going to take on the likes of current market leaders in the segment like Hyundai Grand i10 and Maruti Celerio.

The second teaser revealed by the company is a complete sketch of the hatchback. The released Kite sketch provides us a good hint what the carmaker has in its store for Tata Kite. The youthful design as seen in its rival Maruti Celerio is going to be taken into Tata Motors’ core design DNA. The iconic smiley grille with humanity line is retained but the headlamps and bumper of the car gets more sharper.

The released sketch reminds of the Tata Indica eV2 with which it shares the platform. The sheet metal design and day light opening provides a very modern appeal to the car. The rear fascia of the car ditches Tata Indica’s mundane X-Mas tree combination light setup in favour of a very simple conventional design. You could expect a chrome applique on the hatch door.

The Spyshots that were recorded earlier revealed a fresh interior design with a neat centre console as well as the Zest-derived multi-function steering wheel. The all new Tata Kite is expected to retain Tata Indica’s spaciousness.

[…] – one, in the TV commercial featuring Football ace Messi, and the other in one of the sketches released by the company. The global unveil of Kite is scheduled to happen on December […]