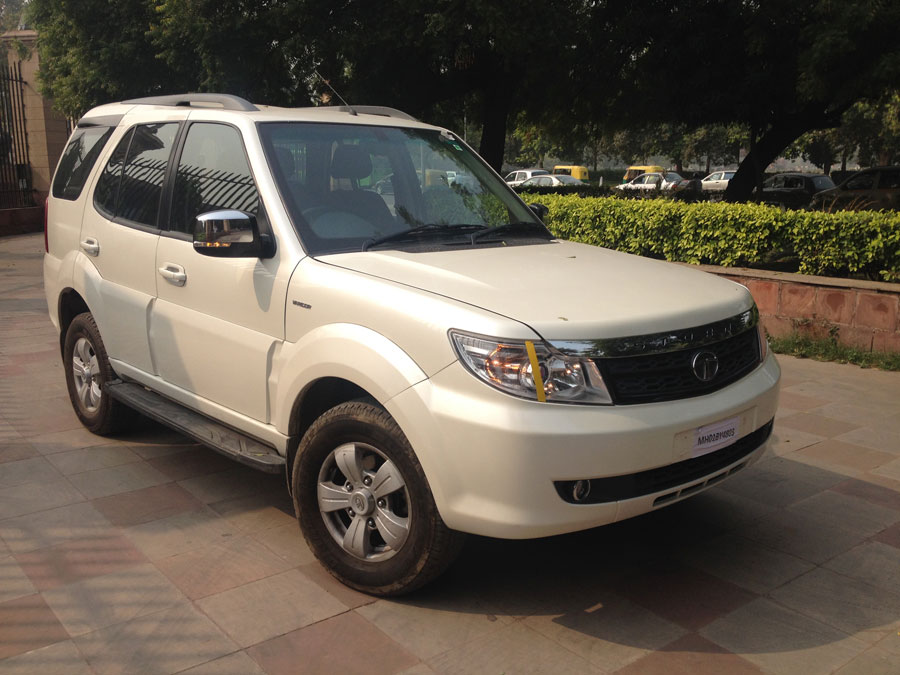 The Tata Safari Storme VX (rwd) here reviewed has a sentimental attachment to me. Its late ancestor, the Tata Sierra was an integral part of my late teenage and early college years and was witness to my many (mis)adventures. The Tata Safari thereafter was introduced and has since been subject to a fair few improvements over the years, to finally reach its latest and unquestionably, its greatest form, in its remarkably long product life cycle. The latest improvement comes through as a 10bhp (148 bhp peak horsepower@4000rpm) increase to its 2.2 litre VARICOR diesel engine amongst other minor cosmetic tweaks, and what follows in my weekend impression of the Storme. 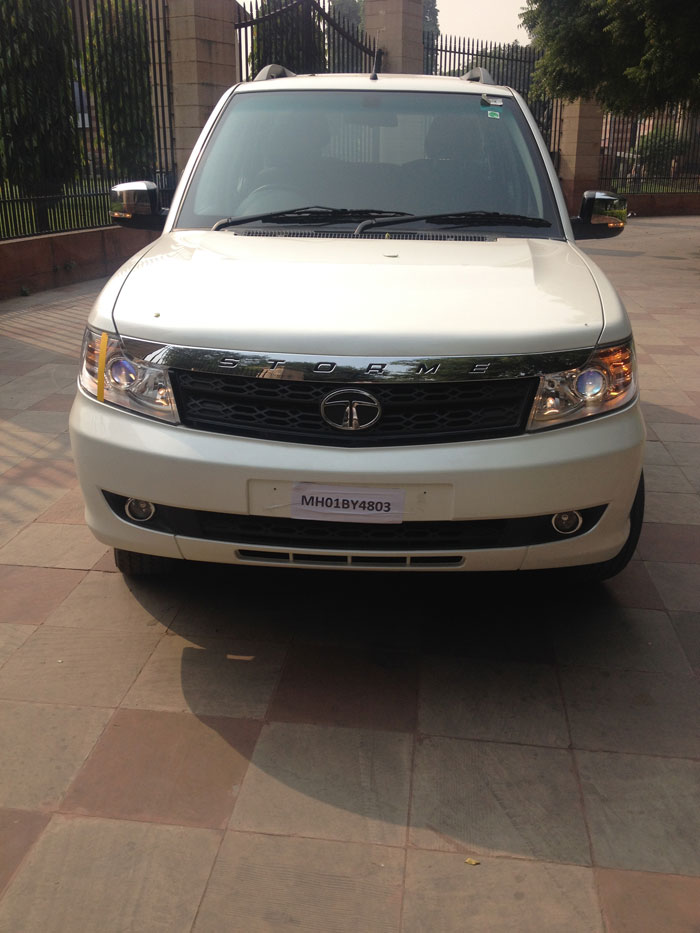 The Safari has retained its basic external sheet metal design since introduction in the late 90s with minor cosmetic changes through the years. The latest, the Storme variant has a significant chrome addition to the face and a strip through the back along with a new Discovery style grill and headlamp unit. In my subjective view, the Storme though not classically good looking and a bit ungainly and inefficient in its dimensions, somehow still manages to look attractive and enjoys incredible road presence. 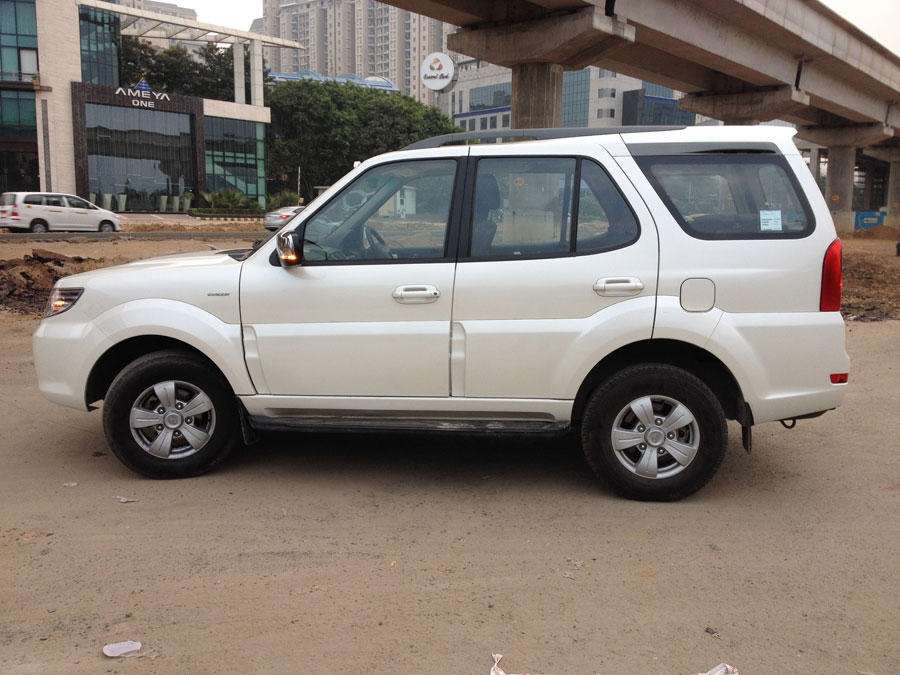 The Storme is built like a tank and weighs nearly the same at nearly 2 tonnes, however the door action is easy on the arms and handle levers are robust and light in use. The general standard of fit and finish is acceptable, though still behind its competitors. The cabin switch-gear is good to the touch and functions well, though the dashboard is an odd mix of good and crude (especially the air vents) quality plastic. The air-conditioner on the Storme is extremely effective and provides the all important rear passengers immediate relief through dedicated air vents along the roof and front passenger central armrest housing. 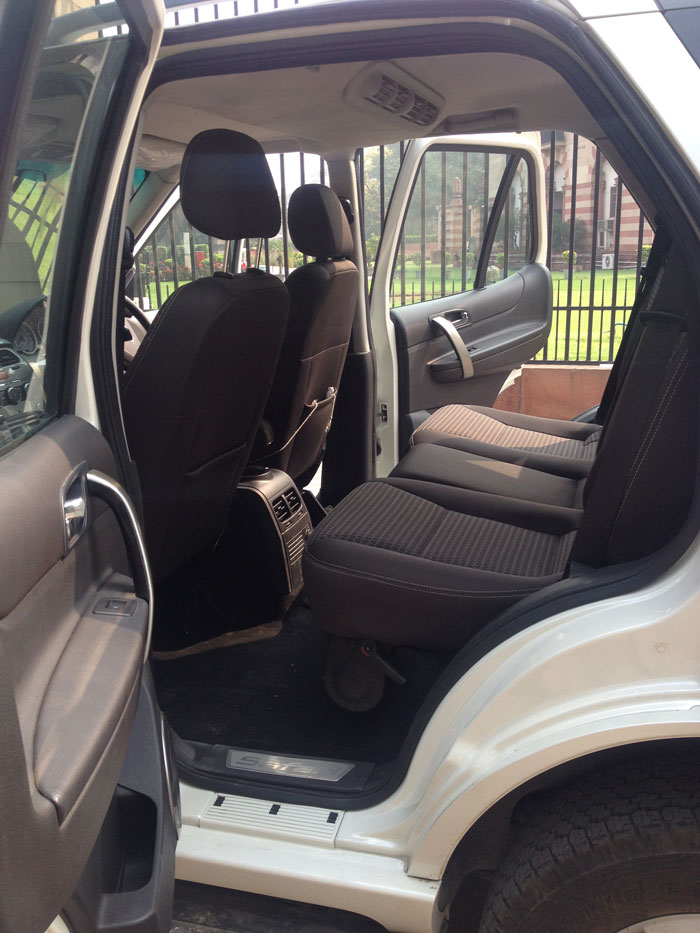 Dark fabrics used for the seats and cabin in general are quite smart and go with the overall aesthetic theme of the cabin as improved by the colours used for the dashboard plastics. The Storme seats 5 is absolute comfort and the seats themselves are well padded and very comfortable for long journeys and motorway cruises. The Storme also features two fold down seats in the boot (which is quite large and further increased by split/fold-able second row seats) but that is best used by small children and if you must, then for average size adults for short journeys. 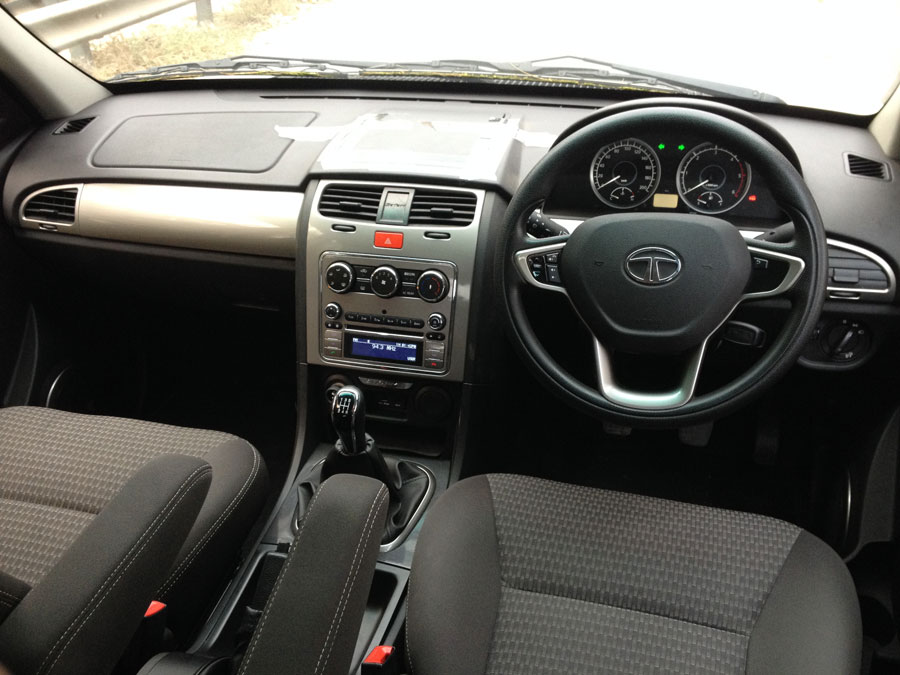 The high ground clearance of 200mm and weight (nearly 2 tonnes) just road rolls everything in its path. Over poor and bad road surfaces, bumps and thuds do filter through marginally to the cabin but not at an annoying level or any worse than its competitors. However the Storme does pitch and roll quite a bit due to its height, weight and tall boy stance, requiring careful inputs to the wheel when changing directions in a hurry or at speed. The steering is quite heavy despite being power assisted, possibly to keep the Storme honest given its dimensions and the law of physics it constantly smothers. However on the move and even at speed, the Storme is quite well planted, provided not much is demanded of it in a hurry. The steering wheel is comfortable to hold and pleasing to the eye, which in the VX trim comes with integrated button for audio (an upgraded Harman unit with good sound though limited functions) and phone functions. The large rear-view door mirrors provide good coverage and parking is greatly assisted by reverse parking sensors (though without a camera). 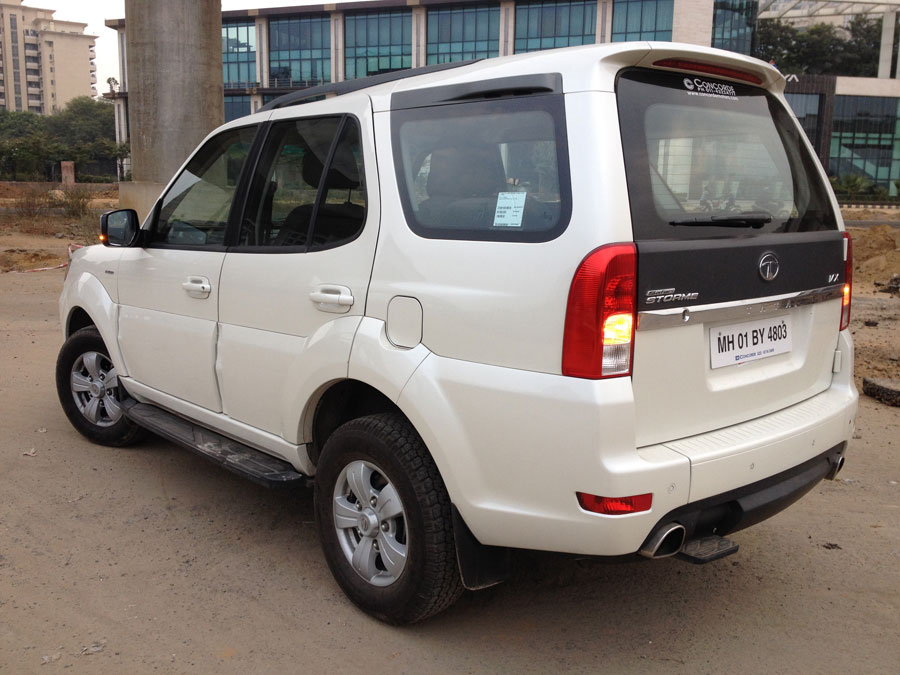 The Storme in the VX trim rides on 235/70 R16s and comes equipped with disc brakes on all four wheels(alloys in VX trim) along with ABS and EBD. The braking performance in the real world is good and reassuring, though the hand brake lever feels a bit flimsy for the weight it checks. An additional safety (and ego massaging) feature that is now a part of the Safari folklore is the unparalleled driving and seating position in general that is offered, assisted by the large glass area for good all round visibility. What is even more remarkable and possibly an unnecessary feature is the driver’s seat height adjustment lever, as I found the Storme seating a touch too high, even though I am quite short in height. For further safety, in the VX trim, the front passengers also get airbags and powerful headlamp effect for bullying lesser objects out of the way when hurrying to an all important farmhouse party. 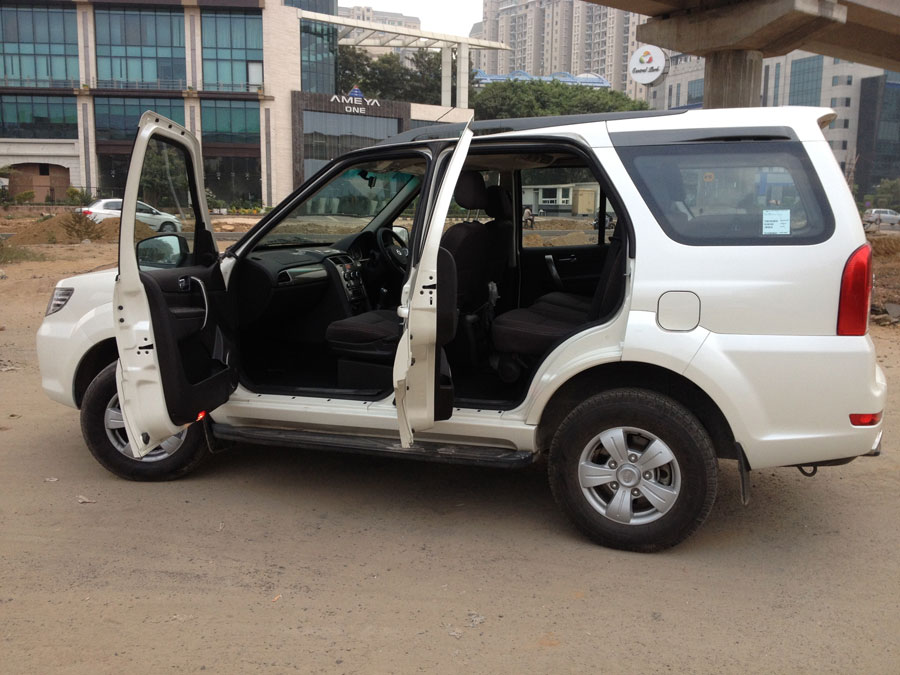 The latest and greatest improvement to the Safari is the 10bhp increase to the 2.2-litre VARICOR diesel engine, now peaking at approximately 148 bhp at 4000 rpm (max torque of 320 Nm between 1700-2700 rpm). Despite the healthy torque and being a diesel, the Storme is rev happy and is thumps along from approximately 1700 rpm to 3000 rpm. Tata claims a low 14 second dash to 100 and I have no reason to doubt that. The engine note is fairly muted at low revs but go past 2000 rpms in a hurry and the diesel clatter is quite loud and a bit gruff. The flexibility of the engine is also demonstrated by my pick-up from dead in second gear (of 5 forward) without much drama, though its best to keep the engine boiling over 1500 rpm for instant response. 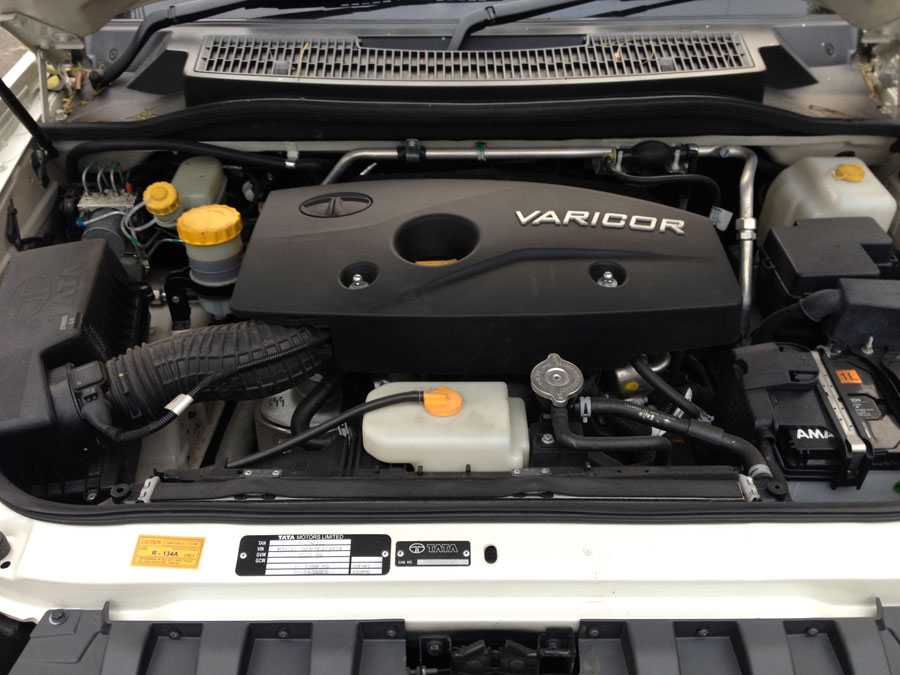 The engine comes mated to a 5-speed manual geared transmission which is unfortunately a bit rubbery to use and long in the throws, though the same is not imprecise and is ably aided by a well set up clutch, that is both light and precise in action. All combined together and the Storme steams along quite well with a predictable and fairly linear power delivery from the turbo diesel unit and never feels overwhelmed by the sheer bulk of the Storme and reaches high double and low triple digit speeds in quick time.

The potential owner would be happy to read that over a hundred off kilometers and in a mix of city and highway driving with the air-conditioner switched on on most occasions, the Storme returned me approximately 14 km/l, which for a car of its dimensions and weight is remarkable to my mind. When you add this to the relaxed and commanding ride on offer along with a healthy 63 litre fuel tank capacity, Storme also provides a fantastic travel range in a cosseting environment 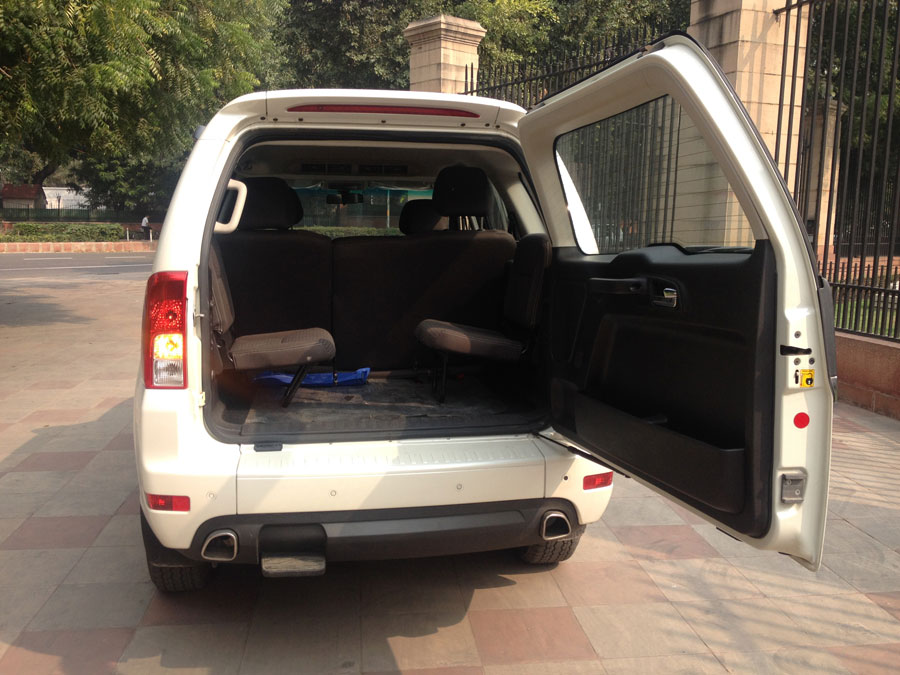 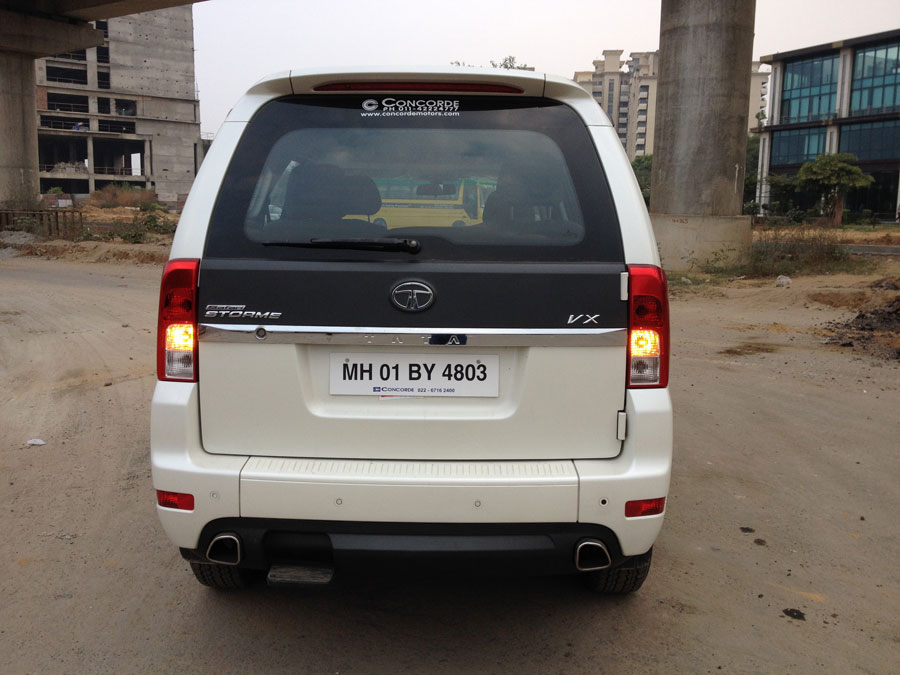 The Tata Safari Storme VX (rwd) is priced at a shade over Rs.13 lacs (ex-showroom Delhi) and a little over Rs.14 lacs for the 4wd option. At this price and in the entry-level SUV market, the competition is fierce but in the Storme, Tata has shown that it will refuse to throw in the towel despite the adverse sales figures. The Storme thus offers the owner a larger than life experience on the road and still manages to appeal to the heart more than the head, though now in a more equitable split. 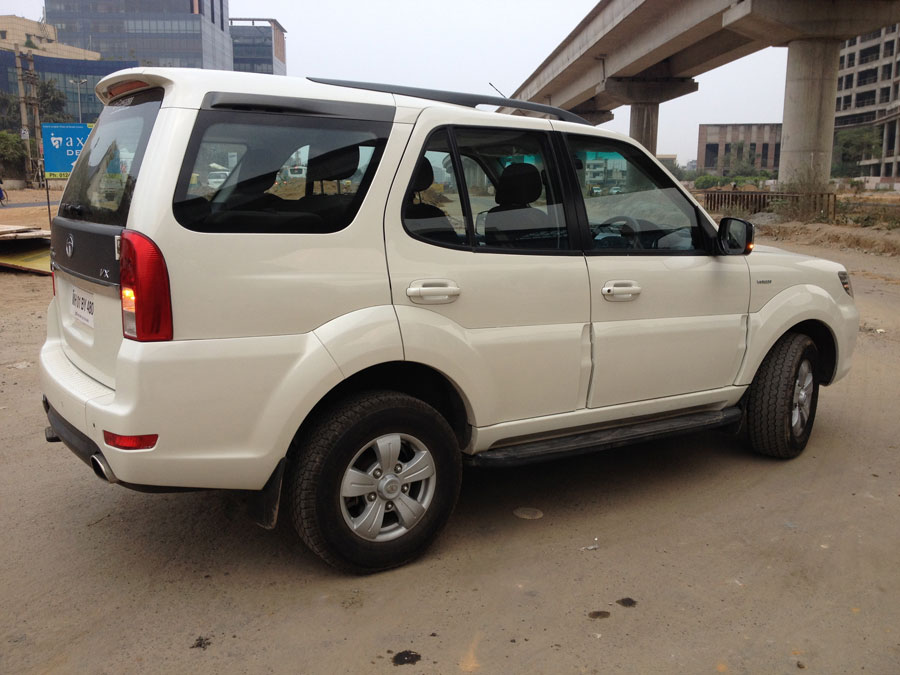 The Tata Safari thus continues to enjoy a prolonged lifespan and a cult status following in this part of the world, and in its latest Storme form it is more refined and noticeably more powerful and capable than ever before, and in 4wd option, a bargain as far as prices are concerned. I do however hope that Tata someday wipes the slate clean and offers a 4wd SUV in the Rs.10-20 lac price range drawing from its own experiences and the wealth of technology and wisdom locked in its Land-Rover subsidiary, to truly shake up the SUV market. We wait.