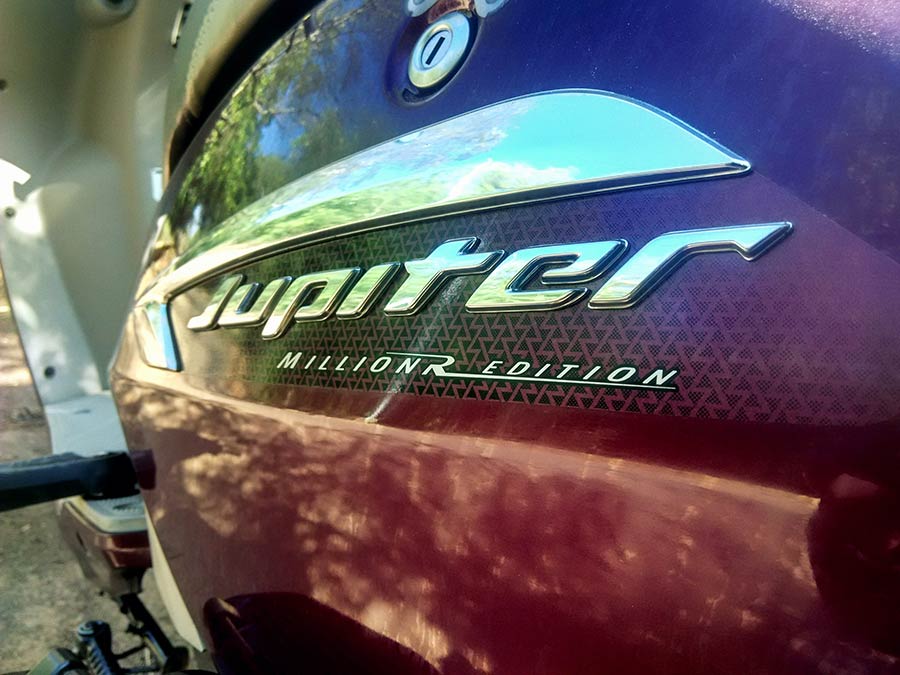 This scooter from TVS looks more mature than any other from the two wheeler company. They have also named it the ‘Jupiter’, after the largest planet in our solar system. Activa doesn’t sound like a name shared by Roman gods of sky and thunder, but Jupiter does. Does the TVS Jupiter really make justice to its name? We find out.

TVS Jupiter is based on the Wego platform but looks more manly compared to its elder sibling. The Jupiter has a neat design with lines flowing all around. The headlight is integrated neatly into the front cowl and also gets twin city lamps for better visibility in low light conditions. LED tail lamps and silver finish grab rails make up for the back of the scooter. Petrol filler cap is taken to the rear end for better convenience. Come to the side and the chrome ‘Jupiter’ 3D emblem makes it look like a premium scooter. 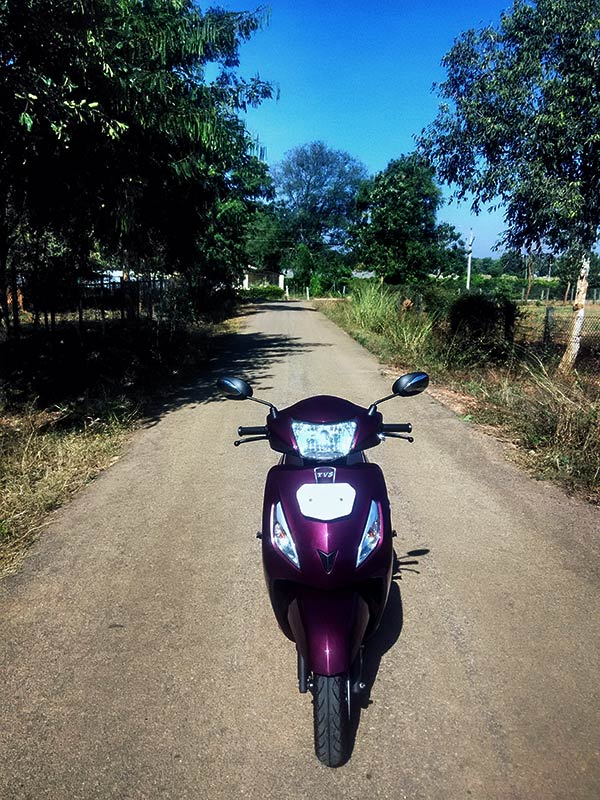 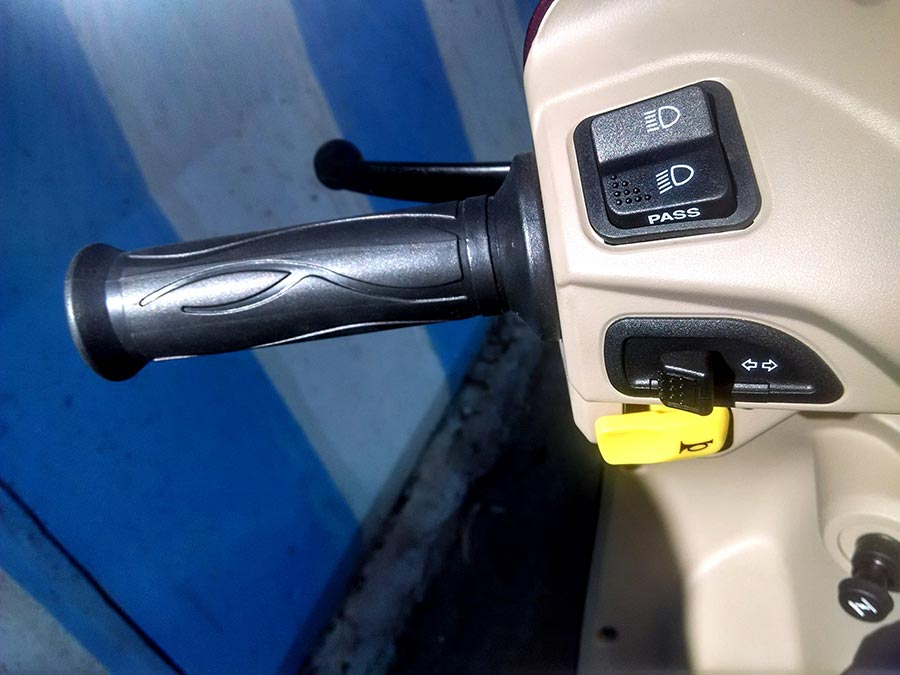 The Jupiter gets a neat looking instrument cluster with 4 tell-tale lights sitting on top of the speedometer. It also gets a fuel gauge to the right and an Econometer to the left. The Econometer is a set of two lights, Green and Orange where the Green indicates economy ride for better fuel efficiency and Orange for power. Jupiter gets two retractable bag hooks which look neat and can be folded when not in use. Under seat storage is 17 litres where the USB charging port is also integrated. 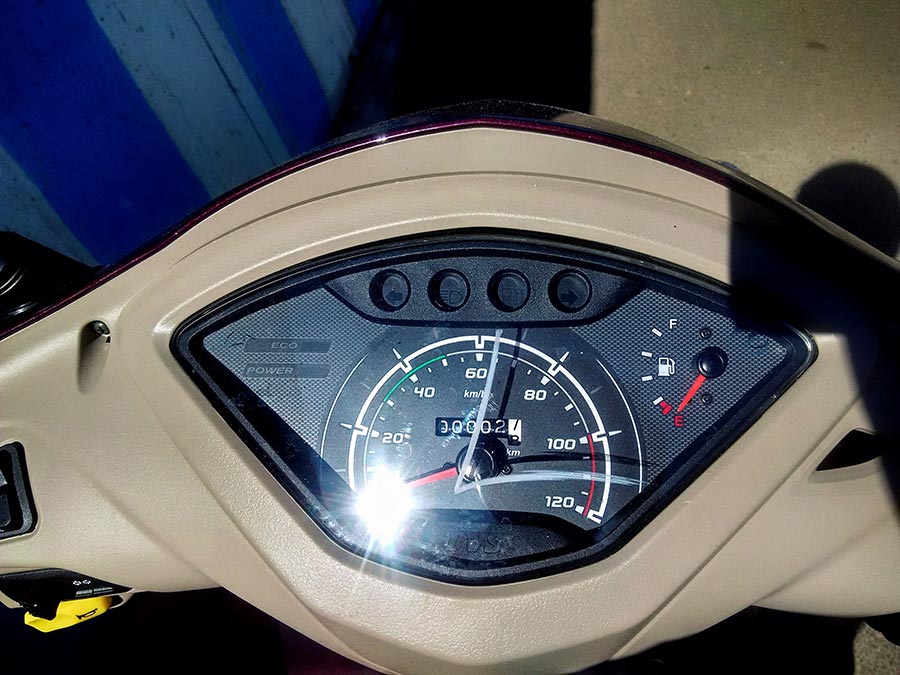 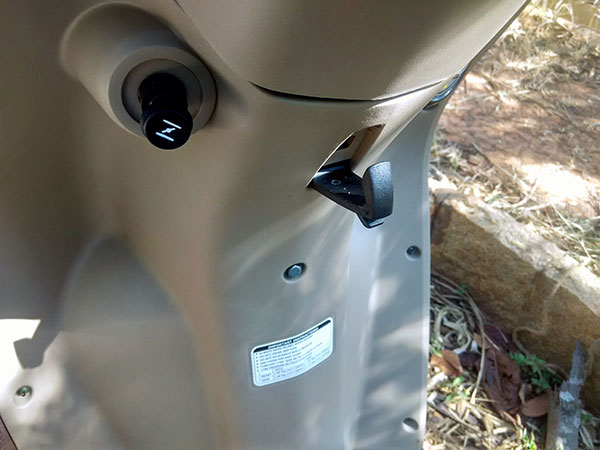 Jupiter shares its engine with the Wego which is a 110cc four stroke petrol engine making 8 bhp @7500 and 8Nm of torque at 5500 rpm. The engine feels really smooth in operation and gives out enough power to take you around the city. Jupiter is 3 kgs heavier than the Wego but this does not affect the performance of the Jupiter compared to its elder sibling. Although, Jupiter is 10mm wider and longer than the Wego. 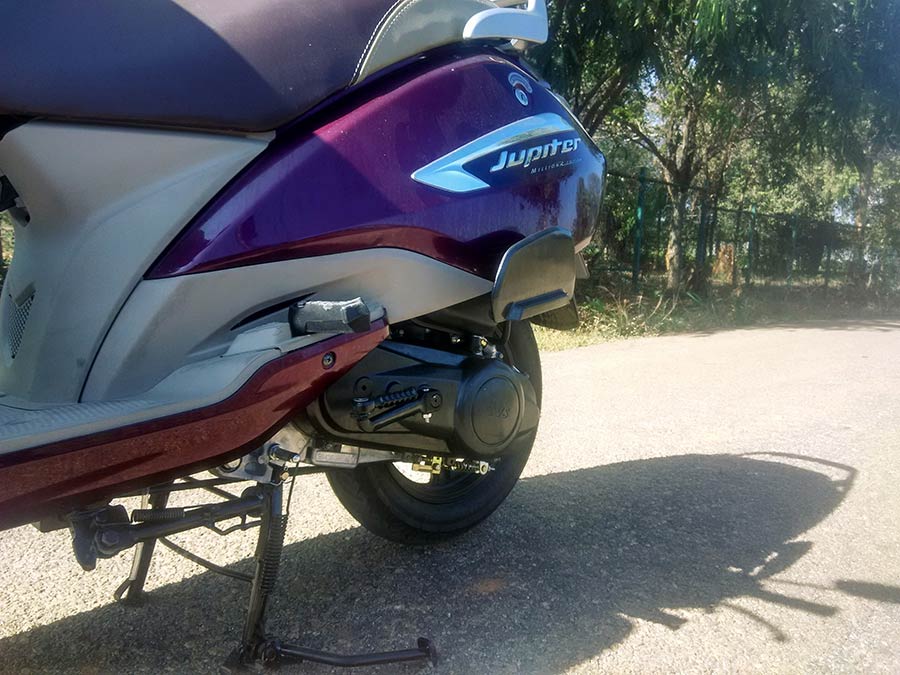 The engine performs really well with enough power to take you through traffic. TVS claims a 0-60 kmph time of 7.2 seconds, but we couldn’t test it because we received the Jupiter with a non functioning speedometer (As it was not a media bike, dealer had disabled the same). Fuel efficiency claimed to be 62 kmpl also couldn’t be tested for the same reason. If these number are true, no doubt the Jupiter will pack the best in class performance and fuel economy. 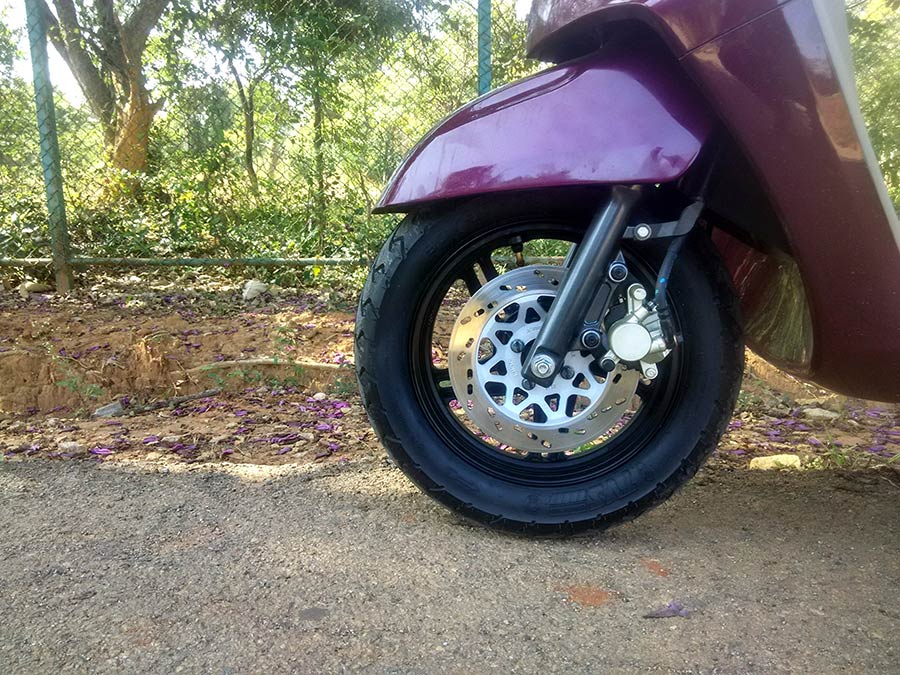 The Jupiter being known for its great ride quality and handling feels planted on roads and glides over pot holes with ease. Front end feels light which makes you take turns easily and remains composed when pushed hard. 12 inch alloy wheels add to the advantage giving way to great handling and ride quality. Telescopic front forks soaks up bumps easily and the front disc brakes offer great feedback and bite. 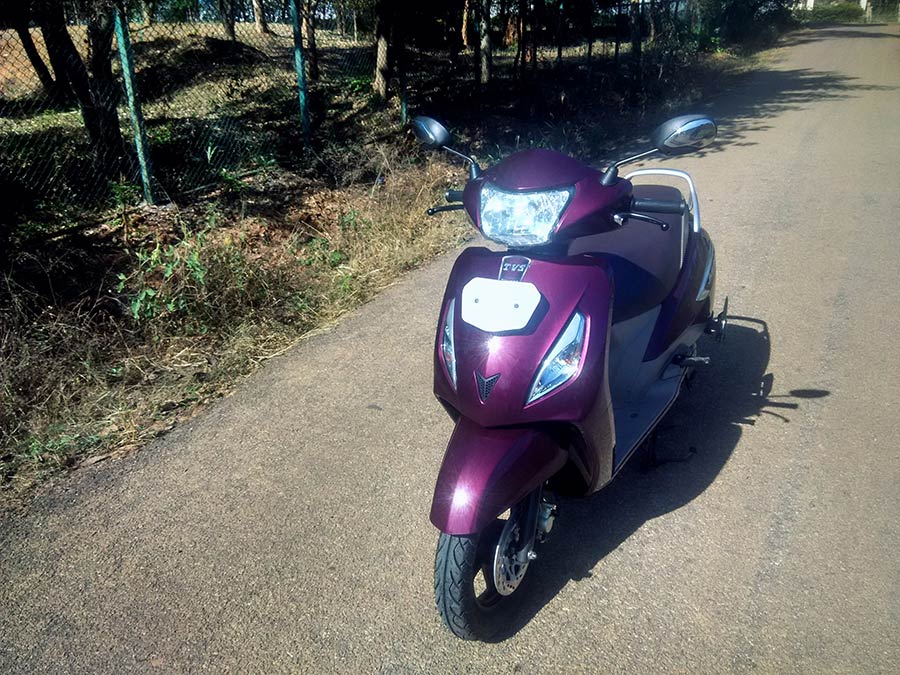 Both the rider and the pillion feel comfortable commuting on the Jupiter in the city but you cannot take it out on the highway expecting to gain same levels of comfort throughout your ride. Foot-board is wide enough for tall riders to place their legs comfortably and the handle does not irritate your legs while taking turns, unlike most scooters in India. The handle grips don’t feel as comfortable as on other scooters but can be improved by adding extra handle grips. TVS have patented something called the E-Z stand which makes it really easy for one to place the bike on the center stand. The Jupiter also gets a pass button intelligently integrated with the high/low beam button. 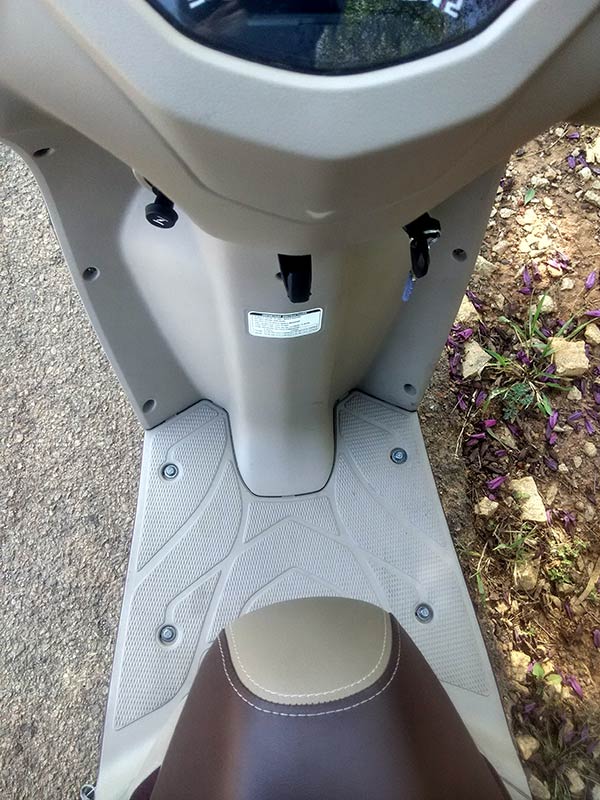 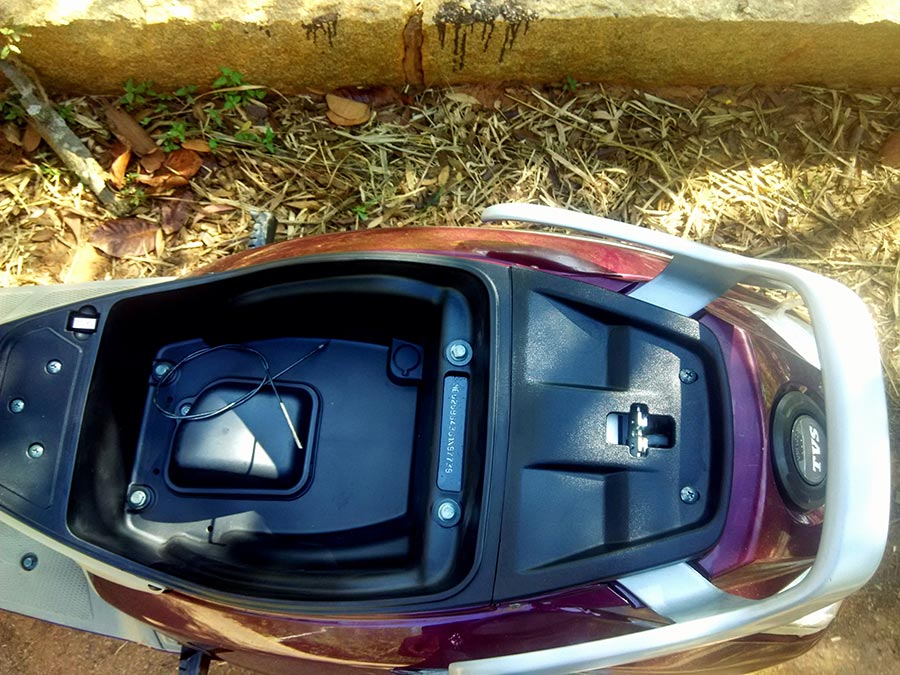 High on comfort and convenience, great ride and handling, good looks with ZX getting beige panels set the Jupiter apart. Now its high time someone dethroned the Activa off the 110cc scooter segment and the Jupiter comes close in doing that. If it can live up to its claims on performance and fuel economy then we have got a best in class scooter right here and you would be surprised when it comes to you at a price of INR 56,454 ex showroom Bangalore. 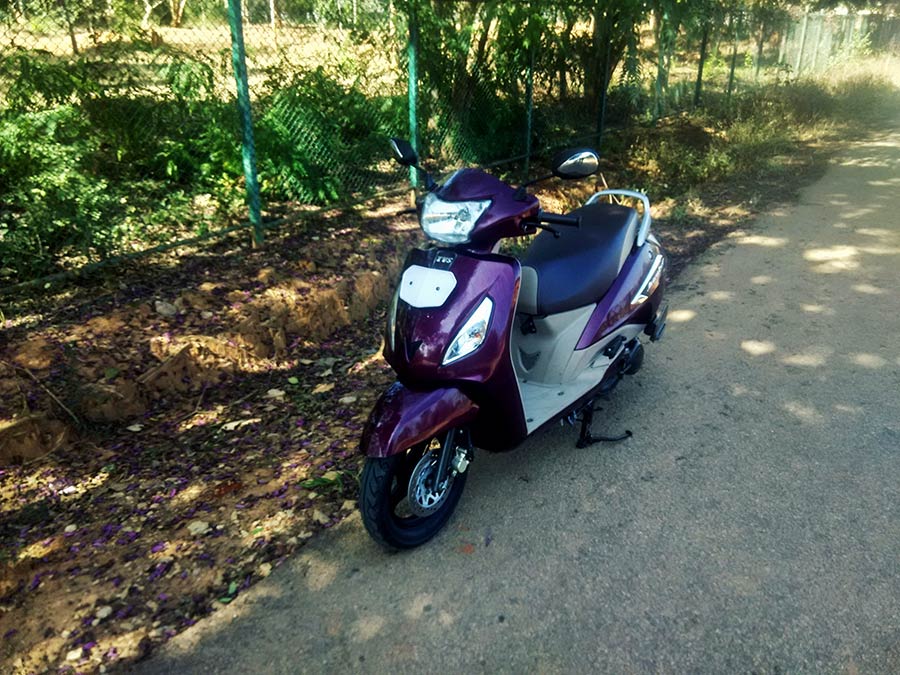