Prices starting from rupees 2.08 lakh, the 2021 Himalayan is a one of a kind motorcycle and the updates have made it a tad bit better and Royal Enfield’s Make It Yours initiative lets you customize it to your liking. 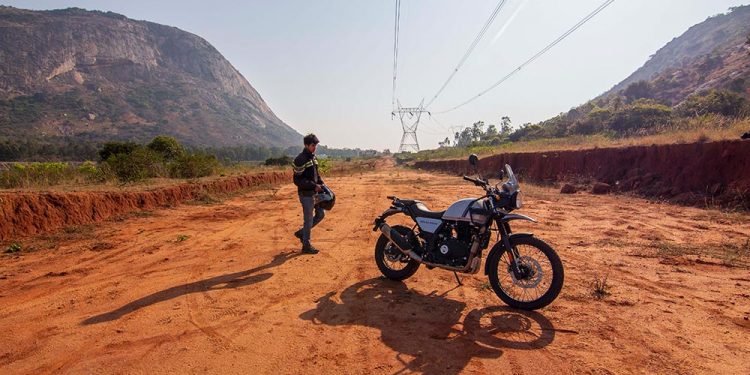 The Royal Enfield Himalayan is no doubt a great machine and the BS6 version we had last year  did impress us in multiple ways. Most prominent of it being its off-road capabilities, the 2021 Himalayan comes with a few changes to help you get there with much ease. If you’re wondering, there are no changes to the engine, chassis or anything that changes the character of the motorcycle, but the changes are mainly around improving the practicality of the Himalayan.

There is a price hike of 10,000 rupees that Royal Enfield charges to justify these changes, and that’s not a bad thing. The 2021 Himalayan comes fitted it with Royal Enfield’s Tripper navigation unit, a new windscreen to accommodate this setup, slashed front accessory rack so it does not unsettle tall riders, an updated luggage rack with a max load capacity of 7kgs (so it says) which now aligns neatly with the tail, upgraded firmer seats, and a few new colour options. Subtle changes include a new black headlight cover and a black exhaust plate as well.

The changes end here and one thing I wished Enfield could have done is redesigned the tank to match the slashed rack unit. It bulges out exactly where your knees rest (at least mine), and if you’re conscious about it, it can get irritating. But again, this can be ignored once you get used to it. Despite that, all changes are decent enough to make it more practical, and I would welcome them with open arms.

When you get on the Himalayan, the console confuses you with quite a few dials. The Tripper unit is mounted to the right end and comes circled with chrome inserts, in my opinion, this looks like a mod rather than a company integrated addition. The redesigned windscreen says otherwise, but at first glance, it does seem a bit off. The ABS switch is quite fidgety, and sometimes just wouldn’t work. With a couple of trial and errors, we figured long pressing and releasing the ABS button between 3-5 seconds was the right way to turn off the ABS, but the process had to be repeated every time you turn off the ignition.

Get going on the Himalayan and the new smoked windscreen does a decent job of keeping wind blast at bay, and is now non-adjustable. Is it an improvement over the old one? Fairly, but I wouldn’t fret over it. I have been previously impressed with how the Himalayan manages its weight, and it stays true. At 199kg kerb weight, it does not feel that heavy on the go, but traffic manoeuvres can get challenging. Built for the highways, the Himalayan has enough juice to comfortable cruise at 90-100 kmph and go until the 110 mark without dismantling your body. Post that, you are just pushing the Himalayan and is not happy.

Impressive low-end torque can get out of tricky off-road trails, but the mid-range is what chariots you on the highway. Overtakes are seamless in the mid-range power band, and anything below 2500-3500 RPM will have you urging for power. The seats are an improvement over the old ones, and I wish they came in black rather than a leather brown on the Matte Silver Himalayan you see here. 150-200 km runs will not have you stone butted anymore, beyond that? Well, you tell us! (Comments).

Braking on the 2021 Himalayan definitely needs an improvement as it lacks in bite and feedback on tarmac. Despite having ABS, the rear brake pedal needs to be pressed hard to even trigger a response, and the front brake lever misses instant bite as well. Surprisingly, this changes once you venture off the roads and no doubt it is where the Himalayan feels at home. The ease of standing up to conquer trails, long travel suspension, impressive weight management makes the Himalayan a great purpose built off roader. The ease at which the Himalayan takes on obstacles inspires confidence in the rider and there is no motorcycle like it right now at this price range.

Prices starting from rupees 2.08 lakh, the Himalayan is a one of a kind motorcycle and the updates have made it a tad bit better and Royal Enfield’s Make It Yours initiative lets you customize it to your liking. There is definitely more room for improvement, but the Himalayan is surely still a great motorcycle just as the way it is.