300cc Mahindra Mojo to be launched in September

by Chethan Thimmappa
in Bikes, Mahindra
3 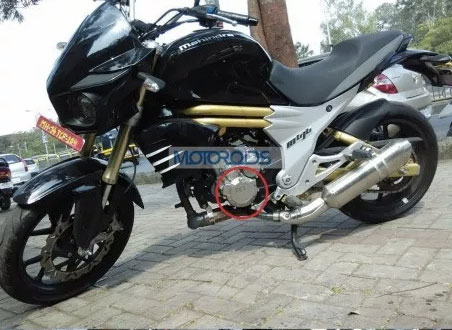 300cc Mahindra Mojo to be launched in September

Mahindra’s much awaited powerful Mojo motorcycle is now production ready. Mojo would be Mahindra’s first ever high end motorcycle to feature 300cc engine. You can see some of the leaked spy shots of Mahindra Mojo captured by MotorBeam. Mojo bike from Mahindra is expected to be released in the month of September.

Based on the spyshots of Mojo, one could expect following features from the bike:

The bike shall get one into two stubby looking exhaust canisters which are placed on either side . As seen before, Mahindra Mojo uses the top spec upside down front forks which is coupled with a rear mono-shock, bolted onto a swingarm that gets a splash of gold on it. For stopping power, the Mahindra Mojo is equipped with a single front and rear disc brake.

[…] After five long years, Mahindra, for the very first time is all-set to launch the Mojo, the most awaited flagship motorcycle. The Mojo concept was first demonstrated five years back. For now, the company – Mahindra has officially revealed the logo and teaser video of Mojo motorcycle. We also reported that Mojo would be launched in India in the month of September. […]