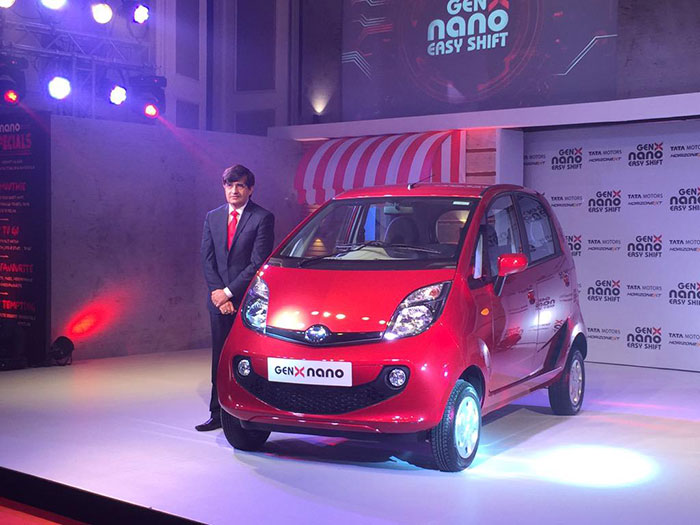 Tata Motors has  officially unveiled its much awaited GenX Tata Nano car today. Tata has launched the all new 2015 Nano GenX Easy Shift in India with prices starting at Rs. 1.99 lakhs (ex-showroom, Delhi). The new GenX Tata Nano comes in 5 different variants XE, XM, XT, Easy Shift XMA and Easy Shift XTA.  The AMT version of Tata Nano GenX comes along with a special creep function that moves vehicle even when the foot on accelerator or brake pedal is released. The said function is extremely useful while navigating through congested traffic. 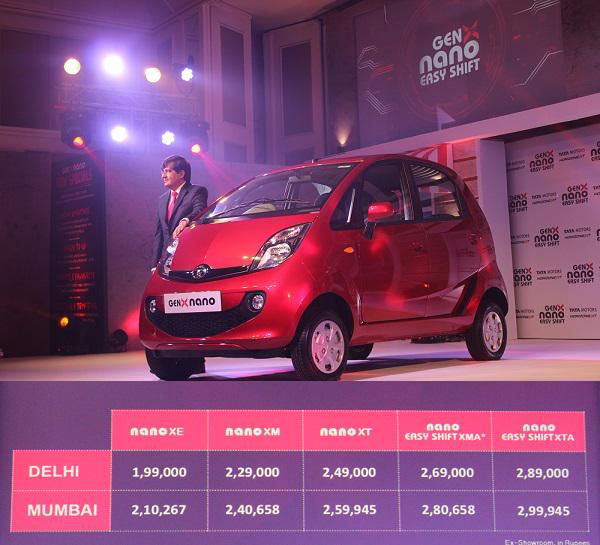 There are 21 new additions which has been done to this car including Bluetooth, AUX and USB connectivity, stronger body, improved control of  noise vibrations and enhanced finishing. The launch of new Nano GenX is a make or break thing for Tata Motors. The company has piled a huge hopes on to this car.

Tata Motors, during its pre-launch campaigns announced various offers for its customers to upgrade to new GenX.

There are 2 additional colors which have been added exclusively for GenX Tata Nano. The available colors of new GenX Tata Nano are:

The all new GenX Nano from Tata Motors has been priced at 1.99 Lakh rupees ( Ex-showroom Delhi).

Here are the full details of GenX Nano Tata for different variants:

[…] GenX Nano by Tata Motors has been officially launched today at Mumbai. The price of new GenX Nano starts from 1.99 lakhs. GenX Nano is available in 2 new […]

[…] affordable pricing and for the value which it delivers. The latest version of Tata nano which is GenX Nano comes with lots of new features including an optional AMT box. GenX nano has been priced at Rs.2.89 […]