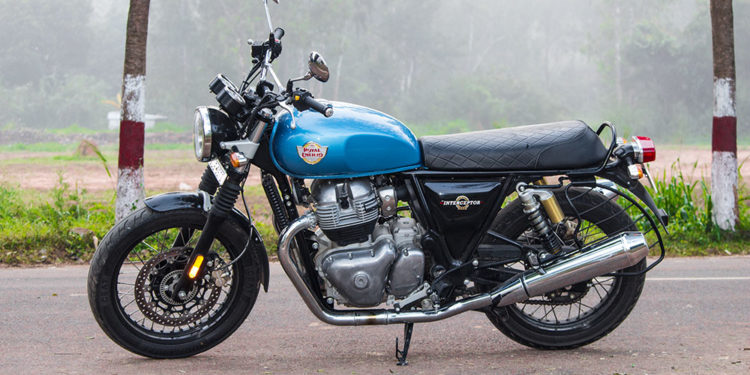 Interceptor 650 was the only motorcycle from Royal Enfield‘s product range which we had not reviewed till date. While we reviewed the powerful Continental GT650 (One of the 650 twins) in the middle of 2021, our desire to review Interceptor 650 finally got fulfilled by the dawn of year 2022. The globally successful 650 Twin motorcycles – the Interceptor and the Continental GT – have received immense love from riding enthusiasts across the world and has grabbed numerous coveted global automotive awards. On the occasion of 120 years of Royal Enfield’s existence, the 120th Year Anniversary Edition Twins were made available via a limited time online sale on December 6, 2021 – which got sold out in split seconds. Let’s get into the full details of this amazing machine in this review and Yes! we have got some great photos of Interceptor to share with you.

The motorcycle was handed over to us with a great care at Royal Enfield’s official company store located at BTM, Bengaluru. We were truly impressed with Ventura Blue color, the paint looks great on Interceptor 650’s fuel tank – it is a very cool and welcoming color option and goes well with the black. It is a big bike and we were truly excited to hop-in as quickly to start experiencing the motorcycle. This motorcycle looks so gentle and humble, and earns respect for itself – the shiny bright halogen light from the silver-chrome coated round headlamps, rejuvenates one’s soul for lifetime.

It is so minimal, rightly done and should be made the new definition of simplicity. The elegant Royal Enfield logo on the metallic blue colored sculpted fuel tank is just beautiful. As you see downwards, it is followed by big engine, and all the machines underneath glowing in silver, the black radiator grille, the two large exhaust pipes moving out of twin-cylindered engine. The Interceptor logo, the Royal Enfield logo on engine guard, spoked wheels, the way suspension systems and brakes looks from the rear, the simple non-complicated tail lamps – all these elements makes this motorcycle look so complete just at first glance.

Ergonomics, More on Design and Style

The handlebars on the motorcycle are wide and easy for the rider to hold it confidently with a very comfortable seating position. The new Interceptor 650 gets Side stand with engine-cut off system, which makes sure you cannot start the engine until you fully open the side stand. You will be getting silver chrome plated round rear view mirror to observe the rear traffic/objects.

There is a dedicated kill switch and the switches used by rider are of high quality and has a very good tactile feedback. The motorcycle is equipped with always on headlamp, indicator switches, simple two dials – one with speedometer which also houses digital fuel level gauge and tripmeter, the other dial hosts you analog tachometer where it can tick upto 9000RPM and also digitally indicates ABS on/off, engine/oil warnings, side stand indicator, service indicator and other informational icons helpful for your journey.

For you to sit in a commanding and upright riding position, you get a diamond patterned black seats that are quite long, tough and cushiony. The seat is long enough to accompany a pillion rider at the back. The footpegs and grab rails are offered at right places for the pillion.

The Royal Enfield Interceptor 650 motorcycle is powered by parallel twin, 4-stroke, air/oil-cooled 648cc engine. To fire the engine you get Fuel Injection digital spark ignition system. The engine is capable to churn out an whooping 47 bhp of power at 7150 RPM and outputs 52 Newton metres of torque at 5250 RPM. The engine is mated to a 6-speed manual gear system. The Interceptor 650’s body is made of tubular steel frame with bolted trussing. The front suspension measures 110m in dia and gets 44mm front forks and for the rear suspension, the motorcycle gets 88mm dia twin coil-over shocks. The motorcycle moves forward with the help of 18 inch wheels both in front and rear measuring 100/90-18 and 130/70-18 respectively. The front brakes are big and tough with 320 mm dia with ABS system and for the rear tyres, there is an ABS system with 240mm rear brakes.

Lets talk about the dimensions in absolute numbers. The Interceptor 650 gets quite a long wheelbase measuring 1400mm, (quick U-turns are bit of a work in narrow roads) and has a ground clearance of 174mm, fair enough to go off-road. Shorter riders can rejoice as this motorcycle’s seat height is 804mm and this should be fine for you to get-into the riding position. The motorcycle measures 2122 mm in length, 1165 mm in width and 789 mm in height. The fuel tank capacity offered in 13.7 litres with a litre of reserve. The motorcycle is heavy and weights 202 Kgs (without fuel) – ( Do not worry, It is as easy and light when you are riding, bulkier machines makes you feel better and stable at great speeds).

Here comes our favourite section of this review – Riding the motorcycle . It is bringing happiness on our face just to tell how good the riding experience was. The moment you start, you hear that amazing ignition start noise followed by engine noise that is so gentle and warm to hear. As you throttle gently, it takes yourself along with the motorcycle – so confidently that you never feel like stopping. If there is a need for you to make your presence felt, all you have to do is accelerate a little harder, and man, the whole world around you wakes up with enlightenment felt in their ears and brains – such is the amazing roaring sound of this beast. The power is absolutely at your disposal, and you are the one who decides the gameplay running on the street. It is a pure motorcycling Joy, you could move 0-120 Kmph in like about 5-10 seconds, in whatever gear you are – throttle, throttle, throttle and it takes you there.

It is absolutely necessary to be equipped with advanced and powerful brakes to break your pace into hault, thanks to ABS system at both front and rear tyres. The brakes are real good components of Interceptor 650 that stops any mad rush. The gear shifts happen well, it is not so smooth, but not hard either – the shift happens and engages well – all you notice is a very stable performance through out your journey.

We tested this motorcycle on highways as well as jam-packed city roads and there is nothing to complain. This motorcycle immortalizes and adopts to any condition which you are riding. It rides really well in bumper-to-bumper traffic jams – offers a good manoeuvring and ideal power output – just as much you want – not more nor less – the way you want. The Interceptor cruises to speeds of your liking on highways and straight roads. The Interceptor encourages you and also silences you down – It is an ideal companion to live with.

The Interceptor offers good control when you are cornering. The suspension system takes on bumpy, crampy roads and it goes tough when the going gets tough. The brakes are incredible – what else do you need in a motorcycle? The pillion sitting at the back could also experience the Interceptor like you did, just that they need to be careful of sudden accelerations and be seated towards the motion of the motorcycle and they should be advised holding the grab lines.

Performance wise, it is a well-sorted motorcycle, how about the fuel efficiency? A 650cc Twin cylinder engine powered motorcycle at this price point (2.69 lakhs ex-showroom Bangalore), is a steal deal. The fuel-efficiency offered by this motorcycle is about 18-20 Kmpl which is again a good deal for that absolute pure powerful motorcycling experience.

Colors, Variants on offer and Price

The all new Royal Enfield Interceptor 650 is offered in 3 primary variants – Standard, Custom and Special. The ex-showroom Bangalore price of Interceptor 650 Standard is Rs 2.69 lakhs, Custom variant is Rs 2.78 lakhs and the Special variant is Rs 2.92 lakhs. There are various colors offered – and it is subject to the variant you have chosen. Following colors are on offer:

You should buy an Interceptor 650.

We felt the Interceptor 650 is better than Continental GT 650 in many fronts including practicality. In the big bike market you get nice powerful 650cc motorcycles like the Ninja 650 by Kawasaki (Priced about 6 lakhs upwards) and similar one’s which could match the power figures offered by Interceptor. When you think of power and when you also think of your budget capping around 3 lakhs – the Interceptor 650 is the only answer. What’s your pick?