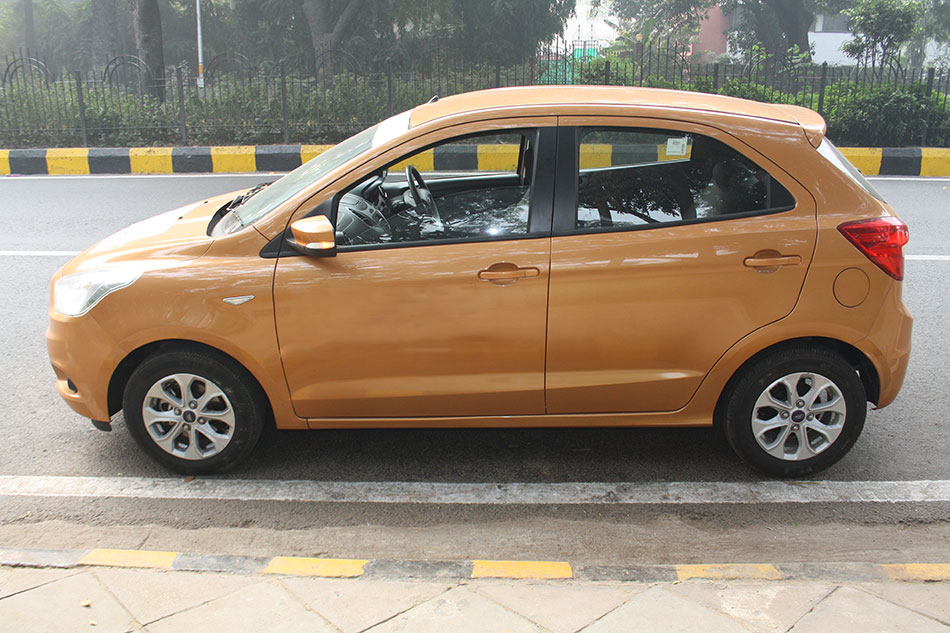 After the success of the Ecosport, Ford again rolled up its sleeves and got back to work, not content to play second fiddle any more to the Asian giants. The new Figo has possibly redefined Ford’s position and perception amongst the Indian car buyers as the current compact hatch and sedan (Aspire model) class leader. The model car here reviewed is the 1.5 litre petrol hatchback in Titanium trim, with a 6-speed automatic dual-clutch gearbox. The latter is the focus of this review as the hatch continues the good thing earlier highlighted in our prior review of the Ford Figo Aspire.

The automatic Figo hatch only comes with the potent 1.5 litre petrol engine in Titanium trim. The power output of 112 PS and 136 Nm of torque has the making of a hot-hatch by Indian standards and in real world driving conditions, never does the driver feel short changed about outright power, though the engine’s true potential could be best unleashed by a slick manual gearbox. The engine is refined in action and sound, and with the auto box mostly always in the torque band for immediate response. 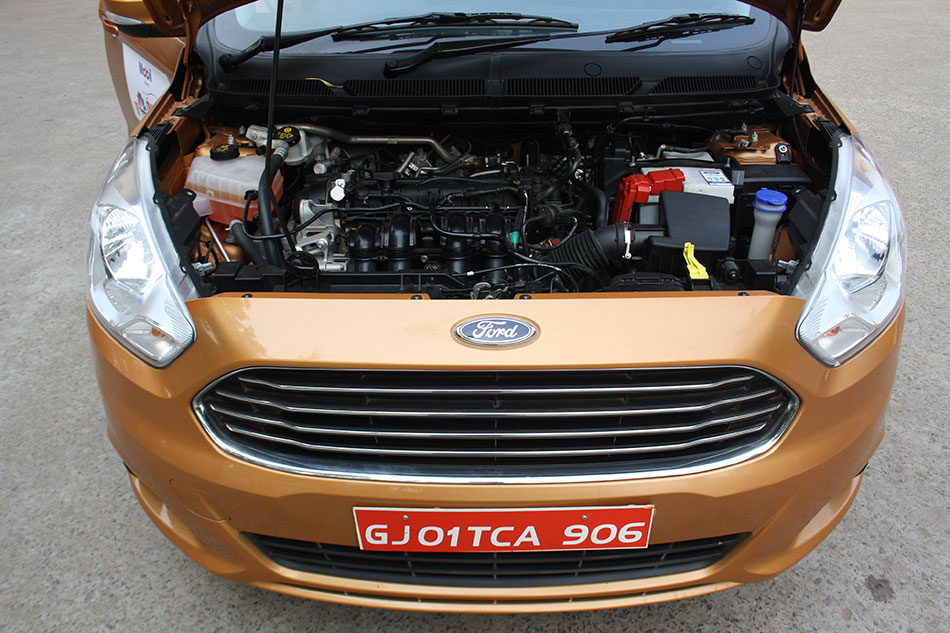 The dual clutch automatic gearbox is a 6 speeder and is impressively seamless when going through the gears. Even the slight momentary lag between gear changes in ‘D’ mode does not jerk the car or the transmission and neither is there a loss of momentum. The automatic box in ‘D’ mode however works best with a sure (if not firm) footed input. Even in ‘D’ mode there is plenty poke and the Figo hurls itself forward in quick time and through fast down shifts, but when not been hustled around, for optimum fuel efficiency, the gearbox shifts down just around the 2000rpm mark. In ‘D’ mode, initially the Figo does creep forward but not in an alarming manner and if not heeded to, does settle down a bit with the brake. In stop go traffic or when waiting at the lights, the ‘P’ slot is much handy as the alternative hand-brake option and to rest.

For the occasional blast, the gearbox also provides a ‘tip-tronic‘ override mode by selecting ‘S’ and then working the 6-speeder through the ‘+’ ‘-‘ metal finish buttons on the side of the gear lever. The override is however still controlled by car speed and will down or upshift accordingly to keep the Figo in the meat of the power band. The tip-tronic function though allows the gears to be held on to longer in the power band and the engine to be revved much higher for outright pace and acceleration. Despite the premium finish and slick action of the buttons, its positioning may not be ideal and paddle shifters behind or alongside the steering wheel would have been ideal. 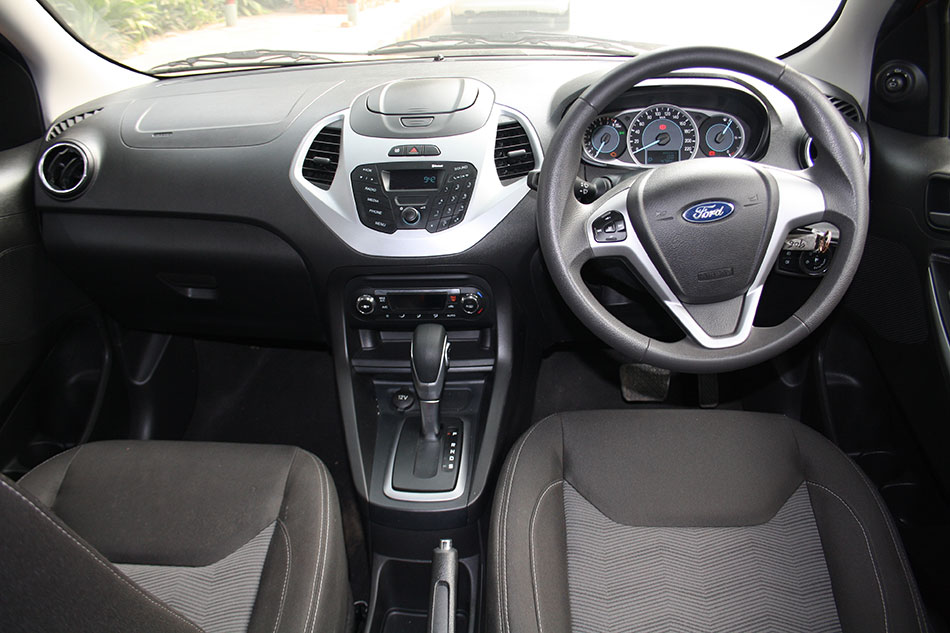 The Figo hatch rides very well on its 14′ alloy (in Titanium trim and higher) wheels and was composed at all speeds attempted. What also impressed again was the feel and action of the meaty steering wheel (with integrated music and phone functions), the electronically assisted power steering was direct at high speeds and light at low speeds. Another impressive feature of the Figo was the suspension set up and cabin insulation, which quietly and in a composed manner soaked up bad and broken roads. As a hatch the Figo also is extremely manoeuvrable and can move into and out of tight spaces for parking purposes and threading through traffic. Boot space at 257 litres isn’t large but par for the segment with a tray to avoid prying eyes. However to significantly increase cargo area, the rear seats fold forward to provide fairly flat load surface. 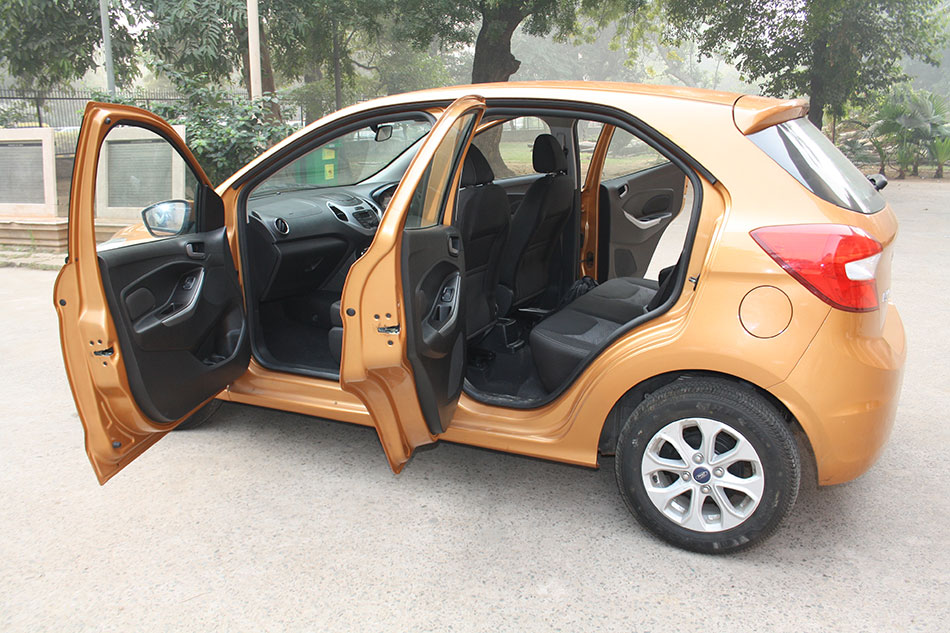 The Figo hatch is a smart looking car inside and out, though the rear is not as dramatic or stylish as the front, that has the the Aston DB look about it. The build and feel is yet another impressive feature of the new Figo range. All the switchgear, plastics, seat and door fabrics etc. and metal body feel solid, well-finished and tastefully appointed. The cabin is very roomy and airy and seats 4 adults in comfort and ideal for small families. The air-conditioner on the Figo is extremely effective and in the Titanium trim comes in electronic form with an impressive metal finish for dial controls. 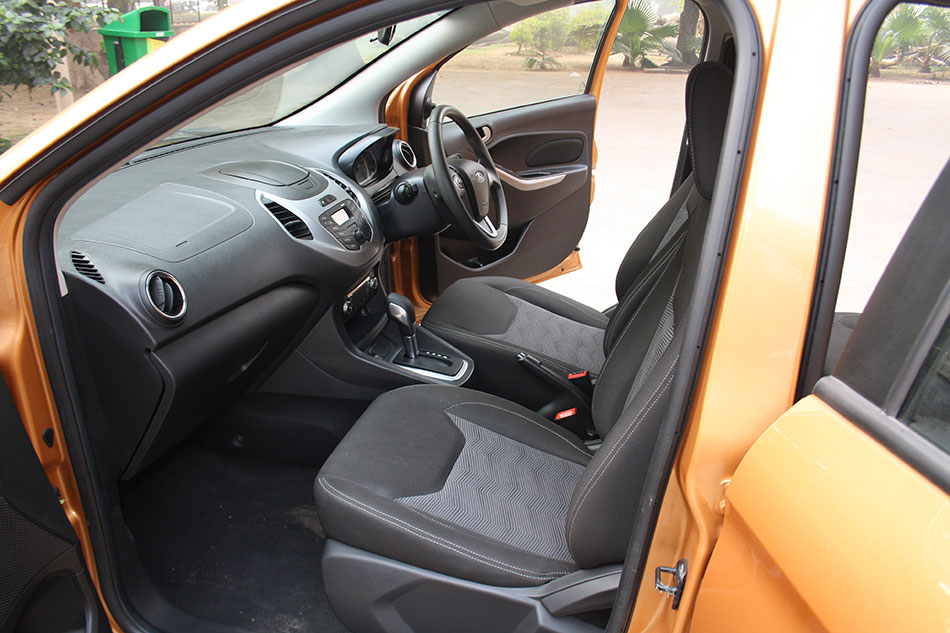 For safety, the Figo especially in the higher trims comes with airbags for front passenger and driver (‘6’ in the Titanium + trim), Anti-lock Braking System (ABS) with Electronic Brake Force Distribution (EBD) as well as Electronic Stability Program (ESP). In real world operation, the brakes are sharp and reassuringly potent.

Ford claims an ARAI-certified fuel consumption of 17 km/l for the automatic and the Figo comes with a 42 litre petrol fuel tank capacity. In my short test however I could managed around 11 km/l in a mix of city and highway driving with a bit of spirited driving thrown in the mix at times. Whilst this figure might not be impressive in itself, it has to be interpreted in its proper context (like a true lawyer I speak), not least of which is the power on tap, an auto box that provides hassle free driving, petrol fuel and bulk city traffic driving conditions which would be its natural habitat.

Ford has hit a purple patch in India with the Ecosport and the new Figo. The Aspire impressed enough for us to proclaim it as the new class leader and the sales book figures have substantiated our declaration. The Figo hatch has come in and built on the impressive fundamentals of the Aspire and completed the model range for Ford by offering the flexibility and versatility of a hatch. The Figo hatch is available in five trim levels and with two petrol and a diesel engine for engine options. The Figo hatch starts at Rs 4.29 lacs (ex-showroom, Delhi) for the petrol variant and diesel from Rs 5.29 lacs and tops out at a bit over Rs.7 lacs for the Titanium + trim. The automatic here reviewed comes in at approximately Rs.6.90 lacs (ex-showroom Delhi). For any body in the market for a premium automatic hatchback for a not so premium price tag, your search starts with the Ford Figo 1.5 Ti-VCT petrol hatch.

Tata Zica would also be offered in AMT version