It was a pleasant late Friday afternoon that the Mahindra TUV 300 (“T8” optioned ) was delivered to me for a review and to keep for the weekend. Here follows a snapshot of my impression of the latest offering from Mahindra, the tough and stylish TUV 300, the best yet and possibly a sign of great things to follow from a manufacturer that India can proudly call its own. 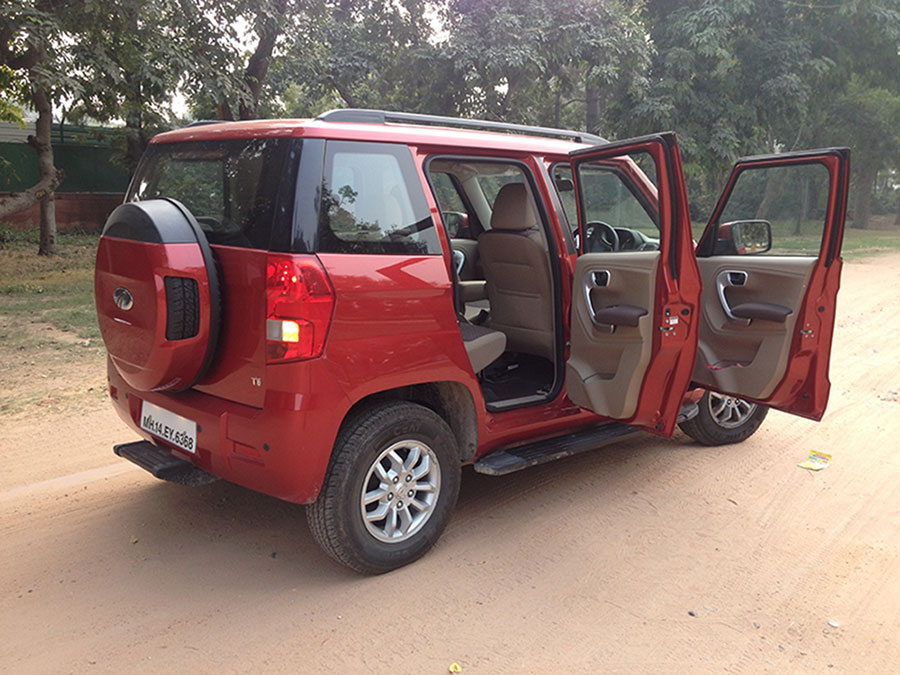 Mahindra to my eyes and experience in gauging public reaction, has got the external sheet metal design and proportions right, even if some design elements may have been drawn from Jeep Inc. Its also a quite remarkable feat that the TUV 300 is sub-four metres in length and yet offers a 5+2 arrangement though by eating into rear boot space of approximately 384 litres. Whilst on the move or waiting at the traffic lights, passing motorists and the odd pedestrian would look back with a mixture of admiration and inquisitiveness at the sharp looking yet butch gentleman behind the wheel or was it the TUV 300, my memory fails me. I witnessed speeding SUV drivers look at me with some measure of envy and respect and I got honked rarely only by auto-rickshaws. 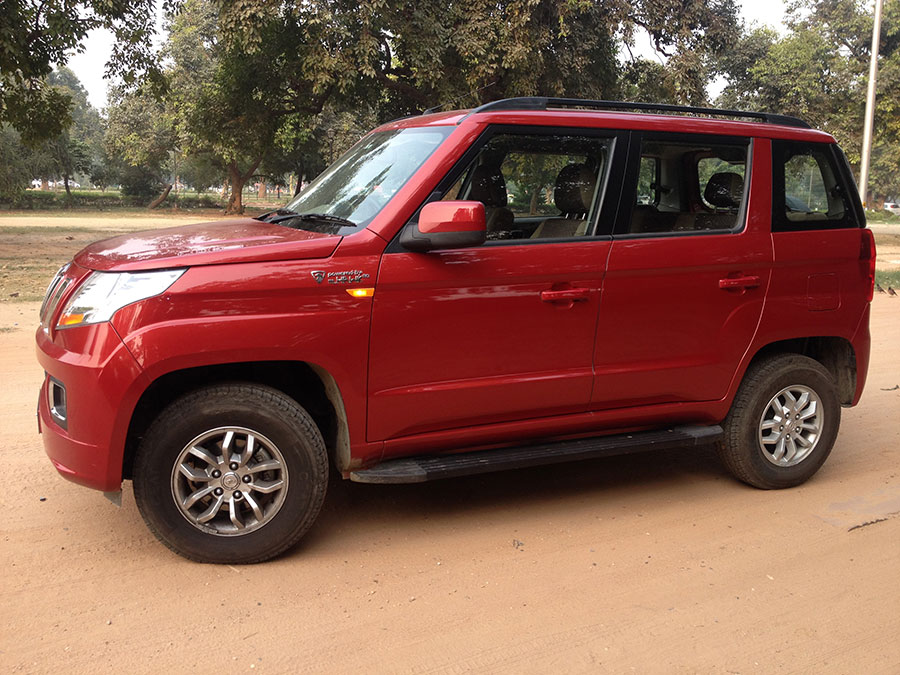 The TUV 300 looks and also feels built to last. The cabin is free of rattles and squeaks even over the worst, though some of the interior plastics look and feels tacky and low rent. The doors are reassuringly weighty without being overbearing and thump into lock or otherwise and the large square rear view door side mirrors are the way I like them in my SUVs. The general switch gear quality is good and electrics work well. The fabrics used for the seats and cabin in general are tasteful and feel hard wearing. The cabin in general is airy due to the large glass area and the all important rear leg room is plentiful and should seat 5 all up in absolute comfort, though the +2 seats at the back are best occupied by children and by adults for short journeys. The air-conditioner is extremely effective and the T8 comes optioned with most electric features that buyers expect, including power windows, power mirrors, keyless entry and central locking amongst others. 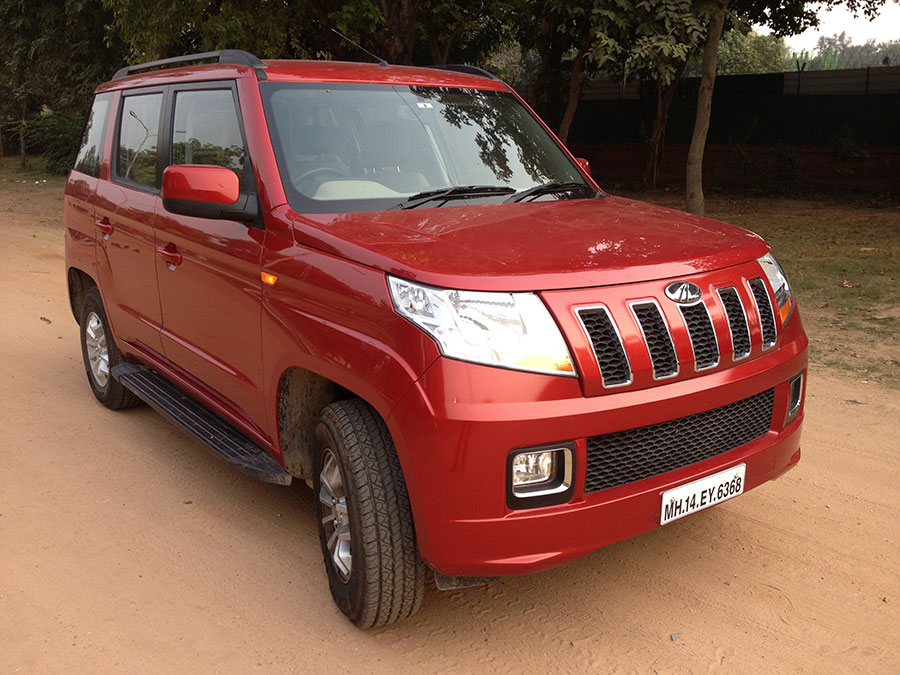 The TUV has tank-like feel to it and tips the scales at a little over 1.5 tonnes. However the TUV doesn’t merely rely on steel and weight to assure and cocoon the occupants, and in the T8 version comes with standard modern safety features including front driver and passenger airbags, side intrusion beams, ABS with EBD for braking and a collapsible steering columns for impact absorption to go with the general build of the TUV. The brakes felt adequate for bringing the TUV to a stop from reasonable speeds, though the brake pedal action could be slightly improved for a more reassuring feel. 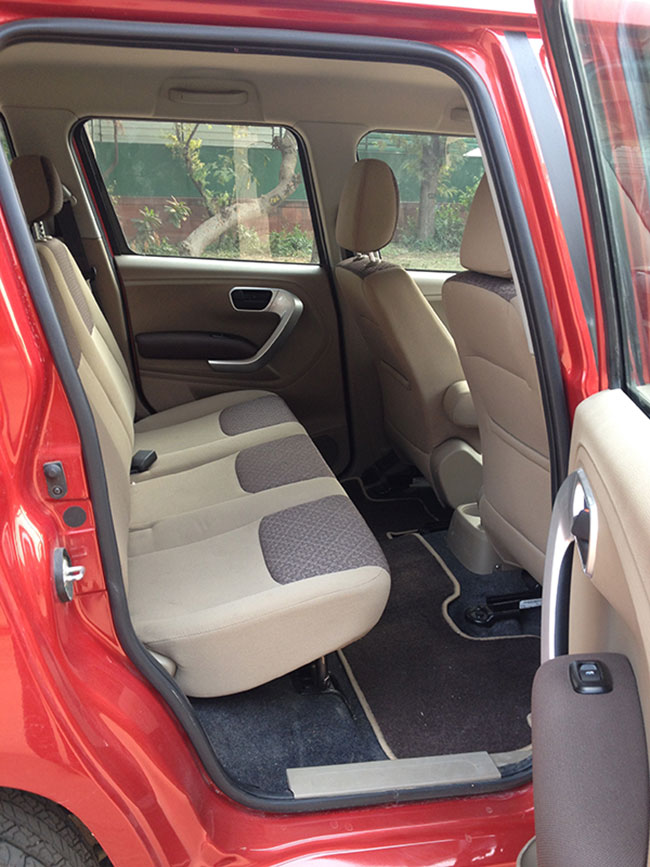 Prior to driving and reviewing the TUV 300, I was blissfully unaware that the engine is a mere 1.5-litre three-cylinder diesel (“mHawk80”) with a high-tech dual-stage turbocharger with a claimed power output of 84 bhp and 230 nm of torque (between 1500-2250 rpm). The engine lacks any top-end surge as the numbers and the launch from 1st (of the 5) gear evidence, but more importantly, the TUV is extremely drive-able and responds faithfully at any speed and in any gear with no sense of turbo lag and tracts along with no fuss through its rear wheels over any terrain. At idle, neutral and at low revs (below 2000 rpm), the diesel engine note is impressively muted and at higher revs it is more the lack of pace rather than engine clatter that would bother most. If Mahindra can squeeze out an extra 20 bhp from the engine and possibly also provide the 4wd option to go with it, nothing in the market as it stands would dare to stand shoulder to shoulder with it. 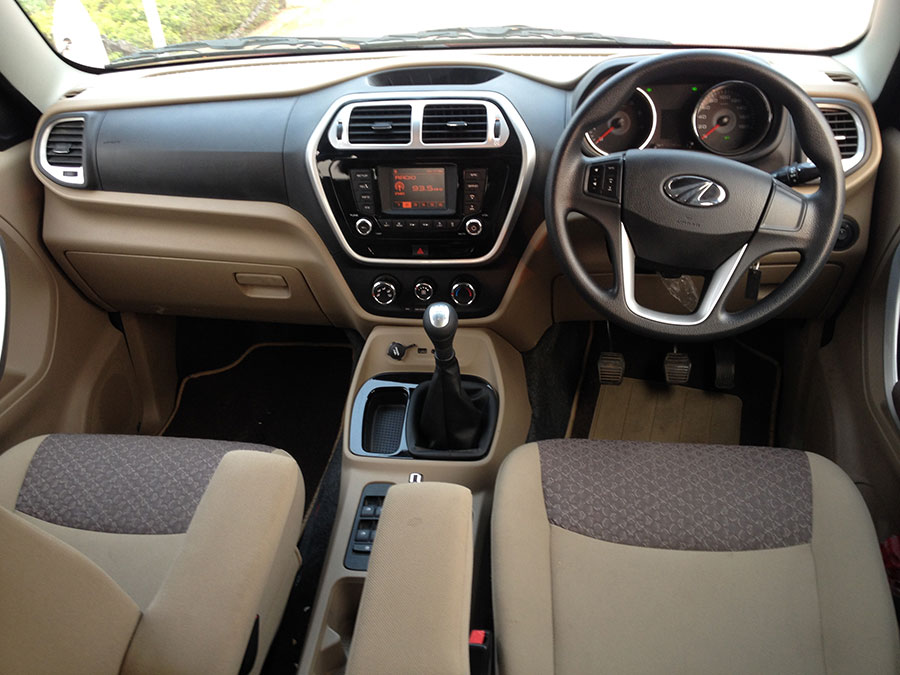 I say the last bit for good and quite literal reason, when driving, everything else (including expensive European SUVs) just felt pale and insignificant in comparison sizewise and heightwise, such is the commanding vantage point that the TUV 300 gives the driver. The ride at speed in a straight line is firm footed though I stayed clear of sharp direction changes, for the TUV does bounce and roll a bit on its 215/75 R15s and the unavoidable physics that come into play with a high centre of gravity with such cars. 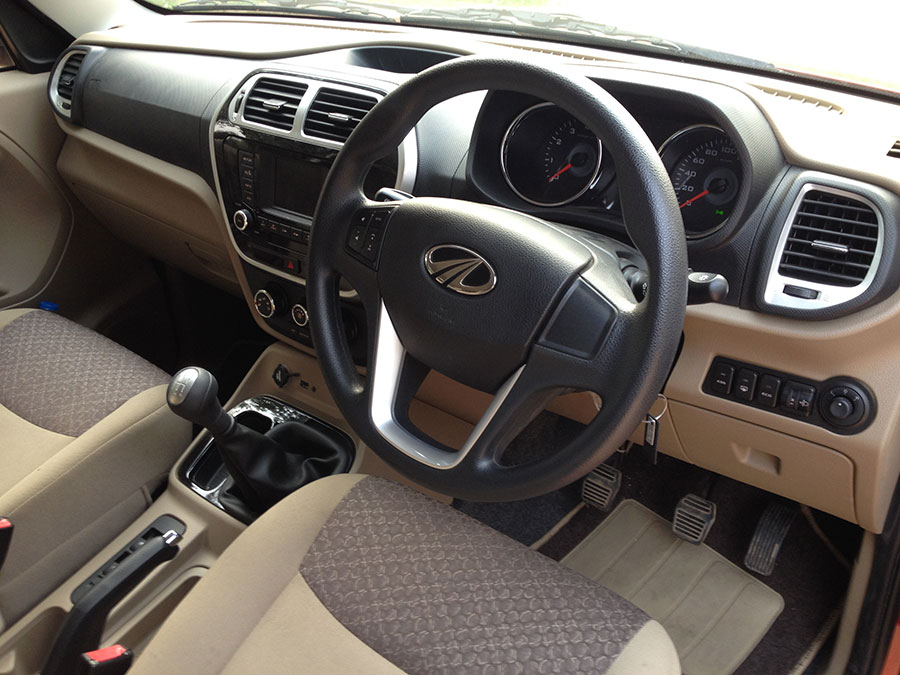 The power steering feel and action though to me is a triumph, it feels right and is quite direct, not overly assisted and not too heavy for tight turns with enough weight to hold course at speed. In the T8 version the steering also comes equipped with integrated audio and phone controls and adjusts for rake/tilt. The clutch action and weight is perfect, not too light nor heavy for even city stop-start, though the gear lever action (vibrates with engine note and rubbery when slotted into gears) and design (too long and bulky to hold or grip) itself are unfortunately a disappointment, and an oversight that should be fixed in quicktime, given the engineering, drive and transmission refinement that the TUV’s competitors offer off the bat. 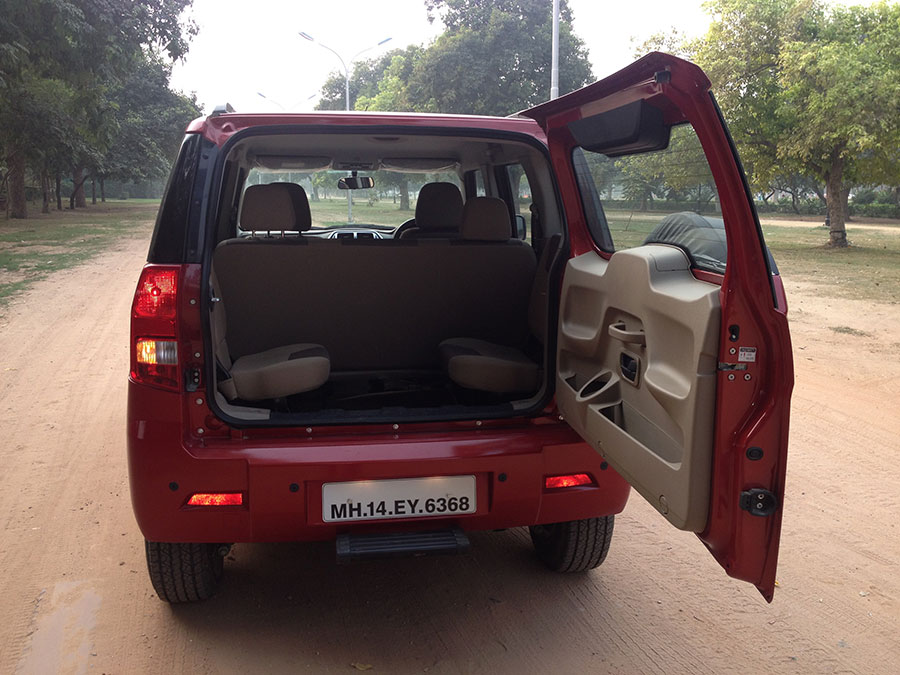 The official TUV300 Mileage claim is approximately a little over 18 km/l over a combined cycle of city and highway driving, unfortunately I drove a mere 70 odd kilometres due to paucity of time and the absence of a digital read out fuel mileage achieved in real-time thwarted my efforts to calculate my personal fuel returns. However given the fact that a digital bar of fuel disappeared immediately when I first took to the wheel and then the rest stayed on for the remainder, should be a sign that all is well. The TUV 300 also comes with a ESS (Engine Start-Stop ‘micro-hybrid’ system) and ‘Eco’ modes to direct the engine to drink less though at the cost of some response and pace. 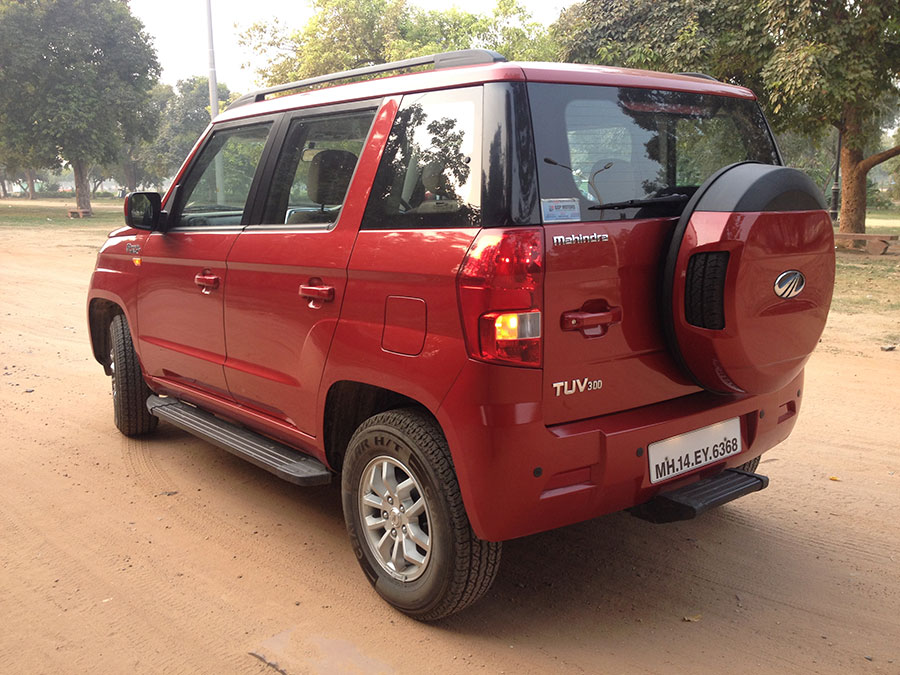 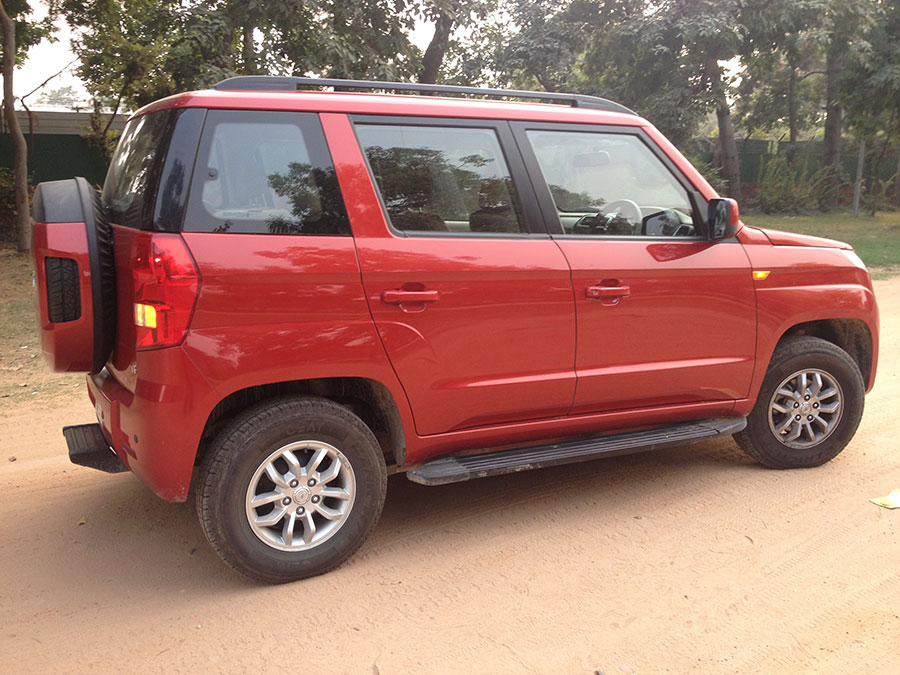 In the heartland and amongst the dedicated, the name Mahindra is mentioned with reverence and the same strikes at the core of every true (and at times hot) blood Indian. Though well known for rudimentary all terrain jeeps that provide a butch and no frills ride through India and whatever she may throw at the driver, that perception changed with the Scorpio and then the XUV 500, and the TUV 300 to me is another and possibly the most important landmark in the corporate journey of the Mahindra car company, though not to say that the roughness round the edges have disappeared, they have just become less prominent (despite the ungainly and bobbing gear lever and the wheezy spring-like sound generated every time the accelerator was pressed or released with the clutch). In the TUV 300, Mahindra has brought a tough and worthy fight straight to the doors of its more established European and Asian counterparts. One feels that with every passing moment Mahindra will only get better and stronger, such is the quality of competition it faces and that is good for the Indian consumer in general. 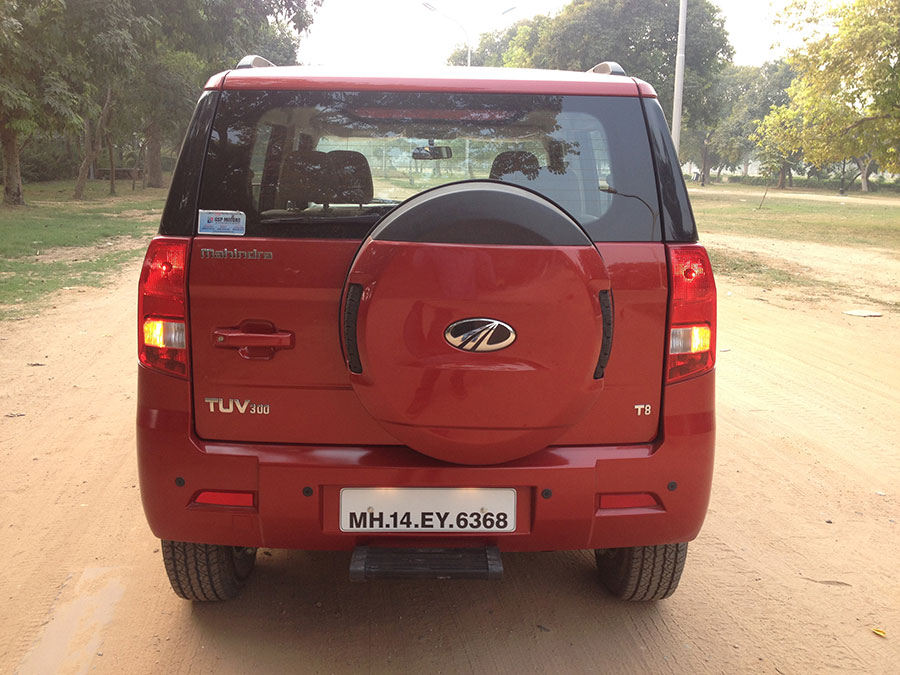 Talking about the price, The TUV range starts at a shade under Rs.7 lacs (ex-showroom Delhi) and peaks at a bit over Rs.9 lacs for the top optioned T8 (Automatic Transmission), and approximately Rs.8.5 lacs for T8 reviewed here. At this price range, the Ford EcoSport and Renault Duster to my mind are the TUV’s immediate competitors and so the TUV will do well to divert sales from worthy and proven, even if ageing adversaries, with one ace up its sleeve, its a ‘Mahindra‘.