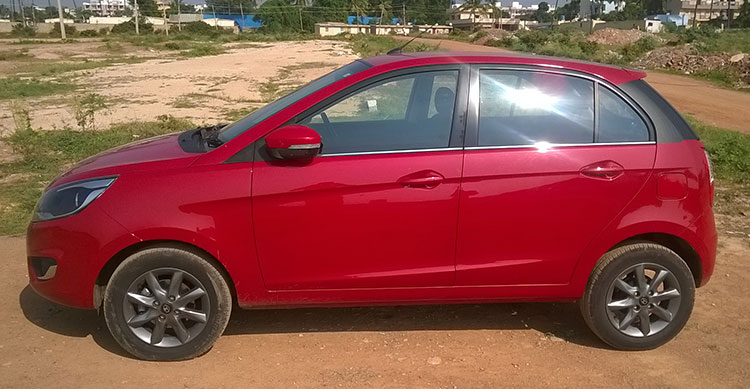 On a clear Friday morning, we laid our hands on Tata Motor’s more recent hatchback offering, the Bolt whose claimed USP is the new Revotron turbocharged engine in the petrol engine, and the Quadrajet 1.3 litre engine with the common rail direct injection system in the diesel variant. We chose to drive the diesel Tata Bolt as we are based out of Bangalore where it is natural for buyers to accord more priority to diesel cars, than their petrol counterparts.

On first sight we found the car to be impressive, but on driving Bolt (the XT version) we are of the following view regarding the various nuances of the mid-range car.

Folks at Tata seem to have laid good emphasis on the Bolt’s looks, the car incorporates the Tata signature grill that comes with a Piano Black finish. This design spreads on to the headlamps which go well with the outer theme.

This design makes the Tata Bolt similar to the Zest, and the overall outer design is sporty which should attract eyeballs and stand out from the crowd.

Even the fog light designing and ergonomics sync with that of the outer ergonomics thus making the Bolt attractive to look at from the front. 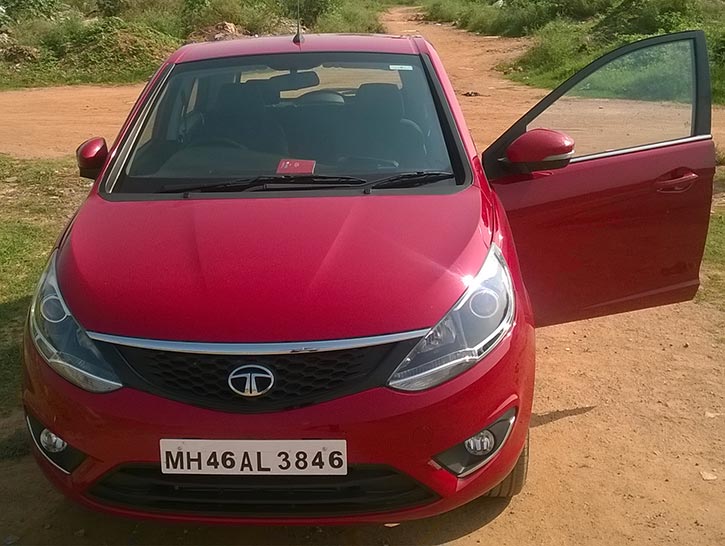 The car has got flame-shaped tail lamps on the rear that add to its sporty looks.

The car looks even more attractive from the sides, with a wraparound effect created on the roof via the Matte Black C pillar that elongates the Bolt’s overall look.

The Matte Black C pillar has given the car an overall floating roof that extends up till the rear windshield.

Our rating on outer looks, styling and ground clearance:

(A point is reduced since the Bolt’s front styling appears to be a direct lift from Zest).

Tata Bolt will disappoint people with its overall pick-up capabilities especially when driving in city conditions. A city like Bangalore requires that its cars come with good pick-up, by the way, the duration of traffic signals is pathetically long in the city (as traffic signals and people controlling them seem to have gone gone haywire), so its only natural that people get out of traffic before they are stopped again. 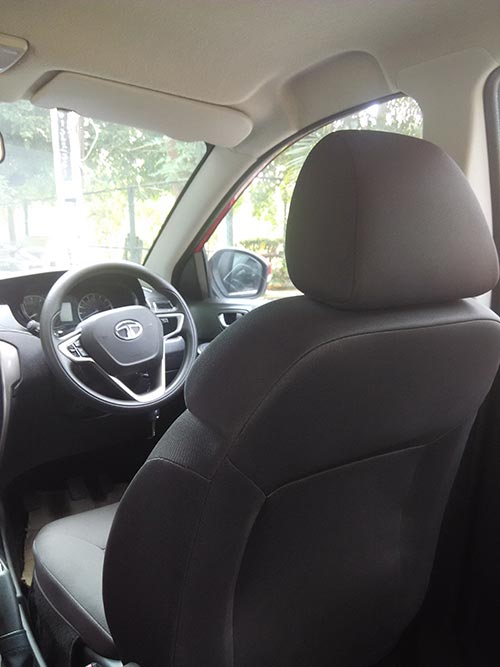 Tata claims that the Quadrajet 1.3 delivers a raw power of 75 PS, but we had to rev-up the engine at 3,000 rpm in the second-gear to get the vehicle moving at 20Kmph.

However, the car picks up considerably when nearing 5,000 rpm at higher gears. But, this scenario requires considerable patience from drivers. With a lag in pickup at lower gears, drivers could be subjected to constant honking from vehicles behind, especially in city conditions.

But the vehicle impresses on highways, as it can be made to sail at a steady speed, thus making it suitable for long drives (trips) on national highways (on state highways withs cant traffic the car lags), rather than usage in city. The Bolt could get into the minds of office-goers in the city with its inferior engine pickup.

The engine also emanates a whirring noise, an aspect which travellers of the Tata Indica are accustomed to. 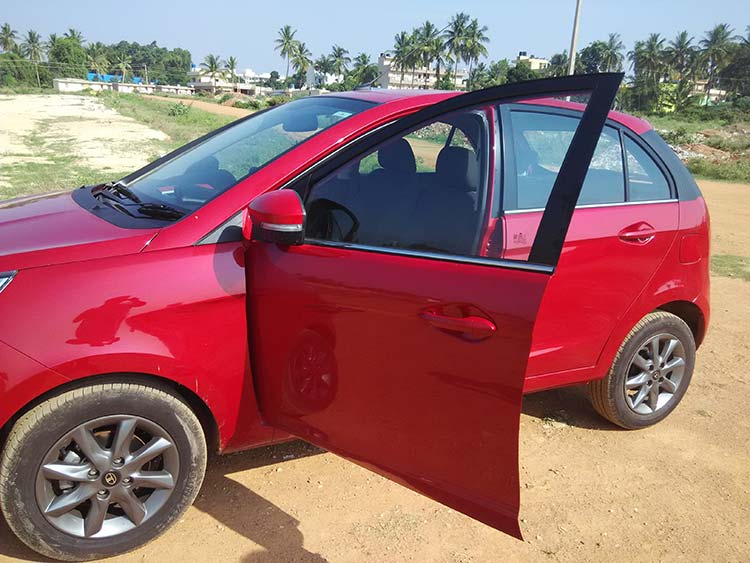 During our drive, we found it very difficult to touch 60 Kmph on the Bangalore-Mysore highway which sees scant traffic at all times in the day. Getting to 80 Kmph seems like a herculean task in Bolt, which is quite contrary to its name.

The gear transmission worked smoothly though and without friction, with the car’s built-in gear-shift indicator one can easily control the speed and sync the vehicle based on current traffic conditions with little effort.

But these aspects are no substitute for the poor engine-responsiveness and inferior pick-up.

Overall, the overall responsiveness from the engine is less, thus making the car a below-average performer in high traffic/city conditions.

However, on the brighter side, the steering is comparatively easy to control and is not stiff which should impress women drivers.

We could also experience superior suspension, and the car easily counters potholes/uneven roads with little or no jerking effect. These aspects should offer the elderly lots to cheer about.

Our rating on ease of driving, engine performance and intuitiveness 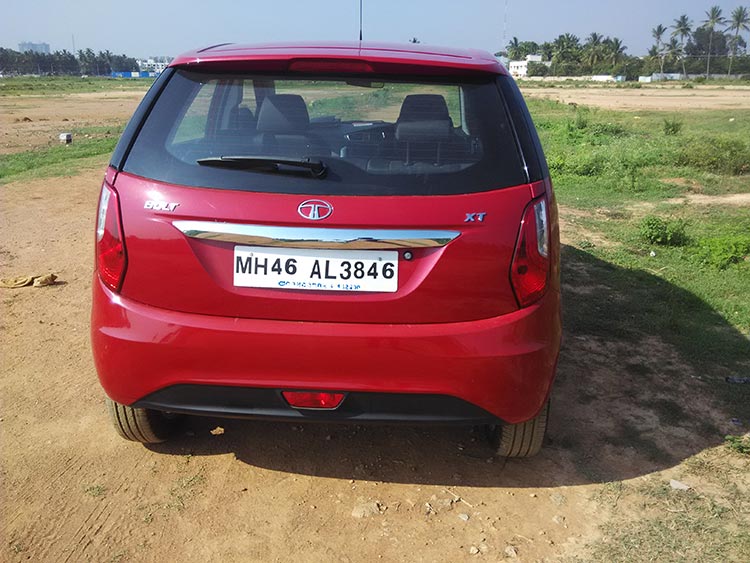 The feel and comfort

With low pickup and response, the Bolt is best suited for experts, rather than first-time car buyers. The vehicle is best used for long distances and when going on family outings.

We would recommend Bolt for users who already have a “city car” but want one to go on vacations. However, these users would have to make-do with the disappointing engine performance whenever heavy traffic conditions are encountered.

The interiors of the car give off a feeling of good ambience and the car comes with sufficient leg room for tall drivers. However, the head room could prove a tad less for taller people. 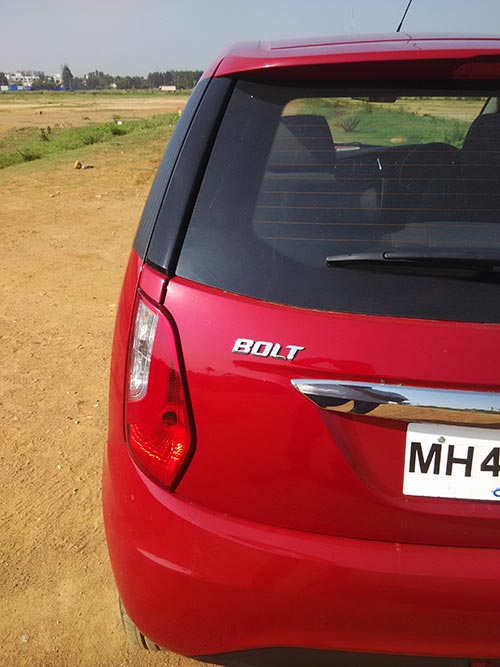 Nonetheless, the Bolt scores in the comfort aspect, which means that both drivers and passengers alike will not feel the strain that is characteristic to most hatchbacks.

Bolt XT comes with fully automatic AC with controls on the touchscreen, and its infotainment system impresses with its multitude of features including the SD card support. But we found out that the AC takes a significantly longer time to dispense conditioned air in comparison to AC systems found in similar cars such as the Maruthi Suzuki Swift, Swift Desire and the WagonR.

The infotainment system which is only present in the XT variant of the car is a pure rejoice. It enabled us to pair our smartphone to play music, place phone calls and even had an option to run the navigation apps. The sound quality from the music system was fairly good. The music controls, phone dialling options were neatly integrated into steering wheel – providing an easy access to the driver to make and receive calls and control the music. The infotainment system also has capability to play and display videos, which is not a good thing from safety point of view.

Our rating on feel and comfort

During our drive we determined that the Bolt returns an average of 18 Kmpl (approximately) while driving in city conditions and nearly 21 Kmpl on highways.

Our rating on fuel economy

[All prices are ex-showroom Bangalore]

Verdict: Tata Bolt is not a quintessential city vehicle. Buy it if you are a frequent traveller on national highways and obsessed with fuel economy.

[…] Tata Bolt – a recently launched car from Tata Motors is powered by a 1.3-litre diesel engine. The car can deliver up to generate a peak power up to 74 bhp and can deliver a maximum torque of 190 Nm. Bolt provides a mileage of 22.3 Kms per litre and has one of the best outdoor designs. Tata Bolt is best suited for long rides according to our review which was based on our Test drive of the car. […]

[…] – and adapts accordingly to suit the traffic flow. We kind of observed this feature on our recent test ride of Tata Bolt in India. What ACC does is, it accelerates the vehicle, throttles back and brakes the car and […]

[…] the month of May revealed that Tata Motors’ Passenger cars saw a growth of 32%, Tata Zest and Tata Bolt being the major contributors of this growth. Not only this, the Indian Auto maker showed a strong […]

I visited your blog. The pics are nice… Thanks for sharing and explanation about Fiat-engine…

[…] company plans to launch 2 new products. This year, Tata has already come up with two products like Tata Bolt and Tata Hexa. Along with this, Tata plans to introduce many upgrades on its existing product […]

[…] of aggressive and highly engaging marketing campaigns for its new generation products like Zest, Bolt and GenX Nano, Tata Motors is all set to make huge strides in marketing its new product line-up, […]